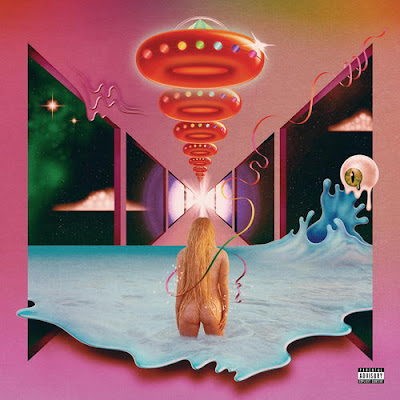 The year is 2017 and I am, in earnest, listening to the new album from Kesha.

In the very early days of this blog, I had a lot more time to commit to listening to just about anything that came along, so that meant I wound up listening to a lot of pop music—things I normally wouldn’t have gone for, like Miley Cyrus, Katy Perry, and Justin Timberlake.

In subsequent years, I’ve had a lot less time (and for awhile there, energy) to commit to listening to any ol’ album that came along, which is why the post count has been on a sharp decline since 2014, as well as why the variety of things I’ve reviewed is not as wide as it once was.

Truthfully, I think my interest in commercial and mainstream pop music has come and gone, however, I opted to listen to Kesha’s new album, Rainbow, her first in five years, due to morbid curiosity, but also because of the mythology surrounding it, and that, at times, threatens to overshadow it.

The end result of a very long, public, and painful legal battle with her former producer, Rainbow can, for better and for worse, mostly stand on its own—though it, unfortunately, owes a lot to what Kesha (born Kesha Rose Sebert) lived through over the course of the last three or four years.

Additionally, it tries to introduce Sebert as a singer and songwriter, rather than just a product, or a pop star; it tries to reconcile who Sebert used to be with who she wants to be, as well as bridge the surprisingly narrow gap between Top 40 electro-infused pop music with someone who has deep roots in country music (Sebert’s mother was a songwriter for Dolly Parton, who makes an appearance late in the game on Rainbow.)

Knowing a little bit about Kesha’s backstory is helpful to understanding what she’s gone through, both personally and professionally, to get to this point. Formerly known as Ke$ha, she has been tied to producer Dr. Luke since 2005, when she signed with his Kemosabe label. After toiling away as a songwriter for others and a back up vocalist, she, along with Luke and uber producer Max Martin, assembled her debut album, Animal, powered by the club and radio ready single, “Tik Tok”—a song that introduced an idea of Ke$ha as a girl in search of a fun time, backed by obnoxious electro-tinged beats and a voice filtered through the heavy warble of auto-tune.

The follow up, Warrior, arrived two years later, and since 2014, Sebert has been involved in a massive and confusing lawsuit with Dr. Luke—alleging that he drugged and sexually assaulted her, as well as verbally and emotionally abused her throughout their time working together.

In light of the release of Rainbow, The New York Times has kindly put together a relatively concise and easy to understand piece that breaks down where things are at with Sebert’s battle with Dr. Luke, and how, despite her best efforts, her career is still tied to him for the foreseeable future.

With that being said, Rainbow is an album about liberation—or, at least, being as liberated as one can get in this extremely difficult situation she’s found herself in the center of. It’s the kind of self aware and confessional record that presumes you, the listener, have been following along in the news for the last three years, and have at least some kind of working knowledge of the compelling backstory surrounding this material. At its core, it’s a story about survival, and the unfortunate compromises one has to make in order to survive.

Rainbow opens with a song that serves as a thesis statement of sorts—“Don’t let the bastards get you down,” Sebert sings with a smoky voice on the aptly titled “Bastards.” “Don’t let the assholes wear you out,” she continues, over a loosely strummed acoustic guitar that explodes into a twinkling, soulful stomp near the end.

“Bastards” sets the stage for what you can expect from the rest of the album—it’s stylistically all over the place, and its rough around the edges. Sebert always was a little bawdy, but on Rainbow, she’s operating without a filter, and the Advisory Content icon slapped onto the album’s cover (more on that later) isn’t a joke.

She’s not here to fuck around—“I’m a motherfucking woman,” she boasts proudly on the aptly titled, “Woman,” an electro-soul-funk blast featuring the horn section from The Dap Kings that is also one of the album’s most accessible, upbeat, and catchy songs, even though she (possibly intentionally) flubs a bunch of lyrics in the second verse while laughing. “Woman,” like a number of other songs on the record, also relies on the somewhat cloying device of including her studio chatter into the microphone prior to the beginning of the take.

It seems worth mentioning that, in the effort to introduce herself as a singer and songwriter as opposed to a product, Sebert works throughout Rainbow to try to find her voice—both literally and figuratively. She spent the early days of her career singing through the thick manipulation of auto-tune, so many of her critics presumed that she probably couldn’t sing all that well. That, however, is not the case, and Rainbow sets out to prove them wrong.

You can still hear the slight warbles of the auto-tune software here and there on the album if you listen closely, but as a whole, Sebert goes for it on her own; she is at least aware of her own limitations, and tries to work within those while still finding a powerful voice.

The answer is it’s not great, but it’s not terrible.

It is a record that exists, and it will certainly please Sebert’s longtime fans and supporters, and for those who have been just kind of casually following along every time Pitchfork mentions “Kesha lawsuit” in a headline—those people may find something here as well (though the ‘fork panned this pretty hard upon its release.)

Like so many pop albums in the world, Rainbow suffers from being uneven, and frontloaded with a majority its most vibrant material before sputtering out of energy near the end. While Sebert does try to bring some originality to this collection, even though she has been noticeably absent from the Top 40 charts for the last five years, songs like “Hymn” and “Learn to Let Go” take a number of cues from mainstream pop music of the day.

Sebert has always been a bit of a pop music oddity—a wildcard who didn’t take herself too seriously. Even with all she has been through, she maintains a very strong sense of humor on Rainbow, and that shows in a number of the stranger, less focused songs that arrive near the end, as well as having the audacity to put out a record that features guest spots from Dolly Parton and the Eagles of Death Metal, and appear bare assed on the cover, Photoshopped into a bizarre, psychedelic landscape similar to that of Nick Hakim’s album from earlier this year.

Even with all its flaws and possible gimmicks, the album is structured around its show stopping centerpiece—“Praying.” Released as the first single, for four minutes, Sebert will demand your attention, knock the wind out of you, and send frisson through your body.

The word “powerful” does “Praying” a disservice, because it doesn’t even come close to describing just how much visceral emotion and catharsis Sebert has poured into the song. Throughout Rainbow, she does her best not to share the identity of her antagonist—many of the more serious songs are directed simply at a “you.” She’s banking on the listener to put together who that “you” is. “Praying” sets direct aim on that “you” (Dr. Luke) and fires—“You told me that I was nothing without you,” she laments in the song’s opening verse, following it with the stark “We both know all the truth I could tell,” a few lines later.

Delivered over a somber piano, the song literally explodes in the second refrain, when a soulful choir and a kick drum that resonates hard with every beat arrive to support Sebert, who howls with an otherworldly and longstanding pain in her voice.

The year is 2017, and I never thought I would say that Kesha is responsible for one of the finest songs of the year, but here we are.

Rainbow is not for everyone, though it’s an admirable effort on Sebert’s part to return from the brink of absolute ruin and prove how strong she is. “I know that I’m perfect even though I’m fucked up,” she half-raps, half-sings on the trap leaning slink of “Hymn.” It’s a hell of a lyric, one that kind of sums up the record in a way—after being dragged through hell, she came out on the other side, stronger and exponentially more confident than she was before.

Rainbow is out now digitally and on CD via RCA. The vinyl is expected to be available in late October.