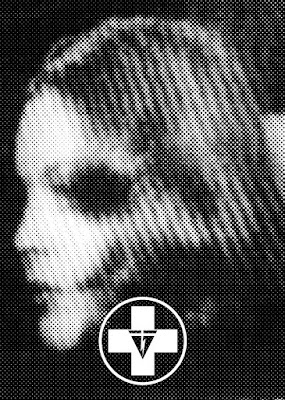 How many times have I completely slept on a new release from the Tape Loop Orchestra and either a) paid an inflated price off of Discogs to track the album down, or b) run crying to TLO mastermind Andrew Hargreaves in an email, seeing if he still had any copies left he’d be willing to mail to me?

At this point, you’d think I would check this dude’s Twitter every day to see if there is any mention of a new TLO release, but any announcement he does make now just  gets lost in the shuffle of all the shit about Donald Trump that clogs up my timeline.

I narrowly missed the announcement about the latest Tape Loop Orchestra release, Instrumental Transcommunications, but luckily, the gawd himself was kind enough to hook me up after I threw some cash at him via Pay Pal. Already out of print, and already going for $43 on Discogs, the collection is comprised of one fifty-minute composition, backed with an eleven minute piece originally created for use on Hargreaves’ last TLO effort, The Invisibles, released at the tail end of 2016.

The titular piece was originally commissioned for the Netherlands based Red Light Radio program. Not so much a “new” composition, “Instrumental Transcommunications” is self-described by Hargreaves as “collection of fragments and reference points from my audio notebooks: voices from the other side, soundtrack re-edits, the wisdom of Sun Ra, faulty toned radio transmissions, cult leader shout outs, TLO experiments and a few other audio morsels.”

Due to this nature, what it lacks in cohesion and focus, it makes up in innovation. And whether it was intended or not, its “sound collage” aesthetic pushes the music of the Tape Loop Orchestra into uncharted, unsettling, and startling territories.

Pulling together the usual TLO fare of decaying samples, ethereal vocal swooning, and somber string swells, Hargreaves’ tosses in additional material supplied by vocalist Beth Roberts, who contributed to The Invisibles—by looping her phrasing in an eerie, off-kilter way, it creates something both hypnotic and unnerving. The inclusion of other spoken word pieces, garbled underneath waves of static, also help to create a tension that runs throughout its entirety.

The sheer magnitude of a collage like this may be intimidating to some listeners, and at times, it can be an overwhelming listening experience, but for longtime fans of Hargreaves’ work under the Tape Loop Orchestra, it is a very worthy endeavor.

Serving as a b-side of sorts is “Inter-Frequency Energies,” eleven minutes of very dramatic, chilling string sweeps that eventually give way to a somber echoing sound, which carries you to the piece’s final moments. Pensive, and truly evocative nature, it would have fit in nicely had it been included on The Invisibles as intended.

For a project that, at one time, had been shelved in favor of focusing on other work, Hargreaves has seemingly hit a prolific streak with his efforts as the Tape Loop Orchestra. Each release is similar in tone yet wildly unpredictable and original in the way it has been executed. There has not been a Tape Loop Orchestra effort that I haven’t been astounded by, and Instrumental Transcommunications is no exception.