Album Review: A Crushed Rose - Someone is Looking Out for Us 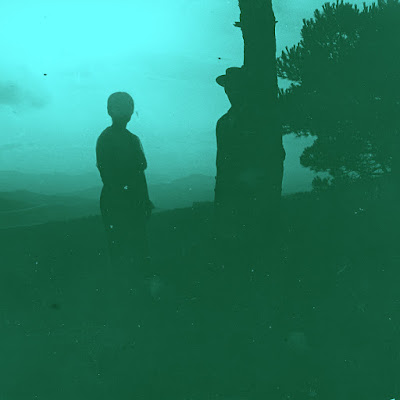 At the beginning of 2018, Alisa Rodriguez, the ambient/experimental guitarist from Milwaukee who primarily preforms under the moniker Apollo Vermouth, sent out on tweet announcing she had recorded a new album under the name ‘A Crushed Rose.’ While she was looking for an underground or cassette based label that would work with her on releasing it, she had asked if anyone wanted a link to the private Soundcloud page to listen to the record—Someone is Looking Out for Us.

At one time a seven-track affair, over a year later, Someone is Looking Out for Us found a home via the prestigious Chicago-based label Patient Sounds (the imprint she was hoping to work with from the beginning) and is now a five-track meditation of deliberately paced, icy, and ethereal drones that are, at times, so breathtaking in their evocative nature that they seem to be coming to us from deep within a cavern from another world—and they are so haunting and devastating that we do not deserve to listen.

When my copy of the cassette arrived in the mail, I was at first a little confused by its length—I could have sworn the album was originally longer. I reached out to Rodriguez to ask if I was mistaken, and she explained two pieces had to be cut from the release in order to fit within the confines of a C-60 tape. Those tracks—“I Carefully Burned The Past (Part One)” and “A.M. Light,” she explained, were the two earliest pieces she had constructed for this project, and felt they were the weakest of the set.

Serving as the full length debut under the name ‘A Crushed Rose,’ the press materials for Someone is Looking Out for Us on the Patient Sounds website describes this as an album made ‘without playing instruments.’ Recorded in 2017 after Rodriguez returned from an Apollo Vermouth tour, the album was put together and manipulated through the use of audio editing software—a surprising factoid regarding the composition of the record considering how organic it sounds. The fact that it sounds so effortless and natural can be contributed to the imaginative and downright masterful grasp Rodriguez has ambient and experimental arranging, and the patience that she has when it comes to crafting and sustaining pensive, haunting tones.

“Rite of Passage,” the album’s opening track, slowly rises from the distance, and within the first minute, it’s grown into a rumbling, gorgeous cacophony. It, like the other tracks on the record, seem to endlessly swirl around you once they get going, almost taking on a life of their own as they engulf the listener. “Rite of Passage” does just that for a little over three of its nine minutes—this isn’t the kind of ambient or experimental music that you just toss on in the background if you want something non-obtrusive playing while you’re reading; no, this is active listening, because it, like so many other successfully executed instrumental albums, becomes more than itself—it becomes an experience that you are a part of.

Three minutes into “Rite of Passage,” short warbled noises—akin to adjusting one of the knobs on a delay pedal—send shockwaves through the atmosphere created—interrupting whatever kind of meditative state the piece had put you in. Following this, you can tell that things begin to shift slightly into more dissonance, as louder, and sharper tones of feedback begin to take over—it doesn’t making things ‘harsher,’ but it does make the track suddenly become much more urgent.

One of the other surprising elements of Someone is Looking Out for Us is Rodriguez’s ability to distinguish these compositions as A Crushed Rose, from her output as Apollo Vermouth. You may think that ‘ambient music is ambient music,’ especially when it’s put together by the same person, but just released under a different name—however, there is something very different about the overall affect of this release when compared to her last record as Apollo Vermouth, 2017’s excellent Crashing Into Nowhere.

There’s a very fragile, lonely, and sad feeling that runs throughout Someone is Looking Out for Us, even when Rodriguez takes it from the slow, ethereal rolling waves of “Sleeping Apart,” into the unnerving, Lynch-ian discord of “I Carefully Burned The Past (Part Two)”—there is still a very visceral, tangible sensation of sorrow built into every track. It’s impressive, yes, that someone is able to pack that kind of emotion into wordless music, but it’s also dangerous, because at times, it can also be just entirely too much—too overwhelming if you aren’t prepared.

There is a minor moment of reprieve from just how heavy duty this effort is—arriving on the album’s second half, the nearly 13-minute “Ocean Itself” is a bit of a departure, tonally speaking, from the other four tracks selected for inclusion.

“Ocean Itself” is the only track on Someone is Looking Out for Us that includes percussion of any kind—a low, fast, and steady rhythm pulses underneath all of the swirling noise and effects, arriving like the sound of someone bouncing a ball, over and over again, in another part of a sonorous old house. While the beat itself may be secondary, or at least buried deep within the mix intentionally, the focus of the track is the myriad swirling, glistening, sweeping sounds that unrelentingly spiral around. It’s a fascinating piece, actually, simply because there are moments when it seems like the steady thump of the beat is not totally necessary, or that it isn’t lining up exactly with what else is occurring around it; but it works surprisingly well, even when it creates a dizzying and sometimes disorienting environment.

And it’s a shockingly jubilant retreat, albeit temporary, from the overall stark and downcast tone of the rest of the record.

Someone closes with its shortest composition, but also one of its most powerful. At six minutes, “Unconditional Love” works swiftly to build a glitchy, desolate soundscape—an environment that casts a very long, dark shadow, and as it fades into the distance, provides little, if any resolve—though the same can be said about the tracks that precede it.

It goes without saying that Someone is Looking Out for Us is one of this year’s finest—not only among ambient and experimental music, but just ‘music’ itself—keep in mind that Crashing Into Nowhere was one of my favorite records of 2017. I hesitate to say that through these five pieces, there is any kind of catharsis for the listener—it’s unfair to look toward instrumental music for ‘answers,’ but even if there were, Rodriguez isn’t offering up any. It’s the kind of record that leaves you transcendentally lost in thought, and even though it’s nearly an hour long, as soon as those final moments of “Unconditional Love” fade out, the experience has come and gone so quickly.

If you’re like me, you’ll find yourself starting it all over again.