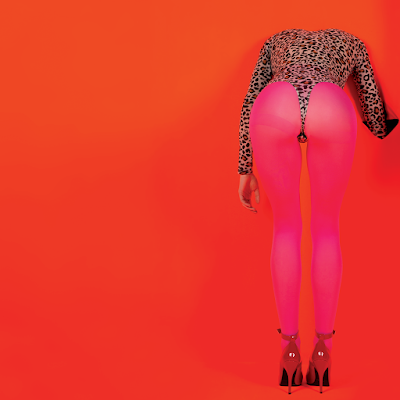 Something to keep in mind while listening to MASSEDUCTION (yes it is one word, all capitalized), the challenging, dense fifth album Annie Clark has released under her St. Vincent moniker is just how far she has come in a decade.

After stints in both the Polyphonic Spree (remember them?) and Sufjan Steven’s Illinois-era touring band, Clark released Marry Me, her auspicious, precious, and precocious debut in 2007. With each subsequent solo release (not counting her one-off experiment with David Byrne), Clark has both built up, and stripped away layers of herself, and her sound.

Marry Me was on my long list of albums celebrating milestone anniversaries this year that I had every intention of writing wordy thinkpieces/reflections on, but I could never just find the time. From what I can recall the last time I listened to it, it has aged surprisingly well, however Clark’s edges are not as sharp yet—though it is still caustic, dangerous, and at times, whimsical and theatrical pop music.

Her edges have grown sharper, and the music more difficult, over the last ten years. On her last outing, 2014’s self titled, she bleached the pigment out of her curly mess of black hair, donned capes and cowls, and transformed herself into some kind of cult leader from the future. It was her least immediate album as far as the songwriting, but it was her most fully realized to date—multi-layered and at times frustrating, as Clark traded in her trademark electric guitar dissonance for synthesizers and drum machines, creating a cold and mechanical atmosphere while she immersed herself in the role.

MASSEDUCTION is a lot of things—it’s her most personal yet, but it is still guarded—as she’s almost always been. It finds her collaborating with go-to indie pop hit maker Jack Antonoff, of fun and Bleachers fame, who has worked with everyone from Taylor Swift, Lorde, Adele, and How to Dress Well’s Tom Krell. It finds her conjuring the spirits of fallen idols—she’s always been referred to as ‘the female David Bowie,’ and you can hear his artistic fearlessness and restlessness resonate throughout in the character and persona she is embodying this time around. You can also hear echoes of Prince—from the distorted guitar theatrics that pepper the album, to the slinking and slithering electro-funk, and most importantly, the conflicted sensual and sexual nature of a number of these songs.

Clark has always been a private individual. I can recall an interview in 2011 around the time Strange Mercy came out, where she blushes at the idea that the lyric “I spent the summer on my back” is about anything other than depression. This, though, coming from an album that opens with a vignette about visiting a dominatrix. Six years later, Clark is still grappling with who she is and what she wants as a sexual being, or if she even is one. She’s tried to project a veil of androgyny at times, though within recent years, she’s been linked to and photographed with a number of famous women including Carrie Brownstein, Kristen Stewart, and Cara Delvingne. Clark has never publically spoken about any of these relationships, though it is all too easy to wonder how many of the songs on MASSEDUCTION are about them.

After all, Clark said the album is about ‘sex, drugs, and sadness.’

The album opens with a drunk phone call—“Hang on Me” is woozy, swooning last chance plea. “You and me, we’re not meant for this world,” she sings through crackling vocal distortion, assuring that if her lover takes her back, this time it’ll be better. “I cannot stop the taxi cab from crashing, and only lovers will survive.”

MASSEDUCTION careens head first into the electro-shocking funk on one of the album’s many ‘pop’ songs—“Pills,” which is probably going to be one of the most polarizing of the set. Featuring Delevinge on backing vocals, it was produced by Top Dawg Entertainment beatmaker Sounwave and is one of the album’s most personal, though dressed up as something infectious and moderately cloying (the song’s chorus.) Clark herself admits it’s about small period of her life, and even with its faults, it’s surprisingly honest and raw (lyrically speaking) and the music is arranged in such a way to pull the listener into Clark’s whirlwind.

Clark keeps that charged energy level up with the triple shot of the album’s titular track, the pulsating “Sugarboy,” and the album’s bombastic second single, “Los Ageless.” It is also here that Clark continues on with the running themes of the album—“Los Ageless” tackles the end of a romance: “How could anybody have you and lose you and not lose their mind?” she bellows during the song’s refrain. On “MASSEDUCTION,” she is unrelenting with the sexual conflict and imagery—“I can’t turn off what turns me on,” she coos, and then later, sings of ‘teenage Christian virgins, holding out their tongues.’

MASSEDUCTION is structured in such a way that it allows for a slight reprieve from the highly energetic first half—however, in that reprieve is the album’s darkest and most visceral moment. Clark won’t discuss who the ‘Johnny’ in her songs is. The name has been mentioned a number of times throughout her canon, most recently on “Prince Johnny.” Here, on “Happy Birthday, Johnny,” she drops the St. Vincent character completely, addressing herself as Annie in one of the starkest lines, and throughout the tender ballad, you get the sneaking suspicious that Johnny is a member of her family. If he is, if he isn’t, if he’s real at all—“Doesn’t everyone know a Johnny?” she said in an interview—it’s one of Clark’s most haunting compositions, proving she’s one hell of a songwriter and evocative storyteller.

The album’s second half tosses you right back into that conflicted, grey area of ambiguous sensuality. “Savior” paints explicit portraits of kink and sexual fantasy, though it is tough to surmise if it’s a metaphor for fame and idolatry.

“New York” was the album’s first single—released long before the announcement of MASSEDUCTION. Musically speaking, it’s uncharacteristic of Clark. Structured around a rollicking piano line and a huge, sweeping chorus (thanks Jack Antonoff), it can be seen as the inverse or at least a companion piece to “Los Ageless”—still a ‘big’ pop song, though not as obvious in its execution. It’s catchy, and fast moving, swirling around what Clark calls ‘her entire life in a song.’ It’s also clear on “New York” just how comfortable she’s become working profanity into her music. It’s something she’s been slowly experimenting with—changing the “roughed you up” to “fucked you up” from “Strange Mercy” when performed live, and including an f-bomb somewhere on St. Vincent. There’s enough language throughout MASSEDUCTION that my wife wondered if the record came with an advisory lyric sticker (it doesn’t)1 but Clark muses on the idea of pills in order to fuck, ill-fiting leather clothing she refers to as shit, and on “New York,” addresses someone as the “only motherfucking in the city” who will handle her, stand her, and forgive her.

If MASSEDUCTION is a record about sex, drugs, and sadness, we’ve covered the first two quite a bit already—it’s the sadness that arrives as the ending with the simmering and haunting (literally and figuratively) ballad “Slow Disco,” and the album’s final track, “Smoking Section.”

“Slow Disco,” structured around a somber string arrangement, is a remorseful, heartbreaking tale, with Clark recalling the parting of ways with one of her partners—“I’m so glad I came, but I can’t wait to leave…Slip my hand, from your hand/Leave you dancing with a ghost.”

“Smoking Section,” too, is somber and haunting—but in more menacing, unnerving ways. With piano treatment by Thomas ‘Doveman’ Bartlett and weighty percussion, the song quickly becomes a dirge that leads you to the abrupt and conflicted ending of the album. “It’s not the end,” Clark sings, in a fragile, high register—but it is. It creates a moment of self-awareness, simply because the record is, in fact, over, but also it creates a small glimmer of hope, though throughout MASSEDUCTION, there is no resolution. Nor does there need to be, really.

MASSEDUCTION is already an album that has confounded listeners and critics. Consequence of Sound gave it high marks; Pitchfork all but panned it. Upon initial listens, it’s much more of an immediate and urgent album when compared to St. Vincent, though long gone are the days of the more accessible and slightly idiosyncratic albums like Actor and Strange Mercy. This record doesn’t so much work to bridge the gap between ‘art rock’ and ‘art pop,’ though it stops just shy of creating more space between the two areas. Clark still wants to keep you at an arm’s length, but she’s also being seduced by the idea of letting her guard down ever so slightly, and the fragmented yet personal and sexually charged imagery of this record shows her conflict as both a person with a private life and a successful musician.

These are difficult times we live in and MASSEDUCTION is a difficult album that, despite its contemporary pop music trappings, will take patience and time to unpack and process.

1- It seems worth noting that both “New York” and “Pills” are branded with a red explicit E in iTunes, and that the album itself does feature a bent over ass on the front cover (it’s not Clark’s ass, don’t worry.)