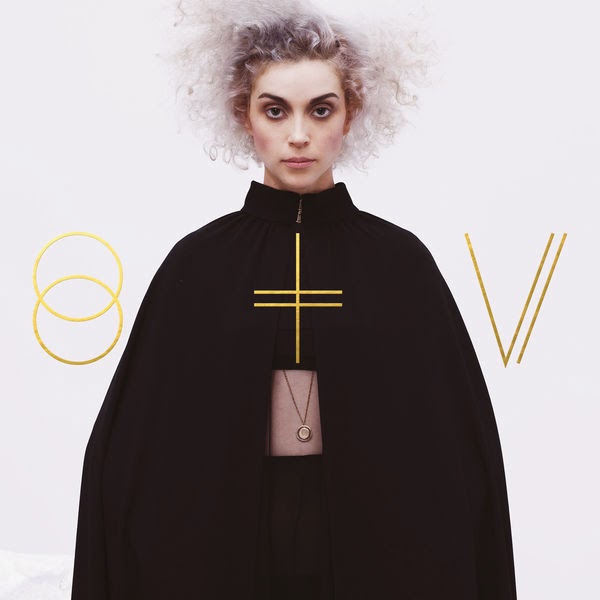 The arrival of the expanded, deluxe, whatever edition of St. Vincent’s self titled 4th LP could not come at a better time—for starters, it’s arriving roughly a year after the album itself was release. And what better way to commemorate the first anniversary of a recorded selection of songs than to buy that very same collection again, but with a few additional tracks that didn’t make the cut the first time around tacked on at the end.

But also, less cynically, and more importantly, is St. Vincent’s big GRAMMY award win on Sunday night for “Best Alternative Album.” In an email sent out to those who still sign up for email lists, the gawddess herself, Annie Clark, details her meager beginnings in 2007—signing to 4AD, early disastrous tours, performing without a band to back her, etc. It’s a heartfelt and human expression coming from a woman who has somewhat transcended all of that to become some kind of “musical being”—an affect projected courtesy of her bright white hair, “cool space queen” costumes, and her robotic stage movements when performing live.

It’s a reminder of just how far Clark has traveled in roughly seven years.

St. Vincent, as an album, wasn’t so much a departure, or a risk, but it was maybe the next logical step for her—a restless artist continuing to push herself with the statement she was making. Less guitar-oriented than anything else she’s done, it focused on evocative, timely lyrics and groove-oriented sonics.

So here we are, with the deluxe edition, or whatever, of St. Vincent, including one “unreleased” song, the two tracks that made up her Record Store Day 2014 7”, a b-side, and a remix to “Digital Witness” (which is pretty fucking terrible, by the way.)

I hate to sell this stuff short, but usually, there’s a reason that songs end up on the cutting room floor, demoted to either being never heard, or turning up as a b-side, or as a “bonus track” on an international version of the album, or the iTunes edition.

That being said, the four original tracks are cut from St. Vincent’s cloth—fuzzy, crunchy, compressed guitar theatrics, along with more wonky Moog synthesizer bits, with the focus on this being on “dance music you could play at a funeral”—her words, not mine, in describing the vibe on the album in the first place.

“Bad Believer” is one of the poppiest things Clark has ever done—with the emphasis being on just sounding incredibly “big” with a “big” catchy hook: “What do you know? I’m just a bad believer. What do you know? What do you know-ah-oh oh?’ It’s like some kind of alternate universe Top 40 hit just waiting to happen.

“Pieta” and “Sparrow” are pulled from Clark’s RSD 7”—a tradition she’s carried on for a few years now. “Pieta” pulses along thanks to very tribal sounding percussion—this would actually not sound out of place on that Atoms For Peace album that Thom Yorke made in 2013. It has a very “afrobeat” inspired feeling. While “Sparrow” doesn’t so much pulse as it writhes and convulses—heavy, wonky keyboards weigh it down while Clark tries to soar above with her higher, breathy range. Both of these songs are taken from the St. Vincent sessions, but somehow both of them feel like they wouldn’t have fit in with the album’s sequencing. “Sparrow” is way too gloomy—there’s nothing in the album that is as dark sounding, not even the slower ballads like “Prince Johnny” or “I Prefer Your Love.” “Pieta” on the other hand, wouldn’t sound that out of place, but as far as a “beat” oriented track goes, it’s not nearly as quickly paced as songs like “Bring Me Your Loves.”

Finally, we’re presented with “Del Rio,” a b-side and an additional track that was thrown on at the end of the Japanese edition of St. Vincent. Of any of the material presented here on this expanded edition, “Del Rio” sounds most sonically in line with the material from those sessions, and would not actually sound so out of place filed in somewhere on the album—it slithers and shuffles along, heavy on the scuzzy, blown out sounding synth lines.

It, like “Bad Believer” is focused primarily on memorable refrains—“Del, Del, REEEE OHHH,” is all that we find here, sandwiched in between a narrative about a day out with a friend in the town of Del Rio, TX—or possibly the whole thing is just a metaphor for the town itself. Who knows, really?

With these songs arriving a full year after the fact, it seems kind of hard to put them in the context of the St. Vincent album itself—something that has become pretty self contained after one has spent this much time with it. It works as an 11 song album, structured pretty deliberately, and trying to factor in this extra stuff is an idea that just doesn’t exactly work.

Also, while none of these songs are bad (except that remix), they aren’t great, so, again, it’s easy to see why they were left off of the record and released through other means.

In my original review of St.Vincent, I talked a lot about her artistic growth over the last seven years, bringing her to the “artist” that she is today, leaving behind the girl with nice cheekbones who graced the cover of Marry Me so many years ago. From the thing she published at the beginning of the week, it sounds like it hasn’t always been easy being St. Vincent, and there is really no way to predict what kind of sound she will adopt next. These bonus tracks, much like the deleted scenes of a movie, show that difficult choices have to be made when putting out a record. You can have a stable of songs—but they can’t all be your “favorites,” and if anything, sharing these prove that Clark is an excellent, and self-aware, self-editor.

Thankfully, the deluxe edition of St. Vincent is only available digitally in the US via Loma Vista.