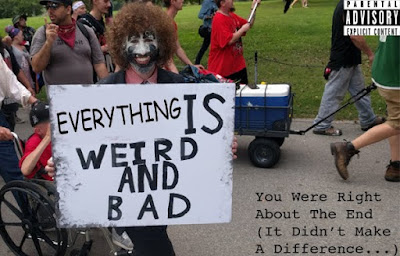 The other day, my friend Andrea put together a Spotify playlist. On Instagram, she asked for the top three songs people were listening to right now—not specifically 'pandemic' related, but, as she put it to me when I asked for a little more information, songs that were 'really hittin' right now. The mix is, as expected, incredibly eclectic (how do you get from Lizzo to Ozzy Osbourne in just one move?) but the way Andrea assembled is thoughtful—and it really works from start to finish.

Leading up to this, I had been thinking of putting together a mixtape for these times, but taking a different approach, I wanted to put it together using songs that have been on my mind lately throughout the last month, during the stress and uncertainty of 'dat rona.'

I was debating only making this a Spotify playlist because I'm guessing a lot of folks use that as a streaming service, and putting the mix together, as I was told, was very easy. However, there are around five songs that I needed to include (not want, but need) that are not on Spotify. That's how idiosyncratic I'm getting here.

So, you may check out the Spotify playlist version, which is 16 songs; the full 20 song list, as always, has been cut together as a seamless mp3, which you are encouraged to download and listen to as you are able, though I do understand it is not as convenient.

You Were Right About The End (It Didn't Make A Difference) - A Pandemic Mixtape (right click, save as, etc, you know the vibes.)

Love/Lana Del Rey
Wake Me When It's Over/Longwave
Daughters of The Soho Riots/The National
Caught A Lite Sneeze/Tori Amos
Try Not to Breathe/R.E.M.
We Found Love/Bats for Lashes
Preaching The End of The World/Chris Cornell
If You Never Say Goodbye/P.M. Dawn
Till The World Ends/Britney Spears
Job to Do/American Music Club
Great Fires/Billy Woods
Time Jesum Transuntum Et Non Riverentum/Nick Cave and The Bad Seeds
Line by Line/The Walkmen
You Were a Kindness/The National
Theme/World Leader Pretend
How to Disappear Completely/Radiohead
Appointments/Julien Baker
End of Our Days/Howie Day
Transatlanticism/Death Cab for Cutie
Hope is A Dangerous Thing For A Woman Like Me to Have—But I Have It/Lana Del Rey

* the songs in bold and italics indicate the tunes not available on Spotify.
Labels: mixtape