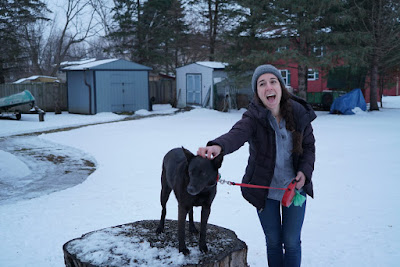 It's been a minute since I've written anything for River Valley Woman, the women's magazine based out of New Ulm that I have been an irregular contributor to since 2017. Sometimes, I'm not exactly certain where my writing fits into the publication, but toward the beginning of December, I saw something on the publication's Facebook page relating to the February issue being animal (or 'pet' and I really don't like that word) themed, and I had an idea to pitch and an essay to write—not about me, or our cat Ted, but about my friend Andrea, and her dog Chula, because their bond, and their story, is pretty incredible.

The February issue of River Valley Woman is out now in various locations around Southern Minnesota, as well as online (this piece is on page 51.) Thanks to RVW for publishing this one, and one million thanks to Andrea (and Chula) for humoring me and allowing me to tell this story.


A Bursting Heart (or, My Friend and Her Dog)

One of the things my friend and co-worker, Andrea, regularly says about her beloved dog, Chula, is that she makes her ‘heart burst.’

“It’s such a good feeling,” Andrea explained to me. “I can feel it in my chest—I love her so much.”

Any parent to a companion animal can say something similarly endearing, but with Andrea and Chula, there is a palpable affection anybody else in the room would hopefully feel as well.

Chula, roughly nine years old now, with a sleek coat of black fur, stoic, knowing brown eyes, and tall, pointy ears that could only be described as looking like those of a bat, is a ‘mystery dog.’ When somebody asks what kind of dog Chula is, Andrea has no answer—Chula was, at one time, a wild stray from Costa Rica, and the journey she took from there to Minnesota, as well their first few years together, make a fascinating, and at times, tumultuous story.

The beginning of Chula’s story, and her trip to America, is also the beginning of a budding relationship between Andrea, and her partner at that time, Alyson. “August 11th, 2012 is what we considered our ‘anniversary,’” Andrea recalled. “It was the day I got Chula, and the day I think [Alyson and I] unofficially started our relationship.”

They had met two months prior, on a research trip to Honduras; Andrea was in her final year of undergrad at the University of Minnesota Duluth, and Alyson was in a PhD program. “Alyson went to Costa Rica, which was one of the field sites for her PhD. It was in a national park, and Chula, months earlier, had wandered onto the park grounds.” The park rangers were not pleased about this, but the graduated students more or less stepped in and saved her, feeding her and allowing her to hang out in their camp.

When the grad students originally found Chula, she was emaciated, and had very clearly been physically abused.

“She was very scared of brooms, and certain men,” Andrea recalled.

When Alyson returned to Costa Rica to finish her research, she became concerned about what would become of Chula after the graduate students left; she started looking for a local family that might take her in, but was unable to find one. As Andrea recalls, Alyson then looked for somebody in America that would take Chula into their home—she was willing to pay whatever it took to get her there.

After some internal deliberation, Andrea said she’d take Chula, despite the concerns and reservations that come from the idea of bringing a wild dog into her life, and an originally unsupportive response from her parents—“I told them, and they were like ‘HELLLLL NO, you’re not getting a dog!”

Getting Chula out of Costa Rica turned into quite the endeavor—spayed shortly before departure, Chula ripped out her stitches the night before her flight to America; one of the students traveling with Alyson had previous experience as a field nurse, and stitched Chula back up, without anesthetic; and at the airport, upon trying to leave Costa Rica, more and more fees were being added on for taking her out of the country.

After originally arriving in Texas, Chula was shuttled to Minneapolis, where Andrea met her for the first time, and after an unpleasant encounter with a squirrel, she began wondering what she had gotten herself into.

There was also an early, ill fated attempt at bringing Chula to work at an outdoor research plot. “She ran around and didn’t listen to me; I had her on a leash, tied up, but then she chewed through that within 15 minutes, and started digging in the pots of the experiment,” Andrea said.

Andrea recalls the first six months of life with Chula being tumultuous. “There was a lot of me being like, ‘What did I do?’”

After graduating from college, Andrea relocated to Minneapolis and moved in with Alyson. “I was constantly saying that we should take Chula to obedience classes since she does have aggression toward other dogs and strangers; but then a year and a half passed and we moved to the country, and we were like, ‘Well, now we don’t need it.’”

Reflecting on the last seven years with Chula, Andrea said it sounds cliche, but life with Chula has taught her patience. “She taught me how to care for another being, even when it’s difficult.”

She also disagrees with the idea that dogs have unconditional love for the human in their lives, and added people who adopt any companion animals—wild, or otherwise, should have realistic expectations. 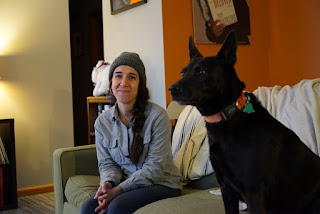 “Any relationship, with any being, is about the effort you put in—meeting needs, things like that,” she said. “And I feel like Chula has been a good lesson in that. You shouldn’t expect animals to be perfectly trained, and you need to keep in mind their history, and any potential traumas they’ve faced. They can only do the best under their own special circumstances.”

“If you have patience and understanding, like in any relationship, and show up everyday to be there and engage, what evolves is beautiful,” she added. “I wish I had this perspective when Chula first came into my life, but this is part of what she's taught me.”

Last spring, Andrea and Alyson’s seven year relationship ended, and Andrea, along with Chula, found themselves in a long, difficult time of transition.

“I feel like she gave me a purpose,” Andrea said. “Even when I felt like I couldn’t do anything because I was so sad and grief stricken, and I’d spend the day on the couch, I’d still took her for two walks a day. And I feel like that was huge, having her—another being—there for me.”

“Chula has been there for me during some of the hardest times of my life,” Andrea concluded. “She’s been my only constant for over seven years, and I owe her so much.”