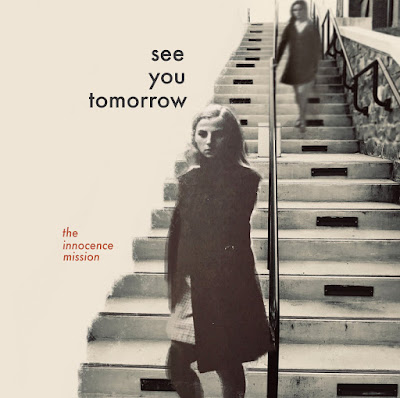 There are times when I’m listening to a song, and it doesn’t so much ‘really connect,’ but something will happen in it—a moment is created—and when that does happen, it’ll make me a believer, both in the song itself, and even if it is at times weighed down by faults or too much ambition, the album as a whole.

This has maybe been something I’ve felt for a long time now, but it’s something I’ve only become aware of very recently—in the late fall, with the song “Bright Horses,” from the minimal and haunting double album from Nick Cave and The Bad Seeds, Ghosteen. Not everything on that album works—it’s ambitious in scope and heart, yes, but it falters, especially in its second half. But there’s this moment in “Bright Horses” where everything just opens itself up to you—a god damn near perfect moment. It happens when Cave sings the lyrics, “And I’m by your side, and I’m holding your hand,” and the music does this thing where it swells up around him singing those words—singing them in a voice that is both strong an fragile.

I don’t know. It just makes this moment that’s really powerful, and compelling, and it instills a faith in you—like a really tangible feeling—that you’re along for the ride with the artist, and with the song.

The first of those moments—a moment that creates the same kind of belief in the power of a song, or an album—arrives less than 40 seconds in to “The Brothers Williams Said,” the melancholic, swooning opening track on See You Tomorrow, the most recent release from the long running indie folk trio The Innocence Mission. It happens when what serves as the song’s de facto refrain comes in for the first time, and you hear the haunting, charming, other worldly voice of Karin Peris singing, in a nearly swirling way, “Tomorrow, today. Today, tomorrow. See you tomorrow,” over the top of of the very old sounding piano, plunking out the notes and building the rhythm to the song.

The second of those moments occurs around 90 seconds into the song, when, again, as Peris arrives at the song’s refrain, the rest of the instrumentation to “The Brothers Williams Said” comes tumbling in, including brushed percussion, a rumbling bass line, and the inclusion of an ethereal mellotron.

It is difficult, of course, to articulate what makes these moments, or any hypothetical moment like the ones I am attempting to describe. It has more to do with the feeling you may get when everything comes together, like the additional instrumentation coming in, or the first time something really beautiful makes you stop in your tracks and take notice—like, the moment in the song evokes much more than it maybe realizes its capable of.

If that makes any sense.

The Innocence Mission formed in 1989, and released their debut effort that same year. You wouldn’t know it, based on the way Peris forms her words when she sings—there’s an elusive, playful accent (is it Irish? Is it from somewhere else?) on a bulk of what she sings—but the group, originally a four-piece, formed in Lancaster, Pennsylvania, originally all meeting during a Catholic school production of Godspell.

For a band that has been around for over 30 years, The Innocence Mission, despite their early, minor attempts at breaking through to a mainstream audience, have remained what can easily be called ‘cult favorites.’ There is a very, very good chance you probably haven’t heard of The Innocence Mission, and truthfully, save for some minor recognition when I was glancing through their discography (the cover art to their 2007 effort, We Walked in Song, seemed familiar) I hadn’t heard of them until the release of See You Tomorrow, their 11th proper studio album.

Set across 11 songs, there are two things that, as a whole, were very clear about See You Tomorrow. Objectively, looking at the music—the instrumentation and the arranging—there’s a stark timeless feeling to this record. Like, doesn’t sound like something that should be released the year 2020; it sounds older than that, wiser than that, and that’s the point. But, at the same time, what is to say that this is the kind of record that can’t be released in 2020. Because if not now, when? When could you pinpoint this sound—is it sometime in the 1990s, still, shortly after the band formed, and acts of a similar sound were coming into their own as well?

The second thing, and this is something I noticed even before I gave consideration to the timeless, ageless qualities a bulk of this songwriting has—but the second thing is the overall aesthetic, or feeling that the record, from beginning to end, works to conjure. Subjectively, this is without a doubt, a ‘fall’ record to me—or even a fall into winter record. It has the right balance of hopefulness and somberness to it that you can see soundtracking the days that grow shorter, the leaves turning and falling, the skies eventually greying, and those last flickers of the warm sun giving way to the desolation and chill of what seems endlessly bleak, with only minor reprieves coming in the form of watching snowflakes dance and twirl in the air before they hit the ground.


Prior to the departure of drummer Steve Brown, in 1997, The Innocence Mission were, primarily, a dream pop band, closely resembling The Sundays, and at times 10,000 Maniacs; the band’s self-titled debut, 30 years old as of last year, has, as you could guess, not aged well and is a real product of both a young band trying to figure things out, as well as the aesthetic of the time.

After Brown left the group, the remaining three members turned things inward, and have continued to do so since their 1999 effort, Birds of My Neighborhood, keeping that swooning feeling of the dream pop days of yore, in spirit, but focusing almost 100% on acoustic instrumentation and, at times, quirky folk arranging.

At its core, See You Tomorrow is a beautiful record, almost from beginning to end, and rarely, if ever, does it falter; it’s not perfect, but it works so effortlessly from beginning to end, the cohesive nature and sheer gorgeous sounds on it are something worth marveling at. Truthfully, the only song that seems mildly out of place with the rest of the record is “Mary Margaret in Mid-Air,” mostly because it is the one song sung (and written) by the group’s co-founder and Karen Peris’ husband Don, but also, musically, there is some dissonance, or at least, there is something that doesn’t exactly sit well with he way Peris’ voice rests above the very plainly strummed acoustic guitar chords.

It is, in a sense, the least intricately arranged, and the least dramatic or sweeping in tone, moment on the record.

See You Tomorrow sets the most dramatic tone early on in the record, with an impressive four song run that builds the album’s folk-based, somber aesthetic—and these are possibly the four strongest songs on the record. Opening with the aforementioned “The Brothers Williams Said,” the group moves continues with the slightly less dramatic, but no less sweeping and dreamy “On Your Side,” the hypnotic and grand “Movie,” and the shuffling and swooning “We Don’t Know How to Say Why.”

The Innocence Mission, with these four songs in particular, are obviously evoking something large with the instrumentation and arranging, but there are also fragments found within Peris’ lyrics that are pensive and grab the listener’s attention, like a small section in “The Brothers Williams Said”—“The kindness of you face does not go unrecognized, has not refused to shine in this most difficult time,” or, from the album’s second half, “The Boat”—“What went wrong has never been your fault.”

See You Tomorrow doesn’t so much as suffer from having a ‘fatal flaw,’ and it doesn’t even really ‘suffer’ per se, but it is an album created by a band that is deeply committed to their sound, specifically on this collection of songs. After starting off strong, the album’s originality or sense of wonder isn’t lost, but things begin to sound a little similar, especially as it eases through its second half.

In the end, the thing about See You Tomorrow is that yes, it’s a beautiful, delicate album, and as it concludes somewhat unassumingly with “I Would Be There,” it’s the kind of record that isn’t here to make some kind of big statement—but not every record needs to make a statement, large or small. It doesn’t ask a lot of questions, if any, and doesn’t leave the listener with more questions than answers. It’s an album that, even in its simplicity at times, is used to create moments—or moments are created with it. See You Tomorrow doesn’t overstay its welcome—finishing just after a half hour, but in that time, there is a gentle give and take, where The Innocence Mission opens up their world to you, and in turn, you open up your world, and its moments, to them, and the soundtrack they are able to create.

See You Tomorrow is out now on vinyl and CD, via the band themselves.
Labels: 1990s album review. dream pop folk indie folk new music new review see you tomorrow the innocence mission