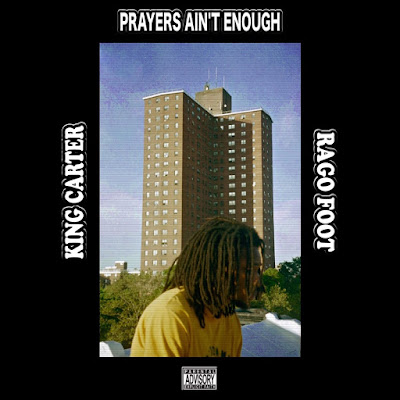 Prayers Ain’t Enough doesn’t so much take him out of his ‘comfort zone,’ per se, but it does take Bamba Fall out of his home in New York City, and place him ‘across the pond,’ in London, working with Rago Foot, a borderline enigmatic producer and rapper with a rising profile thanks to his two full length efforts—one of which, We Need to Talk, coincidentally also arrived around two months ago.

A visceral, dizzying combination that is urgent, claustrophobic, and at times, wildly triumphant and self aggrandizing, Prayers Ain’t Enough can be seen at times as both a meditation on the self, as well as a meditation on the struggles that come with modern spirituality.

Produced almost entirely by Rago, with additional production on five of the album’s 14 tracks by Cleto Marez, Bamba Fall isn’t operating completely without a connection to his homeland; he’s joined by his New York ‘sLUms’ collaborator MIKE (Michael Jordan Bonema) as a guest artist on two songs—and Bonema is also credited as a producer on one track, under his DJ Black Power moniker.

While a bulk of the sLUms collective’s material can be easily called lo-fi—Haram included—Prayers Ain’t Enough, however, places Bama Fall’s voice in what I would stop short of calling an entirely new sound—it can, at times, still be very lo-fi in terms of its aesthetic. Working with Rago Foot, though, broadens the spectrum of the album’s soundscape, making it a more robust atmosphere for Bamba Fall to both thrive in and explore—there’s a greater emphasis on synthesizers, as well as different percussive patterns and sounds that you would, more than likely, normally not here on an album put together entirely in New York by the, as Bamba Fall is so fond of calling it, the ‘sLUmmy gang.’

And while this year’s nearly never ending stream of albums from sLUms members and associates—like MIKE’s Tears of Joy, or A Quiet Farwell from Jasper Marsalis’ project Slauson Malone, or even Maxo’s Lil’ Big Man—continues to introduce listeners (like myself) to more and more new artists and producers to research, the same can be said for Prayers Ain’t Enough; the album features contributions from the East London emcee Nigz TG, as well as multiple appearances from the English expatriate Goya Gumbani, who turns up on three tracks. 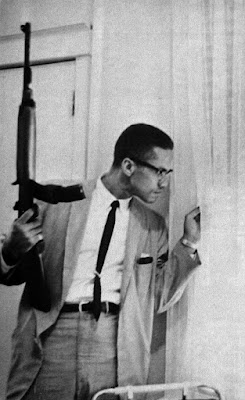 Much like the Haram EP before it, Prayers Ain’t Enough includes an except of dialogue spoken by Malcolm X in its introductory track—while the entire intro from Haram was a portion of an interview with X, Prayers Ain’t Enough’s opening piece, “Triple Double” only concludes with the usage of the opening to Malcolm’s “By Any Means Necessary” speech—Malcolm, himself, and his iconography is also mentioned very quickly in a line on “Triple Double”; in one of the breathlessly, unrelentingly delivered lyrics, Bama Fall utters “Strapped up like I’m Malcolm peepin’ through the blinds.”

Musically, even without total oversight by one producer, there is a very strong cohesive feeling throughout Prayers Ain’t Enough, and there’s enough diversity in each track’s structure so that the album is never at risk of becoming stagnant from start to finish.

The aforementioned “Triple Double” is the most reserved in its sonic execution—the percussion skitters at a frenetic pace, but the chilly synths and other atmospherics are held back slightly, buried in a layer or two underneath the vocals; in contrast, the MIKE feature “Run it Up” is built around heavily manipulated samples, and a swaying, slinking drum sample—it’s the most ‘sLUmmy’ thing on the album in terms of what it owes to the gritty, home-recorded, lo-fi aesthetic that Bama Fall can usually be found within.

Rago continues that juxtaposition until the album concludes—“Wad3,” for example, is damn near jubilant in the horn samples it interpolates, while just two songs later, on “Can’t Touch This,” the production shifts back to an array of deep synthesizers and sharp sounding MPC generated percussion—and a saxophone ringing out too, on top of it all.

One of the fascinating elements of Prayers Ain’t Enough, outside of its ever-innovative production, is the contrast between Bamba Fall’s delivery—calling it unrelenting, or breathless, or energetic doesn’t do it justice—and the level with which his guest artists bring. MIKE, of course, is known for a very specific kind of delivery—his voice is deep, and at times, he seems like he’s working at his own, slightly slower pace, but he, too, can be ceaseless.

The other featured artists on Prayers Ain’t Enough provide a balance to Bamba Fall’s emphatic, untiring delivery—Nigz TG provides a little self-aware playfulness to “Wad3,” while Goya Gumbani slows things down on the tracks he appears on, pointedly making his mark with his thoughtful words, drawing you into both his story, and the storytelling element that has always been at the heart of rap music.

With his own delivery, and his own storytelling, Bamba Fall has a ‘blink and you miss it’ sense of urgency and immediacy with his lyrics—it’s something I noted while listening to Haram—that, if you aren’t paying incredibly close attention, you’ll miss something, or, you’ll do a double take when a lyric that other artists may lean onto as a punch line, he opts to use it as a throw away—unable to stop before moving onto the next, already fully formed thought.

Lyrically, Prayers Ain’t Enough, is a constant give and take of subjects—it can be incredibly stark, with tales of peddling drugs in order to make ends meet; but it also is an album full of triumph, exuberance, and confidence. And with that being said, even though it is capable of being a ‘fun’ and exciting album, there is a dark shadow looming over a bulk of it, and with that being said, it’s an album that, once you unpack the layers, does ask a lot of questions—about the self, about one’s family and close friends, and about spirituality—but in the end, as the gloomy and skittering “Peace” finishes up, Prayers provides no easy answers.

In what continues to be a banner year for underground rap music, Prayers Ain’t Enough is a stark and thoughtful statement that, thanks to the charisma of the rapper they call King Carter Slums and to the colorful sonic palate of Rago Foot, always remains accessible, even at its most experimental or bleakest moments. The duo both diversifies each other’s respective sound, while staying as true as they can to their lo-fi, underground, and fiercely independent aesthetics.