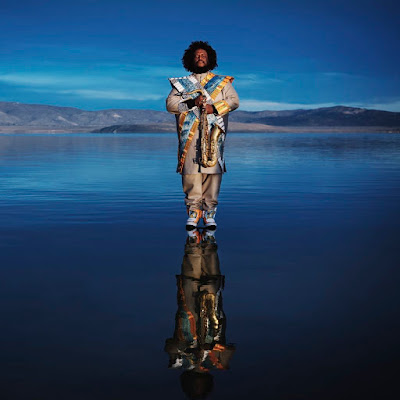 If you’re jazz music auteur Kamasi Washington, you properly follow it up with an even more ambitious double album—spreading it across four pieces of vinyl, plus an additional fifth record—a five song EP—hidden in the center of the packaging.

Arriving three years after his ostentatious introduction, The Epic, a sprawling triple album with running time of over three hours, and hot on the heels of the stunning EP he released last year, Harmony of Difference, saxophonist, composer, and bandleader Washington has returned with Heaven and Earth—a dense collection of 16 songs, that finds him growing more comfortable and confident in his roles, leading an incredibly tight and capable stable of musicians, and exploring the spaces where jazz, funk, R&B, spirituality, and pop music all collide.

If you can say, like, one or two things about Kamasi Washington, in general, as well as his canon thus far—it’s that he is fearless, and he is bold. Heaven and Earth is no different—it’s his boldest statement to date, and as a composer and bandleader, he seems to be operating with a kind of self-assurance that is seemingly rare in today’s contemporary popular music landscape. Heaven and Earth, when taken as a whole (all 2+ hours of it), brings you to incredible and exciting highs, as well as moments of pensive introspection. The shortest piece on the record is shy is six minutes; the longest is almost 13—but even with these lengthy running times, there is a real, tangible urgency in almost every song. This music needed to be written, played, and recorded—and more importantly, it needs to be heard.

While The Epic was conceived one way, then shuffled appropriately so it could fit onto three very tightly pressed vinyl LPs, Heaven and Earth’s intended structure remains intact between both the CD and LP versions—the vinyl records are pressed in such a way that each side contains two pieces. Yes, it does mean you have to get off your ass more often to flip a side over, or get the next record out, but it’s worth it, and that’s part of the process with Heaven and Earth. It is, without a doubt, the kind of listening experience that you can become lost in very, very easily, but it’s also a record that is energetic enough that it cannot, nor shouldn’t, be relegated to just background music.

It’s meant to be interactive—you are supposed to feel this record.

With as ambitious and intimidating as Heaven and Earth can be, rarely does it steer itself into a place of inaccessibility, which is surprising given how dense and frenetic it is, as well as how lengthy a number of the tracks are. In fact, Washington and his band open with one of the album’s more infectious songs—the stuttering, bombastic groove of “Fists of Fury,” which also happens to be the first single from the record. However, it isn’t all hook-driven, grandiose, and pop-leaning—though they are a number of moments that are like that. I don’t want to say a song like “Fists of Fury” is a bad song, because there really aren’t bad pieces on Heaven and Earth—there are songs that are more successfully executed than others, and I will say that the bombastic blasts that open “Fists of Fury” is a hell of a way to begin your album and grab the listener’s attention, however, that doesn’t mean it’s one of the more emotionally evocative and resonant songs.

Washington has structured the set so that the atmosphere is evenly split throughout—meaning that there isn’t just one album that focuses more on the pensive, introspective pieces, and one that is full of the more jaunty and rollicking songs. The Earth LP does open with three of the more up-beat and feverishly rhythmic pieces before settling down into a little smoother territory on the reserved jazz and skittering funk of “Connections.”

The thing about Kamasi Washington that people can find so polarizing is that he, as a bandleader, arranger, and performer, is pushing ‘jazz’ forward as a genre—both forward within its own context, as well as forward into the world at large. He’s making jazz approachable again, simply because he was involved with a Kendrick Lamar record, and now people who probably don’t know a ton about jazz or ever listened to it, are interested.

While there are moments that push the idea of ‘jazz music’ as you and I probably understand it—the blending of funk and R&B into many of these songs (the head-nodding, scuzzed out “Street Fighter Mas,” or the extra thick sounding percussion of “The Psalmist”), there are moments that are more traditionally based too, like the smoother, slinkier vibe of “Tiffakonkae,” and the use of motifs and themes—you can hear musical ideas that he and the band regularly return to, even with all the explosive soloing and sidetracks, like the main musical statement in “The Invincible Youth.”

The absolute high point of the record as a whole, and probably one of the most impressive and cathartic pieces Washington has put together thus far, arrives at the start of Heaven—the sweeping and theatrical “The Space Travelers Lullaby.”

Much like the best moments of his previous works—like last year’s “Truth” or his cover of “Clair de Lune” from The Epic, “The Space Travelers Lullaby” is where Washington pulls out all the stops—an absolutely gorgeous string arrangement accompanies the wordless singing of a massive choir of voices, as they are lead through regular shifts in the song’s pacing and rhythm, creating a kaleidoscopic effect that is unrelenting until the song’s final two minutes, where the instrumentation disappears, the choir dissipates, and all you’re left with, is Washington’s saxophone, mournful and alone, playing out against a slight reverb that eventually grows into a cavernous echo, creating a musical moment that gives you chills, and makes for something completely unforgettable, all before a surprising and short reprise.

I stop short of saying that as a composer or arranger or whatever you want to call it, that Kamasi Washington has settled into his niche, or that he doesn’t stray too far from a specific sound and affect—but Heaven and Earth, in truth, does not stray too far from that iconic ‘Kamasi Washington sound’—he brings in the strong lead vocalists, the lush string accompaniment, and the vast sounding choir to add wordless singing—all things he introduced on The Epic and then shrunk down in scale to fit onto Harmony of Difference—they make regular appearances throughout.

Offered outside of Heaven and Earth, as a stand alone EP housed within the center of the album’s impressive packaging, is The Choice—an additional five-song collection including three original compositions and two covers. For the first week after the album's release, The Choice was a bit of a secret; it was not featured in the version of the album available to download from iTunes, however, the EP is now available as a stand alone option.

I stop short of saying that I can see why the tracks included on The Choice were not factored into the album proper—however, it is truly a hit and miss addition—the EP’s opening track, “The Secret of Jinsinson,” is the closest in tone and structure to the material found on the album. And of the three Washington-penned original pieces, “My Family” is the most interesting—and it’s a bit of a surprising turn, because after all that brainy bombast from the Heaven and Earth proper, “My Family” sounds about as traditional as you can get, calling to mind the slow and reflective jazz music from many, many years ago; while “Agents of Multiverse” finds Washington and his band working with some minor dissonance, and a shuffling, prevalent groove.

The covers leaves much to be desired—Washington’s interpretation of “Will You Love Me Tomorrow?” burns slowly and sprawls the song across nearly ten minutes, bringing the vocals in after the two minute mark, and soulful vocalist Patrice Quinn dramatizes every lyric. The other cover featured here, “Ooh Child” (as in “Ooh child, things are gonna get easier)” doesn’t really do anything to improve on the original, or myriad other covers of it in the world—making it a bit of a miscast in this set.

A double album running well over two hours can be a little overwhelming—both in sheer content alone, as well as musically speaking. I think it goes without saying that Heaven and Earth is a lot to take in, and while it maintains its accessibility throughout, it is a lot to ask of a listener that they take this journey. From the startling opening notes of “Fists of Fury,” to the absolutely cacophonic highs of the closing double shot found in “Show Us The Way” and “Will You Sing?,” Heaven and Earth is a record that never lets go of you—grabbing you by the lapels from the moment it starts, you ride along for the gorgeous highs and lows, finding yourself shuffling along to a groove, or letting a moment of transcendental beauty wash over you.

1- I feel like I should clarify that there is some minor confusion on what is considered Kamasi Washington’s proper debut album. According to his Wikipedia, as well as his Discogs page, he self-released three albums in the mid-2000s—all of which are now out of print and seemingly impossible to find. You could go so far as to say that The Epic is his proper reintroduction as an artist.

Heaven and Earth is out now via Young Turks.