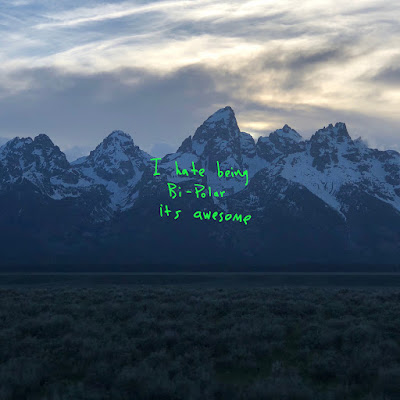 Almost exactly five years ago, in all his wisdom, Kanye West uttered the lyrics, “As soon as they like you, make ‘em unlike you,” on the audaciously titled “I Am A God,” from his sixth album, Yeezus.

Now, like right now, at this very point in time, isn’t exactly the best time to be a Kanye West fan—and in truth, it hasn’t been a good time to be a Kanye West fan for a while; maybe beginning with the on-stage meltdowns toward the end of 2016, where he confessed that, among other things, if he had opted to vote in the presidential election, he would have voted for Donald Trump.

Even prior to that West has always, from nearly the beginning of his career as a rapper, been a mercurial and polarizing personality—at times, difficult to defend, but during his 2003 to 2010 run, you could just point at the music and, hopefully, focus on that instead.

Despite the few flickers of excellent that can be found in his last full length release, The Life of Pablo, I do not hesitate to say that West’s output as of late has been one of diminishing returns; and unfortunately, his latest effort, a seven-track effort simply titled ye, does not do him any favors.

ye is the second in a series of five albums that West is ‘hand producing,’ and, much to everybody’s surprise, it arrived on schedule; the release dates for these five albums were shared on Twitter a number of weeks ago, and given the botched and confusing roll out for The Life of Pablo, and how West was still tinkering with it even after it was ‘officially’ released—I am sure I wasn’t the only one who was uncertain that he’d be able to pull it off—but between this arriving on schedule, as well as Pusha-T’s proper sophomore album, Daytona, it seems like one could make the claim that this summer is truly ‘Yeezy Season.’

But meeting self-imposed deadlines is one thing; making an interesting, thought-provoking, and marginally focused album for yourself is another, and ye, despite its brevity, comes across as, among other things, terribly unfocused and unfortunately rushed—partially in an effort to meet the June 1st release date.

Recorded in Jackson Hole, Wyoming (of all places)—the same location where West opted to have the listening party on the eve of the album’s release—ye is West’s most ‘of the times’ record; it is 2018, and throughout the album’s seven songs, it serves as a mirror and a window: a mirror held up to West himself, and a window to the way he views the immediate world around him. And despite the fact that this is a very ‘of the times’ record, it is strangely missing the volatile urgency that was found in Pusha-T’s Daytona.

However, I suppose comparing Pusha-T’s dark, cocaine dealing raps with West’s scattered self-indulgence is like comparing an apple to a fruit that nobody has ever heard of before.

ye begins on its darkest, and strangest note—the cumbersomely and unsettlingly titled “I Thought About Killing You.” It’s the longest song on the album, split up into, I guess, what you could all ‘movements,’ for lack of a better term. It begins with a slow moving, self-aware spoken word portion—“Today I seriously thought about killing you; I contemplated—premeditated murder. And I think about killing myself, and I love myself more than I love you, so…” With his voice sliding around to various pitch shifts, it’s this series of thoughts he circles back around to a number of times in this portion of the song, before it segues into the second section, where West slowly works his way into actual rapping, with the song changing course completely with little less than 90 seconds left.

The annotation on Genius claims that the ‘you’ West is thinking about killing is his ‘shadow self’—or a darker part of himself; something that is referenced throughout the record, as well as alluded to in the album’s cover art. However it is intended, “I Thought About Killing You” is a stark way to open the record—simmering slowly, but unlike other slow simmering opening tracks that West has put together in the past, this one never really goes anywhere.

“I Thought About Killing You” ends somewhat abruptly, on a joke, and the next track, the aptly titled “Yikes” begins—the song’s refrain seems strangely familiar, at least structurally, to the refrain/melody of “Wolves,” one of the more memorable and interesting tracks from Pablo. “Yikes” continues West’s exploration of his ‘shadow self,’ or at least his probable bi-polar diagnosis—which he seemingly makes light of in the song’s final moments. Musically, it’s catchy, sure, but West’s lyrics are, let’s face it, not great here, or as clever as he’s capable of being—and truthfully, you don’t see very much of that side of him, if at all, on this record.

At this point, it seems worth mentioning that, for the next five songs, ye doesn’t get any better, and that, at the end of the day, this is not a very good album. You can search for redeeming qualities to it, or interesting moments—and sure, there are a few here and there, but overall, this is a pretty glaring misstep in his career.

“Its been a shaky-ass year,” West raps in the album’s second half, on “No Mistakes.” And yes, it has been a shaky-ass year for West as a public individual—not even a year, so much, or half a year—just a rough couple of months with him becoming, more or less, an amalgamation of an ‘album cycle’ and a walking tabloid headline generator. It would be one thing if ye was a return to form for West, or even, like, a good and enjoyable album—but it isn’t; it, much like the worst moments of The Life of Pablo, is more or less, forgettable, and will more than likely be remembered for the way it was released (a listening party in Wyoming) rather than the content found within. It’s a confusing, self-aware and self-aggrandizing mess of an album, like someone just threw a pile full of half-thought out ideas down on a table and walked away.

Take one of the album’s final songs, “Ghost Town,” for example—yes it bucks the typical song structure in that it feels like there are no verses or refrains (maybe there are, I don’t really know) but it also winds up being a song that jumps from one guest appearance to the next, and in the end, spirals into an extended outro with vocals from 070 Shake.

That’s not saying West doesn’t try—it’s a slick sounding album, but it becomes clear he opted to use the more interesting or innovative production techniques for others, and the beats he wound up keeping for himself aren’t anything special. And there are heartfelt moments too, where West tries to tug at your heart—“Wouldn’t Leave” takes a look at the marital problems some of his more questionable sound bytes has caused, and the album’s closing track, “Violent Crimes,” is an ode to his first born daughter, North, and the struggles that come from watching your child grow up before your eyes.

While Daytona was oozing with an urgency, ye lacks that, and instead, it is seemingly an album made out of frustration and desperation; a frustration with himself and a desperation for everybody to love him. It also was, truthfully, made in a hurry—in an interview on the eve of the album’s release, West confessed that following his lengthy day of bizarre comments (e.g.—slavery was a choice), he scrapped the entire record and started over. That was roughly a month ago, meaning this new version of ye was assembled in roughly four week’s time.

Who is to say what was thrown out was any better; could it have been even worse than what we got?

Kanye West is in a position now where every choice he makes—musically, or personally—can, and will, damage his legacy. There is nothing found on this album that I could ever call life affirming. That, coupled with his unhinged personal behavior, makes this a difficult pill to swallow.

There are, and probably will always be, Kanye West supporters who think everything he does is brilliant; there are people who will think this album is amazing. I would encourage anyone who has ever listened to a Kanye West record to listen to ye and try to find the value in it—and if you can, that’s great. But in the end, for me, this is the sound of a once great artist who has lost his way, uncertain how to find his way back, and is possibly on the verge of falling apart completely.