Album Review: Failure - Your Body Will Be (EP 2) 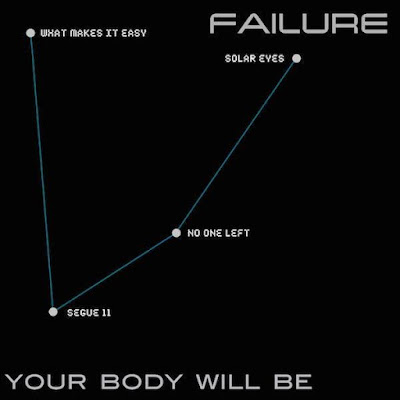 Arriving around a month after In The Future, the first in a series of four EPs featuring newly recorded material, Failure have returned a little sooner than I had anticipated with the second installment—Your Body Will Be, another collection of three songs along with an instrumental segue track.

While I was, and still am, confused by the botched roll out of all this new material—Your Body Will Be is, thankfully, a step in the right direction for the band, following the missteps that were included on In The Future.

One of the reasons that the material featured here is exponentially more enjoyable and interesting is because it taps into a darker, slightly edgier place for the band—yes, a song like “No One Left” is structured around a huge, bombastic, relatively catchy refrain, but it also basis its verses around an underlying tension between shared vocals from both Greg Edwards and Ken Andrews. Andrews has always been the defacto frontman for the group, handling a bulk of the lead vocals and music writing, while, at least during the band’s original run in the 1990s, it was Edwards who handled the lyrics, with the two trading off between who plays the bass and who plays the guitar.

A song like “No One Left” also pushes Failure into slightly darker territory—or at least darker than they were willing to explore on In The Future, with the lyrics, at times, on par with those of Edwards’ other band, Autolux—“Just like Jesus, the loser with the heart of gold.”

From there, Failure continues the frenetic, pulsing energy, with the driving, slinking “Solar Eyes,” which is powered by a scuzzy, fuzzed out bass chug, distended guitar theatrics, and the unhinged percussive pummeling of Failure’s drummer, Kellii Scott. And yes, while “Solar Eyes,” much like “No One Left,” are ‘modern rock songs,’ meaning they are built around huge refrains, there’s something ramshackle enough about the song that is eerily reminiscent of moments from the band’s sophomore album, Magnified.

Similar to how In The Future was sequenced—with two ‘heavier’ tracks, something featuring an acoustic guitar, and then an instrumental piece to close it out—Your Body Will Be switches gears as it passes the halfway point, with the acoustic, dreamy “What Makes it Easy”—a song that, while a little easier on the ears than the others, still has some menace to it—a lyric at one point is, “If you’re a monster now, you’ll be one later too.” It, much like moments of “No One Left,” also has small echoes of Autolux—specifically in the rolling percussion during the verses as well as in moments of the melody.

I’m still baffled by the release strategy for this new material—do the three (or is it four?) digital EPs create one full length, to be made available on CD and LP later this year? Or are the EPs separate, and there will be even more music coming in the form of a full-length release?

As baffling as this all is to me, Your Body Will Be shows that it just took a little bit for Failure to find their ground with this new music, and that hopefully, the subsequent EPs will follow suit. It packs the exhilarating punch of the material from Fantastic Planet, but it remains true to the direction the band headed in since it reformed in 2014.

Your Body Will Be is available now as a digital download from the band's merchandise store, from their Pledge Music page, or iTunes.
Labels: album review failure greg edwards in the future kellii scott ken andrews new music new review space rock. your body will be