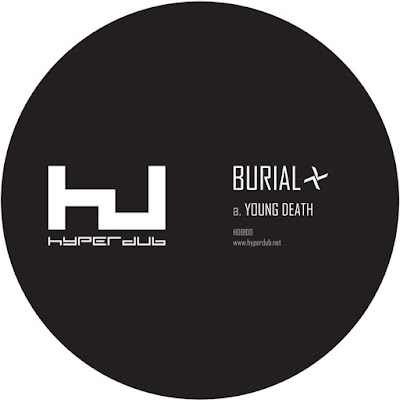 If there’s one thing that I absolutely love, it’s watching a botched roll out of an album, or in this case, a single, unfold across the internet over a span of time—and 2016 has had no shortage of attempts at a surprise release, or an extravagant release, that haven’t exactly gone as planned.

Early on Saturday morning, word started to spread that a record store in Toronto had accidentally sold a handful of copies of a new 12” single from the enigmatic producer, Burial—who, if you were keeping track, hasn’t released any proper music in three years.

Some news outlets were stating that the release had been intended as a surprise on November 30th; the internet cesspool Reddit claimed it was to arrive on December 2nd. Rips of the vinyl (played at the wrong speed) turned up on YouTube, only to be digitally shifted up to 45 rpms, and posted to Soundcloud.

There were disbelievers who claimed these tracks were all fake.

Burial’s label, Hyperdub, remained quiet on the whole situation until Monday morning, when the single was officially released (digitally speaking) via their Bandcamp page.

Prior to actually sitting down and listening to “Young Death,” and it’s accompanying b-side, “Nightmarket,” I didn’t re-listen to Burial’s last release, the Rival Dealer EP, but I did skim back through the hyperbole filled review I had posted in December 2013, written in a coffee shop on a snowy December morning.

Upon initial listens, “Young Death” could be looked at as the start of a new, or different, era for Burial—which, if sorting his canon out by his full lengths, and the EPs released between 2011 and 2013, this would begin the third phase of his career. Abandoning the beat-driven structure of his earliest work, structurally, “Young Death,” and, to some extent, “Nightmarket,” finds Burial continuing his multi-part compositions, but here, they appear in a truncated form, with the material here having far shorter running times and fewer movements when compared to the songs from Rival Dealer or Kindred.

“Young Death” begins like any Burial song—static, that familiar click-clacking sound in the distance, and a pitch-shifted, disembodied vocal sample, before the first movement of the piece settles into a restrained, almost non-existed rhythm, doing its best to quietly back a low, somber synthesizer progression, which occasionally bubbles up into something slightly more hopeful, though the vocal samples that float around throughout do their best to keep things mournful.

I will always be there for you…

“Young Death” switches gears at around the four-minute mark, with the moments between each section noted with a long pause of static and the sound of rain falling. The second portion shifts the song in a different direction, but lasts only roughly a minute, making it a bit of a postlude or coda to the song’s main motif.

The beat shifts to something more groove oriented, as do the synthesizers. And the vocal samples take more precedence in this section, and at times, they seem like they may either be a response to the voices from the earlier portion of the song, or at least a reassurance of the same message.

Slightly less successful in its structure and execution is the effort’s b-side, “Nightmarket.” Spanning seven minutes, Burial spends the first three of them playing with two specific synthesizer patterns, one of them sounding rather ominous, the other rather contemplative and comforting, blending them into the background of the layer of white noise.

The second half of explores similar synthesizer sounds and tones, but switches up the patterns that they arrive in—ascending and descending throughout the white noise and dissonance, which continues to grow throughout as the track continues.

The final two-minutes of the song turns into yet another direction—and for quite a while, it is even more oppressive and all consuming than the other two.

Like so many of Burial’s tracks, “Nightmarket” ends rather abruptly, and without any kind of resolution. I stop short of saying that the song itself is a misfire, but when compared to material released over the course of the last five years, there are better, more interesting, and more thought provoking pieces on other efforts.

When I wrote about the Rival Dealer EP, I referred to its closing piece, “Come Down to Us,” as life affirming, an assessment that I firmly stand by. Rival Dealer was a high-water mark for Burial as a producer—and I would go so far as to say he maybe peaked with those three songs. Something magical happens throughout that half-hour you spend listening to it, and no matter how long you toil over your collection of samples and no matter how many layers of white noise and static you toss in, it’s going to be hard to beat it as an accomplishment.

“Young Death,” in that respect, is not so much a disappointment, but it fails to reach the heights Burial is capable of ascending. I guess we should be thankful at all, though, right? Burial doesn’t owe us anything. He didn’t have to return with any new music at all. Rival Dealer could have been it. But it wasn’t. So we should be glad.  And I am. Just recently, I was pondering this time of year, and thinking to myself, “Man, it’s been three year since Burial released anything in December. Maybe he’ll surprise us all and try to redeem what is left of 2016.”

Despite what could be called a slight lack of focus musically speaking on both pieces, the message he may, or may not, be trying to get across is that he—the man born William Bevan, is here. I will always be there for you, the sample on “Young Death” croons; and I like to think that this is Burial’s way of reminding us that while he has done an outstanding job of remaining in the shadows for nearly his entire career, he is here for us.

He will give us what we need. It may not be what we want.