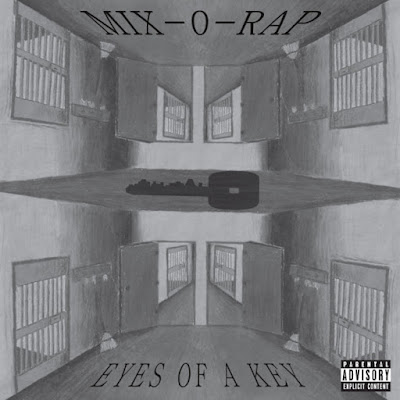 Every once in a while, an album that is so strange and so fascinating comes along—it may not even be that quote unquote good, but there is something so fucking compelling about it that you can’t help but be drawn in.

Cody Chesnutt’s sprawling, lo-fi debut, The Headphone Masterpiece, is a prime example of this—released in 2002, I bought it at the beginning of 2003 based on the hype surrounding it alone. At the time, I didn’t get it, but I knew there was something beguiling about it; it took me nearly a decade to ease back into it and appreciate the ramshackle whimsy and charm that it exudes.

I’m not even sure how to describe Eyes of A Key, the debut full-length effort from rapper and producer Mix-O-Rap. This is, by far, one of the strangest, yet captivating albums I have heard in a very, very long time.

Recorded while Mix-O was incarcerated, the product description that accompanies it goes into pretty specific detail about the process used with the record, so it’s best just to quote it here, in full—

I wrote this album in prison. I went to the music room every week to play on their keyboards. I studied different styles of beat patterns and sound recording to be a recording engineer. I wanted to create this new sound, so I took go-go, hip-hop, house, and drum and bass to blend up a new pattern of beats with a DJ sway. So I rapped on it. I need a perfect mix sound so I used a reverb gate, small room because I was in a small room. I used my mom’s blankets to trap the sound waves in the room. I use a digital mic from Radio Shack and was rapping with a blanket over my head to trap the sound waves. I played my keys in F flat to deepen the tone. I put tom toms on it to fill the spaces with handclaps to have that snap. Then I put a reverb gate on every instrument to get the lo-fi audio sound. I mastered it with all knobs on zero. Equalizer on zero. I mastered my own sound by tweaking and listening with cheap headphones.

If you can wrap your brain around any of that—good, but that kind of description still does not prepare you for just what you’re going to be listening to throughout the course of Eyes of A Key.

The compelling backstory, as well as the rudimentary charm of Eyes of A Key are what sells it—each of the twelve tracks on the record is incredibly repetitive, both musically and lyrically, but at no point does it ever become problematic or irritating; quite the contrary, actually. Eyes of A Key is one of the more hypnotic, inviting records I’ve listened to in a very long time.

Throughout the record, Mix-O tries to bury the seriousness of ‘this was recorded while I was doing a bid’ by keeping the exuberance high—the album rarely, if ever, slows down, with each track’s tempo pulsing and jittering along quickly. Mix-O himself, as a rapper, also never ceases with the energy level—there is an urgency with which he delivers each line, many of which are just repeated phrases, yes, sure, but he is unrelenting in the way he shouts these expressions.


Due to the nature of Eyes of A Key, it’s certainly not a record that’s for every listener, and as welcoming and fascinating as I find it, someone else may find it to be incredibly inaccessible. The aesthetic is beyond lo-fi—every song is packed with crunchy and overblown chintzy keyboard beats, and all of Mix-O’s vocals are distorted to the point where they are almost unintelligible.

Because of this, it becomes an album for a strange cross section of listeners: those who appreciate oddball rap music, and those who have an affinity for interesting production values.

Whether you think it’s good or not—that’s beside the point; in the end, it’s a really fun, insanely raw record that is meant to be ingested as a whole from start to finish; while wearing its amazing backstory on its sleeve, it is also one of the most interesting albums of 2018.