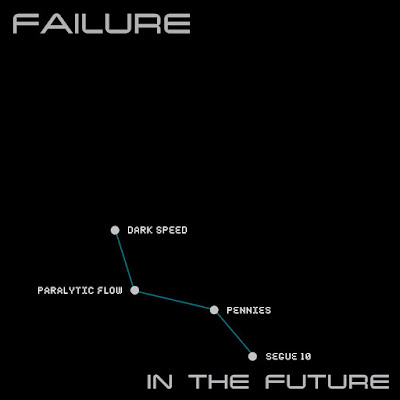 My concern and disappointment for crowd sourced and funded record releases was pretty well documented the last time I wrote about the group Failure, so there is no need to get into it again—however, I will say that there is still, and may always well be, a problematic disconnect between the musicians asking for your money in advance, and the fans willingly plunking it down.

Failure had, as of late, been teasing time in the studio by sharing photographs via social media, and as it turns out, they had quite an elaborate (and maddening) roll out for their yet to be completed and released fifth full-length effort.

Available both via the band’s own merchandise store, as well as a newly launched Pledge Music site, Failure are in the midst of releasing four (or is it three?) new EPs of material throughout the course of 2018—this will then, apparently, culminate in the release of the new full-length.

Now, here’s where it gets kind of confusing. From the PledgeMusic site, you can sign up to receive the digital EPs, but you can also pledge to receive the new album on CD or vinyl. You can do something similar via the Failure merch store—various combos of digital EP bundles are available, as well as pre-order options for the full-length when it’s done and ready to be released.

Some material regarding this claims there are three EPs; but there are apparently four? There is also the question of it you are getting a yet to be determined number of extended plays, PLUS a full-length of new and unrelated music, or, if the EPs are all available digitally, and the physical format for them is a full length CD and LP.

I’m not really sure what I signed up for, truthfully. Before I even knew that their Pledge Music site had been launched, I blindly pre-ordered the digital four EP bundle, with the first slated for release on Saturday, March 31st—a strange day to release music, since most new releases come out on Fridays.

As it turns out, this was some kind of mistake, and the EP was given wide release on March 30th, in places like iTunes, etc—and I was stuck waiting another day for the email to access my digital download.

These are first world problems, yes—yes I know. But they are my problems, never the less; the problems of when a band I’ve loved since I was 14 years old reunited and started putting out new music, releasing it independently, trying their hardest, but still coming up short on a successful connection between themselves and their rabid fan base.

At this point, four years into their reunion, I hate to say that new music from Failure provides diminishing returns, but on the first of these new EPs, In The Future, with three songs and one instrumental segue track, it finds the trio operating more unevenly than their 2015 effort, The Heart is A Monster.

I know that Failure can never make another record like their magnum opus, 1996’s Fantastic Planet. They can never get back to that time—mostly because no one in the band is addicted to heroin at this point, but also it is a true snapshot of a group operating with little concern for what others—listeners, their record company, etc—thought of them. Recorded in a house owned by Lita Ford, it’s unhinged and visceral, marked by give and take of Ken Andrews and Greg Edwards, as wells as production and mixing techniques that Andrews explored and subsequently grew out of as he learned more about the craft.

Of the three full songs on In The Future, two of which are brand new, one of which is a reinterpretation of a demo/rarity from Golden, a collection of non-album material released in 2004. That song, “Pennies,” is by far the most successful and enjoyable of this EP. It breathes new, unthought-of life into a really rough song recorded in the early 1990s, reviving it using lush arranging and atmospherics.

The lyrics are still unsettling—about how pennies thrown from the top of a skyscraper can kill, and about the protagonist of the song lines up their own change along a windowsill, watching the busy street below. De-facto frontman Ken Andrews’ voice has certainly aged since the original demo of “Pennies” was committed to tape—it has a little bit more of a rough edge to it now in comparison, but he still is able to, more or less, hit the right range—I mean, there was always a little bit of an uncomfortable dissonance built into the vocals of this song, and that is still very much present.

Musically, it’s still structured around an acoustic guitar, but now in this revision, it’s backed by real percussion from the band’s very able drummer, Kellii Scott, who keeps time much better than the chintzy sounding drum machine from the demo; it also boasts additional electric guitar, cavernous piano chords, and an eerie chime plunk that punctuates each verse.

However, the other new songs included on In The Future are not nearly as successful, or even listenable.

The EP opens with a dramatic change of pace for Failure—the slithering “Dark Speed,” a song that, truthfully, until you hear Andrews’ voice, sounds like latter day Nine Inch Nails; I also noticed some comparisons being made online to Greg Edwards’ post-Failure project, Autolux—which I can understand.

There are a number of issues with a song like “Dark Speed”—the first of which is that, for exactly three minutes, you’re listening to a song that never takes you anyway. Failure have built a career out of songs that start unassumingly and build to a magnificent cacophony that overwhelms by the end. “Dark Speed,” however, remains stagnant—there are places is where it could ignite and explode, but the band opts to remain incredibly reserved throughout, especially Scott, who provides a crisp sounding rhythm, but it rarely changes, and there’s no chance of him really getting to showcase the kind of power behind the kit he actually has.

The other, and much larger, problem with “Dark Speed” is that Andrews delivers nearly every word in a weird, low, speak-sing tone; it’s not rapping, but it’s not singing—whatever it is, it doesn’t serve the band at all.

“Paralytic Flow” is the other new song included on In The Future—it’s neither amazing, nor is it unlistenable. Structurally, it seems like it is cut from the same cloth as a bulk of the material from The Heart is A Monster. The band’s trademark, searing, spacey guitar riffs are front and center, as is Scott’s pummeling of the drums, best heard during the song’s cringey refrain, where a pleading Andrews belts out, “And I want you so bad, I forget myself.” “Paralytic Flow” combines Failure’s penchant for space-related lyrical imagery with alienated ambiguity—it’s a ‘big’ sounding song, and moderately hook driven, but something about it just isn’t working.

In The Future concludes with an instrumental—“Segue 10” is now the tenth in the ongoing series of instrumental breaks in Failure’s recorded canon. The first three can be found on Fantastic Planet, and the remaining six were included on Heart. “Segue 10” slides in seamlessly after “Pennies,” presumably making way for whatever arrives at the beginning of the second in this series of extended plays. It’s piano-based, with little reversed flourishes peppering throughout, along side additional spooky sounding atmospherics. As the closing track on this effort, it’s a bit anticlimactic, but it is, more than likely, the sound of what will be coming sometime in the future.

I would say that Failure has gotten off to a bit of a rough start with the launch of this forthcoming fifth album. There is a bit of excitement and mystery around this project as far as not knowing what is actually coming next, or when it is going to be released, but in this internet age of instant gratification, it’s a little maddening not fully understanding what I’ve signed up for, and when I can expect it.

For longtime fans of the band who are just happy that the Failure reunion extended beyond a ‘nothing but the hits’ tour and one mostly well received additional LP, the first taste of new music from the group on In The Future should delight; for longtime fans who maybe just want them to make a Fantastic Planet II—maybe now is the time to get over that and accept what Andrews, Scott, and Edwards are doing in 2018.