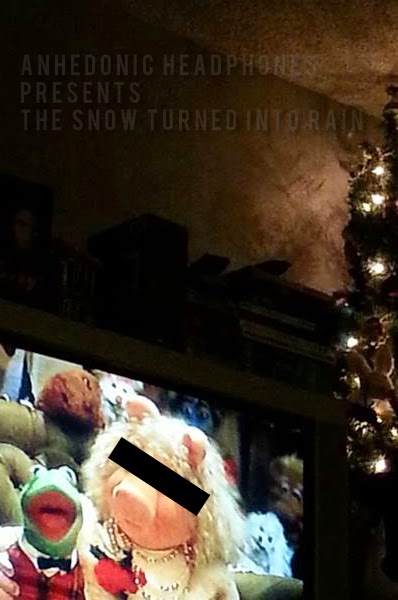 For about the last five years, I’ve had a strange love/hate relationship with Christmas music.

When my wife and I bought our house in 2009, we moved in the week before Thanksgiving. The house itself was in “livable” shape, but we needed to do a lot of work right away—painting, mostly, but also lining the shelves in the kitchen, scraping off wall paper, patching holes, etc. Most nights, after coming home from work and figuring out what to do for dinner (we ate a lot of frozen pizzas back then, or really sad, French fry dinners due to the house), we’d work until very late on some aspect of getting the place set up.

Hooking up the CD player was one of the last things we did, so for those first couple of weeks, all we had was an old CD boombox and out of convenience, we decided to listen to Christmas music on the “all Christmas station” KOOL 108.

This was the year we started to overanalyze the lyrics to holiday songs; the year we started to make a lot of jokes about them; the year that we realized that stations like KOOL 108 don’t have a huge variety of songs—they just play the same song performed by four or five different artists, over and over again, rarely adding anything new into the rotation.

So it became kind of a tradition to listen to it in the car in the years that followed, despite the fact that I’d rather not.

With it nearly being Christmas, radio stations have been playing holiday music for maybe two weeks now; Christmas stuff has been in retail establishments since September, probably. And now seemed like a good time to cobble together a holiday mixtape for your listening enjoyment.

Despite the cloying and awful holiday songs you may be familiar with, there are good Christmas songs out there. And as I’ve learned from KOOL 108, there are some more non-traditional songs that get played on the radio during this time of year.

Some of these are a little silly—like “Christmas Rappin’” or the Death Row Records holiday song. But some of these are songs I grew up with as a kid—“Christmas in Hollis” got a lot of play in my house when my mom bought those A Very Special Christmas CDs. Some of these you’ll hear on the radio—like WHAM! or the James Taylor version of “Have Yourself a Merry Little Christmas,” and it is worth noting that Taylor is one of the few popular musicians that retains the original lyrics to the song. But many of these I would consider non-traditional. Some of these aren’t even “Christmas” songs per se, but get played on KOOL 108 during this time of year, never the less.

Like the holiday season itself, this mix is a straight up rollercoaster. There are moments of joy and fun, but I wanted it to end on a horribly somber note. It may come as a surprise, but I really don’t like the holidays. They tend to bring out the worst in everybody, and there’s no pleasing everyone. I was asked recently by the church my wife’s family belongs to to write this thing for their advent devotional. It doesn’t really get into why I loathe the holidays, but it gets into the pointlessness of all the hustle and bustle, in a tasteful way, I guess, since it was for a church thing—

One of the most vivid Christmas memories I have is probably from when I was seven years old. Like any kid, I could barely sleep at all Christmas Eve, and I couldn’t wait for the following morning so I could tear into all of the presents. Growing up, we’d leave the Christmas lights turned on the tree during the night on Christmas Eve. I remember sneaking into the living room very early in the morning, and just basking in the glow of the tree—both careful trying not to make any noise, but also secretly trying to make enough noise to wake up my parents, with the hope that they’d let me open my presents at two or three in the morning.

But it didn’t work. My father eventually wandered out into the living room and ushered me back to bed for a few more hours.

We spend a lot of time waiting during the holidays, don’t we? Waiting until the last minute for buying gifts. Waiting until the right gift for that special person comes along. Waiting for relatives that have traveled long distances. Waiting for Christmas morning—then it arrives. It all happens so fast, and we no longer have to wait. But then what? What comes next?

It seems like we just perpetually wait for something to arrive, and then when it does, we are rarely living within that moment. Instead, we’ve already moved onto the next.

This mix ends with one of the most devastating songs—“It’s in Every One of Us,” performed by John Denver and The Muppets. The version on here is taken from the holiday album John Denver put out with The Muppets a long time ago. The version I grew up with is from the TV special “A Muppet Family Christmas,” which aired in 1987. Kermit’s nephew Robin leads the whole Muppet family in singing a small portion of the song at the end of the special. There’s no doubt that it’s structured as an emotionally manipulative moment, and it works every time. I start to cry whenever I hear it.

So if you, too, have misgivings about the holidays, or if you love everything about them—either way, I hope you find something in this mix that you can identify with and take with you. Consider it a gift to you that you can’t exchange for a different size or for something of equal or lesser value.