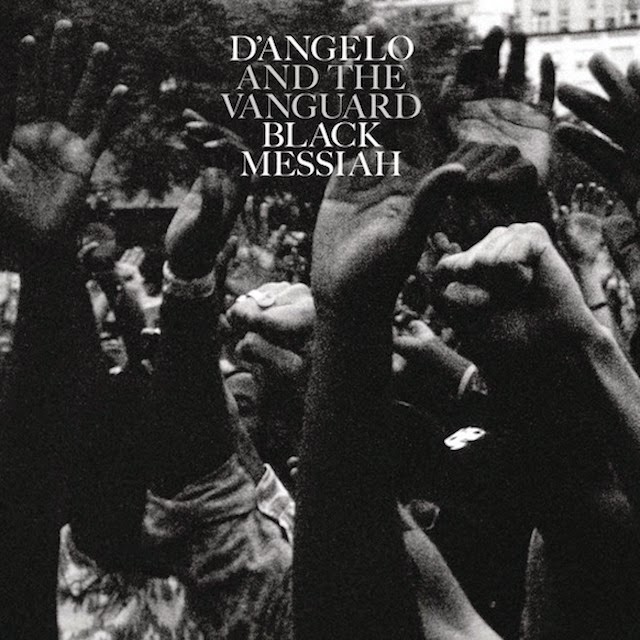 Black Messiah arrived at midnight on Sunday, making every music critic, professional or otherwise, look like a fucking idiot for having already turned in their “Best of 2014” lists in November.  As if Rolling Stone didn’t look bad enough by selecting U2’s latest as the “best” record of 2014, they look even worse now.

D’Angelo’s decade spent out of the spotlight has been well documented, specifically in a lengthy GQ profile after his return to the stage in 2012. The short version of it involves his self-consciousness over the objectification he was feeling after filming the video for “Untitled (How Does it Feel?).” Then there was the weight gain. And drug problems. And problems with the law. And trips in and out of rehab—the whole time, the promise of follow up to Voodoo was always “in the works.”

We should just be thankful that he did, because it is truly a gift.

15 years in the making, it is a worthy follow up to Voodoo; an album worth the hype and worth the time it took to be made and released. It’s a dark, claustrophobic, complex affair; it’s sexual, political, and spiritual. It’s a natural continuation of the boundary pushing that D’Angelo started in 2000—it both picks up where Voodoo left of with it’s smart blend of R&B, funk, soul; at the same time, there are moments that are completely original and innovative—sounding like nothing else that D has ever done before.

And then there’s a song like “The Charade.” A three-minute, guitar driven song that somehow comes off as the best song on the entire album. Hyperbole aside, it’s one of those perfect musical moments where all the right elements come together and it sounds so effortless. Without a doubt, it’s an example of D’Angelo’s talent as a performer and songwriter, and in 2014, it’s a triumph of the human spirit.

(It's worth noting that at, like, 11:20p or whatever, sitting in bed, headphones on, this .GIF of Wee-Bey was basically me, listening to "The Charade," with my wife completely unaware, reading a book about Stanley Kubrick and the Holocaust.)

In the shadows of years and years of racial unrest culminating in riots and demonstrations, Black Messiah begins as the soundtrack for your looting in Ferguson or your “die in” in New York City. The stunning double shot of “Ain’t That Easy” and “1000 Deaths” are the album’s most innovative tracks, with D’Angelo and his band The Vanguard just simply not caring what you think. The album itself opens with guitar feedback and dissonance, before settling into an unnerving, off-putting creeping bass line that then, makes way for D’Angelo’s other worldly, multi-tracked voice to come in. He’s always had a bit of a Prince lean to him at times when he howls away, and as the opening line of “Take a toke of smoke from me as you dream inside” resonates, it’s easy to think this is a Prince record, if Prince still cared about making music that people wanted to hear.

Then later, on “1000 Deaths,” it’s the revivalist preacher sampled at the beginning, juxtaposed against steady drumming that is all blasted to pieces by the scuzzy, oppressive funk-slap bass that pretty much destroys everything in sight. “1000 Deaths” is well-organized chaos—a dizzying mix, assisted by the impressive production values that run throughout the album and are very noticeable in key moments.

But Black Messiah isn’t all listener unfriendly post-funk (if that’s even a real theoretical genre at this point.) D’Angelo is able to slowly ease back into familiar territory on songs like “Sugah Daddy,” an upbeat, rockling, sexual and dare I say fun jam that shows even on an album as heavy as this one can be, there’s a sense of humor buried somewhere under all those layers with lyrics like “I hit it so I made the pussy fart.” The same goes for the self-aware “Back to The Future,” which directly references his sex symbol status of the early 2000s.

As an artist refusing to be backed into a specific genre, D’Angelo scales back the “in your face” funk in other parts of the record, with the smooth “Really Love,” the jazzy “Betray My Heart,” and the huge sounding closing track, “Another Life”—showing both an homage to his own history on Brown Sugar and Voodoo, but still showing how forward thinking he’s become within the last decade plus.

And amazingly enough, between all of this shifting back and forth sonically, Black Messiah has an incredibly cohesive feeling. Yes it’s a record that you can select tracks that you like more than others, and yes, there are hooks that get stuck in your head (looking specifically at “Sugah Daddy” on this one); but it’s best to be taken as a whole with little to no interruptions. And as much as I loathe the term “headphone record,” Black Messiah is best heard through headphones so that you can focus on the meticulous and thoughtful production. The attention to detail, specifically in some of the ways the drums are produced, is just beyond admirable. I mean I know that dude had his setbacks with substance abuse and the law and whatever, but it would take anyone 15 years to make a record that sounds like this.

For a long time, I would joke about D’Angelo receiving “career direction” from Kevin Shields of My Bloody Valentine. Shields famously bankrupted a recording label, and spent 20+ years recording the band’s follow up to Loveless—arriving, out of nowhere, in the form of 2013’s m b v. While they are from different genres, both D’Angelo and Shields have both figured out how to circumvent the traditional music hype machine, thus being two rare artists that have actually figured out how to surprise their audiences in an industry where there are little to no surprises left.

I honestly didn’t think that Black Messiah would come out this year; or even at all. D’Angelo, as an artist, doesn’t seem like he’s made for these times. He has been noticeably absent from social media—the desired platform of artist to fan communication in 2014. He doesn’t give a ton of interviews. And in 2013, he canceled a long string of concerts due to an undisclosed medical emergency—which was never explained, and dates were never rescheduled.

But here we are, sitting with this unexpected gift in the form of an album. I mean, do we even deserve something like Black Messiah?

It’s a record that near perfectly captures the tumultuous time that we live in today. For all of the anger, frustration, and confusion, there is still hope, love, and a yearning for some kind of fun to relieve us of our burdens. Black Messiah is both incredibly contemporary, yet somehow, timeless. It isn’t a perfect, or flawless album—unfortunately “The Door” is a bit of a clunker—but we are not perfect or flawless people, and we don’t live in a perfect world.

D’Angelo is obviously a complicated individual and Black Messiah is a dense, complicated listen that demands your full attention. We live in complicated times without easy answers, and I couldn’t think of a better soundtrack to close out these final days of 2014 than this.

Black Messiah is out RIGHT NOW digitally and on CD via RCA, with the vinyl edition coming in February 2015.

*It's also worth noting that my editor at the Southern Minnesota Scene magazine asked me to contribute this review to the Scene website. It's really no different, but you can read it here.