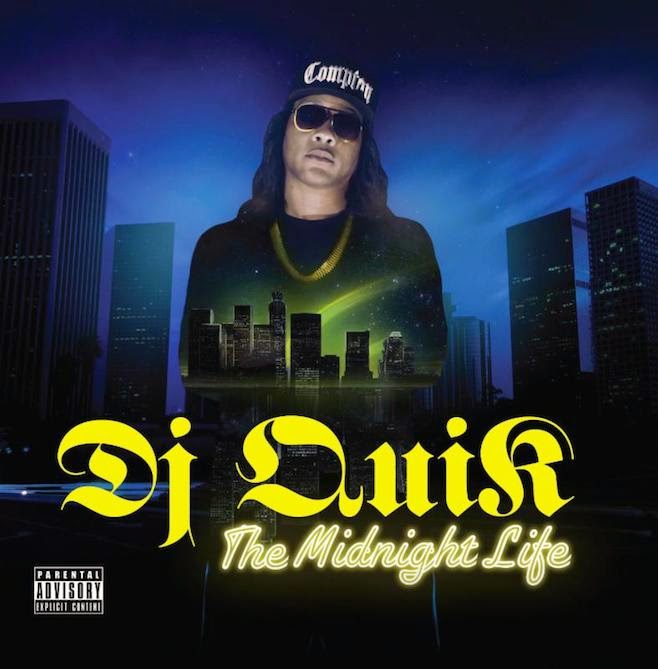 There was a time, not even in the early days, but in the mid-2000’s, when Pitchfork did not cover nearly as much rap music as it does now.  Back then, when it DID cover a rap album or single, it seemed like was something that you really needed to take note of.

As tastes started to shift, and their target audience (white people) started to gravitate towards sounds outside of other white people playing guitar driven music, slowly but surely, the ever-capable staff of P4K started to cover rap and hip-hop, but much like everything else, it’s still given an elitist slant.

One artist that the site has always championed, in recent memory anyway, is West Coast pioneer DJ Quik. And because I can’t think for myself as a person, and rely on what the Internet tells me is good, because Pitchfork gave Quick’s new album, The Midnight Life, an 8.2 (but not “Best New Music”! Gasp!) I thought I should give it a listen.

I’ve been noticeably absent from what’s been hot in rap and hip-hop in 2014. Part of that is maybe because of the sheer amount of mixtapes out there on sites like Datpiff—it just becomes too much to find that “one thing” that is better than others. There’s also been a real lack of marquee name releases for me to give a shit about this year—there’s been no Yeezus, no My Name is My Name. No Magna Carta Holy Grail for me to make fun of.

Quik’s album, The Midnight Life, is a refreshing example that rap music, as a whole, doesn’t always have to take itself seriously. It’s clunky and awkward, but it does so in such a charming way you can’t help but at least like it a little.  Or at least smile a little when you listen to it. Musically, it aims for a smooth, West Coast sound—but it’s worth noting that this is different from the “G Funk” West Coast sound of contemporaries like Dr. Dre and early Snoop Dogg.  While songs from Dre’s The Chronic relied on sampling to create a laid back, yet dark, sound that was startling when juxtaposed to straight up dirty, claustrophobic sounds coming from the East Coast, Quik seems to prefer creating beats using (albeit synthesized) instrumentation.

The record opens up embarrassingly enough with a slow skit, where Quik tells someone that what hip-hop needs right now is a banjo. And despite the laughter of the two protagonists in said skit, Quik delivers on his promise, sort of, with a MIDI-banjo sound on the album’s first real track, “That Ni**a’z Crazy.” It’s the kind of generic sounding rap “muzak” that you may here on a show like “Pimp My Ride” while the camera does all kinds of CRAZY shots and angles filming the ride that has just been pimped.

Following that are two songs that owe quite a bit, at least I feel, to the recently deceased DJ Rashad—both “Back That Shit Up” and “Trapped on The Tracks” are structured around the repetition of specific phrases: in this case, the phrases also happen to be the titles of the songs. It’s something that Rashad used heavily, and successfully, on what would be his only full-length album, Double Cup.

Later, on “Life Jacket,” Quik brings in a female vocalist to sing the hook, playing a keyboard along with her—it’s, again, incredibly clunky and always feels like it’s on the verge of combusting. It’s reminiscent, to an extent, of how rushed and sloppy an album like Ghetto D by Master P sounds.

While he does enlist numerous guest stars, Quik himself, aside from being a producer, is also an MC. As my wife would say, his flow is “not the illest.” Despite Quik’s abilities, or lack there of, as a rapper—lyrically there are some moments on The Midnight Life that made me laugh (see “I never wash my ass and my face with the same towel” on “The Conduct.”) There is also quite a few that made me cringe a little too, however—like “I’m so cool I can nut ice cream,” delivered straight faced on “That Ni**a’z Crazy.”

The Midnight Life is a reminder of a different time for hip-hop. In its effort to be a “fun” album with a sense of humor, it arrives very unassumingly and astoundingly rough around the edges (presumably on purpose.) Quik’s beats are not slick, but they are at least always interesting to listen to—and if anything, he knows how to write a hook. In his mid-40’s, Quik is a legend in the industry, and he’s got really nothing he needs to prove to anyone. And in that, proves that he can produce a big, colorful sounding record that serves as a reminder that rap music, at one point, had a sense of humor.

The Midnight Life is out now via Mad Science.