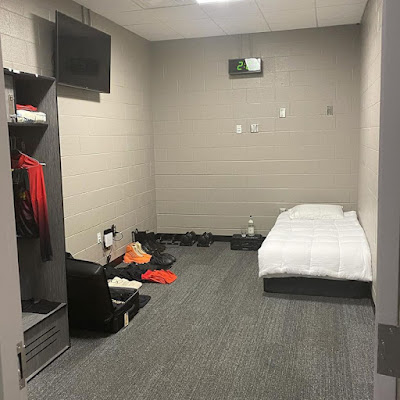 I don't think, in the years I have been making various hot mixes, I've ever made it to five in one year, or five that celebrate the music released in the year. Usually there are, like, three really great ones, and then maybe a fourth that I am not certain about the quality or continuity of, once it's finished.

The structure of this one came together pretty quickly, and I found myself experiencing what could only be called "summertime sadness" as August drifted into September, which is why the tone of this collection, especially in its second half, shifts into more melancholy.

As is customary, this is available as a seamless mp3 for downloading and listening on whatever device you choose, as well as a Spotify playlist to take with you "on the go," or something.

Also, I was, like, way too depressed when I was finalizing all of this, and so the cover art is just this meme-able photo of Kanye West's living quarters in Mercedes-Benz Stadium, where he was allegedly finishing Donda after the first listening event he held in July.

I Know It Ain't Easy to Love Me