Every Day is Exactly The Same - A 'Pandemic' Mixtape part two 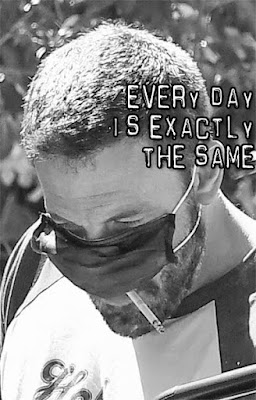 Dat rona is over, right? We 'won,' didn't we? Mission accomplished?

No. Not really. Things are still weird and bad (and maybe even worse now, since I finished putting this mix together and started putting this post together), and even as businesses are starting to reopen after roughly two months—nothing is really 'better.' We are still living in socially distant, pandemic times.

I walk to work nearly every morning. It began out of necessity about a year and a half ago, and even though my wife (who has been working from home for the last two months) no longer needs to use the car, I still, most mornings, choose to walk. It's a fifteen minute walk, and I usually tell people that it's a time of 'silent reflection.' And with that time that I have, I usually listen to music—often things that are pensive or sad.

A majority of the songs featured on this mix (the second pandemic themed tape) are tunes I listen to on these morning walks—many of them are really sad and are more just a reflection of me—they may have little, if anything, to do with the theme of these times. Some of these songs I intended to include on the first mix, and just simply forgot to sequence them in, or thought about how they would have worked later on.

And there is some overlap here with new music that I have really been enjoying—songs that'd usually find their way into a commemorative hotmix (the volume three playlist is certainly taking shape on my computer) but instead, I am placing them here.

As with the other mixes I have assembled so far this year, I have started to use Spotify as a means of getting the tunes out in a slightly easier to access format for folks who do not want to download a seamless, hour long mp3, and just want some shit they can stream. However, while the tunes between both editions of this mix are technically 'the same,' there are different versions of two songs on the seamless mp3, as a 'bonus' for those of you who'll listen to that; but mostly because they are the preferred version of the songs in question—those versions are just simply not available on streaming services. I guess.

Every Day is Exactly The Same (download the mp3 there, or, if you prefer, go to Spotify here.)