I, more or less, wrote what amounts to a puff piece about my wife and her artistic endeavors, for River Valley Woman 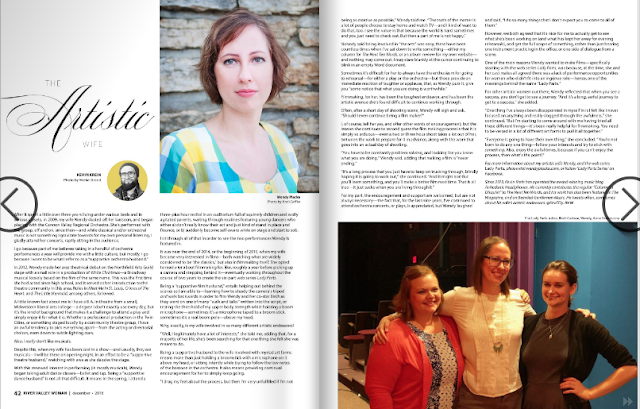 This year has been long, and terrible, hasn't it?

If you are a semi-regular reader of Anhedonic Headphones, or know me in person, you know that sometimes I contribute material to other places. Most recently, I've been writing articles for The Wagazine, a quarterly magazine published in Rochester, MN, that is, as you probably guessed, primarily about companion animals.

Since the summer of 2017, I also have been contributing off and on to River Valley Woman, a women's magazine published in the Mankato area. It began innocuously enough with writing something for their annual 'Men's' issue, and I've managed to put together a handful of other things for them as well.

This year has been long and terrible, and I've spent the six or seven months working through a pretty severe depression brought on by grief and loss. Needless to say, writing isn't always very easy, and there are times where it's a chore to put together the reviews for this site that, like, only 40 people read (and probably only read about half of), let alone sign myself up for something to be published elsewhere. My own deadlines are always negotiable; it doesn't really work that way with others, especially in the world of print.

I sent Eileen, my editor at River Valley Woman, an email earlier this fall with a subject line saying 'I haven't forgotten about River Valley Woman.' And I hadn't. It's just that each issue has a theme, and I can't always find an easy point of access to write something compelling about each theme. December's theme was about the arts, and performance, and it seemed like a good opportunity to write about my darling wife, Wendy, the exponentially more charming and friendlier of the two of us, who is an actor, musician, and director.

While this piece is, like, 'interview based,' since I did interview her at length about this stuff, it arrives as a bit of a puff piece about her many endeavors- most notably her film making. It's good timing, I suppose, that this is in the December issue of the magazine, because she just completed the extended holiday special of her web series, "Lady Parts."

Also, while you're at it, she (and I) would love it if you also watched an experimental short film about a lion tamer, that she made this summer as part of a Minnesota short film festival.

You may check out the digital version of River Valley Woman here (this piece is on page 42.) Or you may read it below.


After it spent a little over three years living under various beds and in various closets, in 2009, my wife Wendy dusted off her bassoon, and began playing with the Cannon Valley Regional Orchestra. She’s performed with the group, off and on, since then—and while classical and/or orchestral music is not something I gravitate towards for my own personal listening, I gladly attend her concerts, raptly sitting in the audience.

I go because part of me believes taking in a handful of orchestra performances a year will provide me with a little culture; but mostly, I go because I want to be what I refer to as a ‘supportive orchestra husband.’

In 2012, Wendy made her area theatrical debut on the Northfield Arts Guild stage with a small role in a production of White Christmas—a Broadway musical loosely based on the film of the same name. This was the first time she had acted since high school, and it served as her introduction to the theatre community in this area—roles in Meet Me in St. Louis, Crimes of The Heart, and The Little Mermaid, among others, followed.

A little known fact about me is I have a B.A. in theatre from a small, Midwestern liberal arts college—a degree I don’t exactly use every day, but it’s the kind of background that makes it a challenge to attend a play and simply enjoy it for what it is. Whether a professional production in the Twin Cities, or something staged locally by a community theatre group—I have an awful tendency to pick everything apart: from the acting or directorial choices, even down to subtle lighting cues.

Despite this, when my wife has been cast in a show—and usually, they are musicals—I will be there on opening night, in an effort to be a ‘supportive theatre husband,’ watching with awe as she dazzles the stage.

With this renewed interest in performing (in mostly musicals) Wendy began taking adult dance classes—ballet and tap; being a ‘supportive dance husband’ is not all that difficult. It means in the spring, I attend a 3+ hour recital in an auditorium full of squirrely children and easily agitated parents, waiting through routines featuring young dancers who either a) don’t really know their act and just kind of stand in place and flounce, or b) suddenly become self-aware while on stage and start to sob.

I sit through all of that in order to see the two performances Wendy is featured in.

It was near the end of 2014, or the beginning of 2015, when my wife became very interested in films—both watching what are widely considered to be ‘the classics,’ but also in filmmaking itself. She opted to read a lot about filmmaking for, like, roughly a year before picking up a camera and stepping behind it—eventually working throughout the course of two years to create the six-part web series Lady Parts.

Being a ‘supportive film husband,’ entails helping out behind the scenes as I am able to—learning how to steady the camera’s tripod and walk backwards in order to film Wendy and her co-star Birch as they went on one of many ‘walk and talks’ written into the script, or testing the threshold of my upper body strength while hoisting a boom microphone—sometimes it’s a microphone taped to a broom stick, sometimes it’s a real boom pole—above my head.

Why, exactly, is my wife involved in so many different artistic endeavors?

“Well, I legitimately have a lot of interests,” she told me, adding for a majority of her life, she’s been searching for that one thing she felt she was meant to do.

Being a supportive husband to the wife involved with myriad art forms means more than just holding a broomstick with a microphone on it above my head, or sitting intently while trying to follow the low notes of the bassoon in the orchestra; it also means providing continual encouragement for her to simply keep going.

“I drag my feet about the process, but then I’m very unfulfilled if I’m not being as creative as possible,” Wendy told me. “The truth of the matter is a lot of people choose to stay home and watch TV—and I kind of want to do that too. I see the value in that because the world is hard sometimes and you just need to check out. But then a part of me is not happy.”

Nobody said being involved in ‘the arts’ was easy; there have been countless times when I’ve sat down to write something—either my column for The Next Ten Words, or an album review for my own website—and nothing may come out. I may stare blankly at the cursor continuing to blink in an empty Word document.

Sometimes it’s difficult for her to always have the enthusiasm for going to rehearsal—for either a play, or the orchestra—but those provide an immediate reaction of laughter or applause, that, as Wendy puts it, give you “some notice that what you are doing is worthwhile.”

Filmmaking, for her, has been the toughest endeavor, and has been the artistic avenue she’s found difficult to continue working through.

Often, after a short day of shooting scene, Wendy will sigh and ask, “Should I even continue being a film maker?

I, of course, tell her yes, and offer other words of encouragement, but the reason she continues to second guess the film making process is that it is simply so arduous—even a two or three hour shoot takes a lot out of her, between the work to prepare for it in advance, along with the work that goes into an actual day of shooting.

“You have to be constantly problem solving, and looking like you know what you are doing,” Wendy said, adding that making a film is “never ending.”

“It’s a long process that you just have to keep on trucking through, blindly hoping it is going to work out,” she continued. “And it might not! But you’ll learn something, or whatever, and you’ll make a better film next time. That is all true—it just sucks when you are living through it.”

For my part, the encouragement and support are welcomed, but are not always necessary—the fact that, for the last nine years, I’ve continued to attend orchestra concerts, or plays, is appreciated, but Wendy laughed and said, “I do so many things that I don’t expect you to come to all of them.”

However, we both agreed that it’s nice for me to actually get to see what she’s been working on (and what has kept her away for evening rehearsals), and get the full scope of something, rather than just hearing one instrument practicing in the office, or one side of dialogue from a scene.

One of the main reasons Wendy wanted to make films—specifically starting with the web series Lady Parts, was because, at the time, she and her cast mates all agreed there was a lack of performance opportunities for women who didn’t fit into an ingénue role—hence, one of the meanings behind the name “Lady Parts.”

For other artistic women out there, Wendy reflected that when you see a success, you don’t get to see a journey. “And it’s a long, awful journey to get to a success,” she added.

“One thing I’ve always been disappointed in myself in is I felt like I never focused on anything and really slogged through the awfulness,” she continued. “But I’m starting to come around with me having tried all these different things—it’s been really helpful for filmmaking; you need to be versed in a lot of different art forms to pull it all together.”

“Everyone is going to have their own thing,” she concluded. “You’re not born to do any one thing—follow your interests and try to stick with something. Also, enjoy the awful times, because if you can’t enjoy the process, then what’s the point?”