Album Review: Swervedriver - I Wasn't Born to Lose You 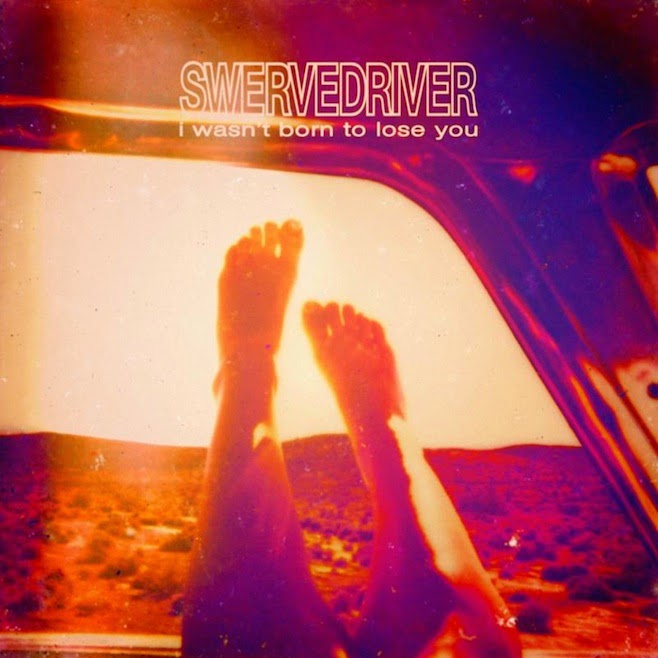 Reunions are nothing new. Bands break up and then get back together (and sometimes break up again) all of the time at this point. If you stay away long enough, allowing your canon to achieve new life from later day audiences discovering it, your reunion turns into a big deal—you make big announcements, you headline festivals, you are offered tons of cash in exchange for said festivals, etc.

We’ve gotten to the point with the whole shoegaze reunion thing that we’re now getting into the second and third tier bands getting back together, expecting people to get any shits about it. In 2007, My Bloody Valentine reunited, played a bunch of odd dates here and there, played festivals, and then six years later, and released its much hyped and mythologized third album. They toured sporadically in support of it, confessed how much they hated touring, and then claimed they were working on an EP of new material—meaning, we’ll see them again (maybe) in another 22 years.

In 2014, it was Slowdive—of “Alison” and “40 Days” fame. This year, it’s Ride, who are remembered for the sweeping grandeur of “Vapour Trails.”

Not to sell them short, but at this point, you may as well tell me that Chapterhouse or The Boo Radleys have reunited, as we continue to tick our way down the list of “every shoegaze band from the 1990s” list.

Swervedriver actually reunited in 2008 and toured stateside at one point with nu-gazers Longwave (also now defunct, so I’m looking forward to their reunion tour in 2018.) But I Wasn’t Born to Lose You marks Swervedriver’s first new album since 1998.

I think at some point in my life I probably tried with this band, but I always kind of looked at them with a little bit of a raised eyebrow, thanks in part to questionable song titles like “Last Train to Satansville.”

Nearly two decades have passed between recordings for Swervedriver, but from the first notes of I Wasn’t Born to Lose You, it’s clear that the “90s sound” is alive, and well, and living within the band, even in the modarn year of 2015. And while usually I find something charming and endearing in a band that has that affect, in this case, since the band is originally from the 90s, the album, right out of the gate, comes off as incredibly stunted (and not in, like, the good, “urban” way.”)

I Wasn’t Born isn’t unlistenable or anything, but it’s also not a very interesting album. It kind of limps along lifelessly through the first half, with the only real signs of life arriving in the lengthy “Everso,” a track that I was surprised enough by to make wonder if I had written this off too early. But then “English Subtitles” comes on, and the band switches gears right back into the MOR malaise.

There’s also a point when I became concerned I was accidentally listening to a Foo Fighters album when the late in the game rawker “Deep Wound” started.

The real issue I take with this album is that it’s not bad. It’s just completely unmoving to me. It’s too polite almost—too polished sounding, too restrained, not very exciting. It’s certainly pleasant to listen to, but part of the charm of shoegaze, or at least the noisier end of it, is that it’s not an inherently pleasant genre. It’s obnoxiously loud—deafening at times. This is way too sterile—conjuring up a bit of a restless boredom when one listens, so that it, unfortunately, is not the kind of album that could grow on you due to multiple listens, because it’s not really the kind of thing that is warranting itself to multiple listens.

My lack of interest in this record has me wondering if I’ve outgrown “shoegaze” as a genre. I certainly hope not, though most days when people are foolish enough to ask me what I’m listening to lately, I tell them I only listen to hip-hop and ambient droning. I loved shoegaze enough to create “Shoegaze Tuesdays” on the radio program I used to host from 2010 until 2012, which I think was sometimes maybe just too alarming to play on the AM radio in our community. But since last summer’s Rend from Crisis Arm, there hasn’t really been a ton of “shoegaze influenced” music that I’ve been hearing that has really done something for me.  And if it’s not me that has the problem, then is it the revitalization in the genre that has played itself out for the time being?

Maybe I’m the wrong audience for I Wasn’t Born to Lose You because Swervedriver were a band that I was made privy to so long after the fact, and maybe a “reunion” album isn’t the best place to start with them. Maybe this is for true fans only who were in their 20s or 30s when Raise came out in 1991 at the height of the scene. It all just seems a little disingenuous to me—this record. Like, you can retain your original sound, but nearly 20 years down the line, bringing something new to the table as well is also usually a good idea.

I Wasn't Born to Lose You is available now digitally and on CD, and may possibly be available mid-March on vinyl of varying colors, via Cobraside.