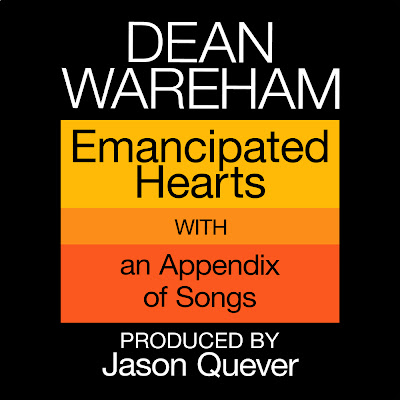 For an artist that’s been at it for as long as Dean Wareham has been—from Galaxie 500, to Luna, to his project with his wifey Dean & Britta—it seems worth noting that Emancipated Hearts is his first solo release. Beginning humbly with the shambling indie rock you can still hear echoes of in bands today, Wareham’s work has slowly transformed over time into the straightforward pop he makes with his boo. So it seems also worth noting that Emancipated Hearts is a bit of a step back for him as far as the sound goes—falling somewhere slightly after the sloppy, unpolished Galaxie 500 vibe, but slightly before everything else in his canon to date.

More of an EP than anything else, it plays its hand a little early with the best song opening things up—“Love is Colder Than Death” waltzes and shuffles along, prior to heading into psychedelic-folk territory (think Syd Barrett) on the meandering title track, and “The Deadliest Day Since The Invasion Began.”

In the early days of Galaxie 500, Wareham yelped more than he sang, and it worked well—for the most part, it still holds up to this day. He’s aged into his voice, far less yelpy now, like 25+ years later, but as he strains and croaks through some of the songs, it becomes a tad bit more of an acquired listen.

Emancipated Hearts has been out for a minute, and I’ve just apparently been too lazy, busy, and/or unmotivated to move it to the top of the “to review” pile. Upon my initial listening, I thought, “Oh wow what a great fall record. This is really good.” But now upon further inspection, I find myself backpedaling on my own opinion. Wareham certainly has not created a bad effort—but I find that there is little that makes it a memorable listen.

The second half opens “The Longest Bridges in The World,” a song that remains slightly unfocused as it plods along, but it relies on some interesting reverby guitar soloing in an effort to keep things moving. The idea of a “strong starter” to each side before losing steam quickly is repeated again in the back half of Emancipated Hearts—the closing track, “Air,” is relatively sleepy and forgettable, while “The Ticking is The Bomb” attempts a bit of a Galaxie 500-vibe, but it’s on a shelf that Wareham can’t quite reach.

On the compact disc version of Emancipated Hearts, we are treated to not one BUT two bonus tracks—the first being a remix of the title song. And damn, let’s face it. This is the kind of music you do not need to remix. Jesus Christ what a hot mess.


The second additional song is the slow, drowsy “Living Close to The Ground.” And it was by the time that this song finished just now that I realized that Wareham isn’t exactly making “dad rock,” but I feel that the target demographic for this EP is mos def the “cool dads” of the world. The dads who were not dads when Galaxie 500 were in their heyday—dads who went on to become dads, who will still throw on “Strange,” or “Tugboat” in their Subaru station wagon when they aren’t hauling their kids around—dads who still want to be connected to their own musical history via the present day output of an artist such as Wareham.

Emancipated Hearts is out now, via Sonic Cathedral/Double Feature.