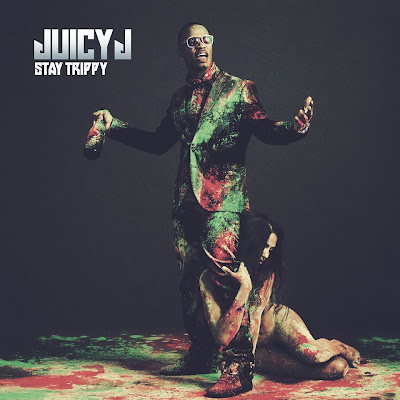 I think it was during the first listen of the new Juicy J album, Stay Trippy, when I thought to myself, “Why do I even bother trying to listen to hip-hop records with the intent of writing a reviewing them for this blog?”

I’m no expert at hip-hop. I don't claim to be. Rap music has always been around in my life. I grew up during the East Coast VS West Coast feud that ended in the deaths of Tupac Shakur and The Notorious B.I.G. The early-to-mid 90’s was an incredible time for hip-hop: Nas, Mobb Deep, Wu Tang. It’s these records that I love, and for some reason, I want EVERY rap album to sound like these. It’s unfair to compare new albums to such revered classics, but I can’t help myself.

It’s with those comparisons that I almost always end up being let down by new hip-hop records. I try to love them. I really do. And to an extent I like them, but rarely is there anything that I’m going return to later on.

So this brings us to Stay Trippy. Juicy J is a member of the iconic Southern rap group Three Six Mafia—you may remember them from when they won an Oscar aware for their original song “It’s Hard Out There For A Pimp.” Which as we all know is a valid point. It really is. Hard out there for a pimp.

Three Six Mafia is, for the most part, finished now. And Juicy J’s goal at the moment is to achieve  mainstream success as a solo artist. He’s already well on his way, to an extent—Stay Trippy’s first single, released in 2012, “Bandz A Make Her Dance” went platinum. "Bandz" shows up towards the end of the album. It's an interesting song, at least from a production stand point. There's something really somber about the synthesizers used on it, but it's an anthem about strippers "clapping without using their hands."

Putting a cinematic in scope twist on Southern Trap style music, musically Stay Trippy juxtaposes a rather simple snare hits and hi-hats with huge sounding synths—J has come a long way from the crude sounding, low-budget beats from his Three Six days.

It’s also worth noting that one of the most melodic, musically interesting songs on the album, “Talkin’ Bout,” features a guest spot from Chris Brown—so when I was kind of feelin’ it the other day, I instantly felt guilty after I realized that.

There are many ideas running throughout Stay Trippy. I wouldn’t say it’s a concept album—it’s way too lowbrow for that. But here is a shortlist of the recurring themes:

Twerking
Lean
College Chicks
Bandz
Bandz; and how they will make her dance
Strippers
Slobbing on Nobs
Weed
Models
Models; and how you need to fuck them
Molly
Money
Money; and how you have so much it requires three hands to count it all
Getting Turnt
Haters
Packin’ Heat

Like I’m not even kidding—at least one of those things, if not all of them, are mentioned in every song.

Needless to say, there’s no real positive message behind Stay Trippy. And really, there’s no depth to this album. It’s a self-aggrandizing record about being rich, a taste for codeine and Sprite, the ability to count all of your money, a love of strippers, and a penchant for having said strippers “slob on your nob.” (Their words, not mine.)

Similarly to the Trap beats on A$AP Ferg’s debut LP, Trap Lord, at its finest moments, Stay Trippy is catchy. Every song is built around repetitive rhythms and easy to remember refrains. It’s a record for having a good time, but if you are incapable of enjoying yourself (like myself), then it may be the kind of album you are unable to identify with at all.