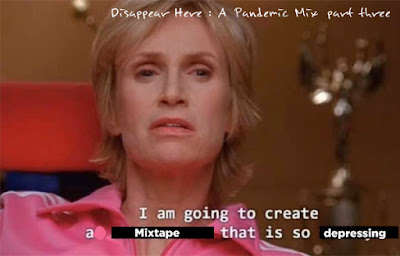 The first two ‘pandemic’ themed mixes weren’t ‘easy’ to make, per se, but in the early days, and months, of all of this, it was a little easier to be cute, or creative, with what songs to pick, and why. The first one, especially, I guess still had a sense of humor within it, before the tone became more serious.

I started thinking about this third collection by gathering four specific songs—one of which, it turned out, I had already used months ago (“How to Disappear Completely”) but had forgotten that. That’s the thing about the last six months—the concept of time means both everything and nothing. Have six months really gone by? Does it even matter what day of the week it is, or what month we are in now? Why do we think about the immediate future like things will be any different, or better? And why does the past—not even the distant past—feel like a lifetime ago that we romanticize?

This mix is probably the most humorless of the three that have been dedicated the concept of living through a pandemic, because it’s become to be about more than just that now.

There is a space between the person who I was at the beginning of the year, and the person who I am now, and the distance continues to grow, pushing the two further apart. And there is a line we are all walking now between wanting to feel nothing, and feeling everything whether we want to or not—and it’s becoming increasingly difficult trying to find the balance between the two.

A number of weeks ago in a conversation with my best friend, she said to me, “Everything seems so hard right now.” We weren’t even really talking about living in, and through, these times—but even when you aren’t talking about it, it has informed so much of our lives now.

There are songs included on this mix that are here because of specific lyrics, or because they create a specific feeling. Some of them are reflective of a hopelessness that I can’t help but feel; some of them are a response to the restlessness that I know I am not alone in experiencing—a wistfulness for the time before this one, or even what wasn’t, or couldn’t have been; the urge to run and never stop.

The desire to simply disappear.

Some of them are a hideous reflection of myself, what living through this time has done, and what it has magnified—the space between who I was at the beginning of this year, and what I have become, and the distance that continues to grow, pushing the two further apart.

Per the trend of this year, the mixtape is available as both a seamless mp3 for your listening enjoyment, as well as a Spotify playlist for ease.

Disappear Here (save as, etc)

Run Away With Me - San Fermin

I Need a Drink - American Football

Have You Seen Me Lately? (from VH-1 "Storytellers") - Counting Crows

The City's Our Song - Harmony Woods

How to Disappear - Lana Del Rey

I Wouldn't Ask You - Clairo

I Wish I Was - The Twilight Singers

I See A Darkness - Will Oldham

I Know The End - Phoebe Bridgers