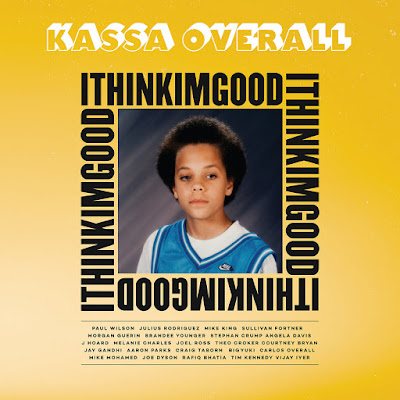 For roughly the last year, there has been a sound, or an aesthetic, or a musical feeling—if that makes sense—that I hesitate to say I’ve been ‘chasing,’ but I have been actively seeking out.

Following the release A Quiet Farwell 2016-2018, the first post-Standing On The Corner project from Jasper Marsalis’ Slauson Malone project, all I wanted was more—more of that kind of an album; a challenging, at times frustrating, at times haunting, at times thought provoking listening experience.

An album that was self described as ‘genre negative,’ and made a mess of the boundaries between jazz, rap, soul, and electronic, all through a bleak, claustrophobic cut and paste way of thinking; an album that found the spaces where the hideous and dissonant converged with the melodic and beautiful.

The sophomore release from Kassa Overall, I Think I’m Good, shouldn’t be directly compared to A Quiet Farwell—for as many similarities as the two releases have, there are, probably, more differences, however, the seamless and impressive blending and blurring of genres (primarily rap and jazz) on I Think I’m Good makes for an album that, after allowing it to reveal itself to you over multiple listens, begins to fill parts of that sought after aesthetic and feeling.

A Quiet Farwell was, among other things, about the Diaspora of African Americans; I Think I’m Good is also a high concept collection of songs, merging both Overall’s own struggles with mental health alongside social justice—specifically incarceration. It’s a dizzying album—one that could, at any moment, buckle underneath the weight of its ambitions, but it really never does, as Overall—a drummer, producer, and rapper—weaves himself in and out of a densely layered soundscape that is full of moments both jubilant as well as melancholic.

Off top, I Think I’m Good is, and I really dislike describing music this way, but it’s a ‘grower.’ It, as an album, at least upon my initial listens, is a little inaccessible, though once you find your way in, it becomes a record that reveals itself to you quickly—going from just a little unnerving to very, very immediate in a relatively short amount of time. There’s a lot to unpack, both musically and thematically, and even though it does have moments of head-nodding bliss thanks to the collision of jazz and hip-hop, I Think I’m Good is, at the end of the day, a record that demands a lot from its listeners, but is worth the effort.

I think the thing, initially, that I found off-putting in a minor way, or at least stood as a barrier to fully accessing I Think I’m Good is the way, right out of the gate, Overall merges organic sounds with something very chilling—that element is his auto-tuned, distorted vocals, an element that took me by surprise, but an element that, after a number of times through, came to appreciate and understand what that layer adds into the album as a whole.

I Think I’m Good is, more or less, meant to be experienced as a whole; yes, certainly, there are portions of one track or another that are slightly more infectious in their execution than others—but it is an album based around specific ideas, and the album itself benefits from a beginning to end listen because of the immersive quality built into it.

*
I was a joyous child, if I ever was a child

The thing that makes I Think I’m Good such a compelling album, outside of the musical arranging itself, is the way Overall juxtaposes sorrow and joy, often overlapping them or letting them collide within a song—something that creates poignant and memorable results.

After a warbled synthesizer welcomes you into the album’s first track, “Visible Walls,” the first thing you hear is Overall—his voice, low, somewhat monotone, distorted slightly and auto-tuned, presented in a speak/sing manner—saying “I hope they let me go tonight”; then, after an enormous instrumental pause—where additional layers are being added in and swirling around, he speaks again—“I pray that you can sleep tonight.”

Throughout a bulk of I Think I’m Good, Overall does this—using brief, evocative phrases that are vivid enough to capture your attention and ambiguous enough to leave a lot to the imagination. The album’s second track, “Please Don’t Kill Me,” is probably the most obvious example of this technique being executed. His vocals, more distorted and robotic sounding than on the previous track, implores with little emotion—“Please don’t kill me in your sleep. I can’t breathe when I get down.”

It’s also a trick he pulls off with song titles that are sequenced together—like the frenetic, jazzy third track, “Find Me,” and the song that arrives right after it, the more hip-hop and soul oriented “I Know You See Me.”

The usage of stark, lyrical imagery in such a whirlwind of an album like this comes its peak during the second half, on the very personal “Landline.” Musically, it’s the most frenetic and unpredictable of the bunch, coming together like a piece of performance art the way the instrumentation, vocal contribution, and additional effects play off of one another throughout. Featuring Overall’s brother Carlos—unsurprisingly enough, a jazz musician as well (he plays saxophone)—“Landline”’s lyrics unfold like a spoken word poem written in a fever dream, fragmented, disorienting, pensive, but always evocative.

“I was a joyous child, if I ever was a child,” it begins. “Memories feel like dreams deferred; and time looks like a circle,” Overall continues, as he moves through stark, somewhat bittersweet ruminations on his childhood, before coming to a pregnant pause in the song’s structure—“In my waking life, I didn’t have a lot of pain…but I did have nightmares.”


Even though it is best consumed as a whole, I Think I’m Good does have moments that work on their own, as well as moments that are more successfully executed than others, and the more I listen to the album, it seems the tracks that are less focused on social justice, and more on the mental health aspects of the narrative, as well as the few standalone instrumentals that do not lean too heavily into one of the album’s thematic elements, are the strongest.

One of the surprising elements that revealed itself over many, many listens of I Think I’m Good is that, while the album’s arranging does its best to blur the edges between hip-hop and jazz, and a little of everything in between the two, something that I had not noticed at first was the, perhaps unintentional, homages to the turntabilism and production found on DJ Shadow’s iconic Endtroducing…—specifically found in the skittering, swirling double shot of “Find Me,” which is probably the album’s most chaotic, dissonant piece, and “I Know You See Me,” which musically is one of the most soothing, and groove oriented, though the rapped verse includes some lyrics (“Their hearing got AIDS”) that register as mildly problematic.


Structurally speaking, I Think I’m Good isn’t exactly ‘front loaded’ with its most accessible or energetic material—an album like this isn’t about ‘energy,’ per se, but the first half of the record is noticeably more cohesive in its tone when compared to the second half, which isn’t exactly unfocused in comparison, but there is palpable shift once you reach the halfway mark.

The rollicking, percussive and piano heavy “Darkness in Mind” is one of the second half’s standout moments—mostly thanks to the way the pianist Sullivan Fortner deconstructs something borderline classical, or at least very formal, sounding, as well as the album’s swooning, somewhat tense closing track, “Was She Happy,” a piece dedicated to the late jazz pianist, Geri Allen. Built around a slow and steady rhythm that occasionally drops out, only to return an and serve as punctuation within the song, “Was She Happy” is primary focused on the dizzying vibrato of the Rhodes piano from Vijay Iyer. It’s a haunting, shimmering, reflective track that, in the end, doesn’t really answer the titular question it asks—which is fitting, I suppose, given that an album of this level of difficulty never really answers the questions it asks, and as it concludes, provides little resolve to its larger thematic elements.

There is a lot that lingers once I Think I’m Good has come to an end—musically, even though it can be a challenging, unruly listen at times, there are elements to it that are infectious, and can stick in your head the way the hook of a pop song might; but there’s also a strange kind of teetering between feeling uneasy, and feeling calm. The calm comes from some of the slinky, smooth grooves Overall has written, but that uneasy feeling comes from what remains—those larger thematic elements and questions—that remain unanswered, after the music has stopped.

The truth is that there are no easy answers when it comes to mental health and social justice, and I Think I’m Good, at its core, is not an easy album—it’s rewarding, yes, as well as wildly fascinating and thought provoking. But it arrives at an uneasy time, and even when it seems like there is going to be a little bit of light let in through the darkness, Kassa Overall works effortlessly to cast a long, musical shadow that is both unrelenting and compelling.

I Think I'm Good is out now as a download, compact disc, and vinyl LP, via Brownswood.