Guest Post: Pieces of You, Pieces of Me (or, Anyone Can Write A Thinkpiece) 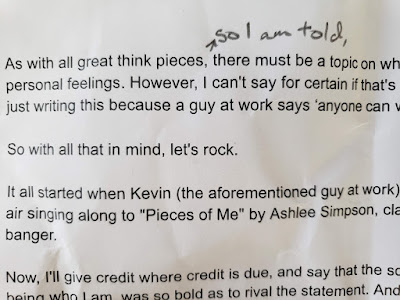 In the six years I've been writing for this site, I have never featured a guest author, let alone offered a 'guest post' spot to anybody1. I suppose it speaks volumes of my friendship with my co-worker Wesley that I believed in what he wrote2, seemingly on a whim, and sent to me, in response to an off-handed comment I made one day at work: that anybody could write a thinkpiece.

As with all great think pieces, so I am told, there must be a topic on which the author has some sort of personal feelings. However, I can't say for certain if that's going to be the case here— I'm really just writing this because a guy at work says ‘anyone can write a think piece.’

So with all that in mind, let's rock.

It all started when Kevin (the aforementioned guy at work) came into the kitchen, hands in the air singing along to "Pieces of Me" by Ashlee Simpson, claiming that this song was an unrivaled banger.


Now, I'll give credit where credit is due, and say that the song is, indeed, good. However, me being who I am, was so bold as to rival the statement. And typically, this is just to get Kevin riled up because, well, it's just kind of amusing to me.

It's all part of the charm.

Kevin went on to tell me that this song was big in his life during the summer of 2004, and that he was ‘going through some stuff’ at that time. This lead me down an internal journey through my own experience with music: how it has both shaped my life, and has been a steadfast companion throughout all of my emotional ups and downs.

Music has a power of all of us, in one way or another. We all have those songs that just the first few notes can give you chills or instantly transport you to a time when that song first came into your life. Any time anyone ever asks me what my favorite song is, I freeze.

I mean, how ya gonna come at me with that Anderson Cooper shit? Some questions are just too hard to answer and that is truly the most difficult question of them all.

Yes, I have the songs that really move me and speak to me—and yes, they are on my list of favorites for sure; but I don't have a favorite song. There is no one song that can earn that title because it all depends on what is going on in my life. I may be in a bad mood and need something to lift my spirits. I may be feeling a little sassy and there's a whole new playlist. 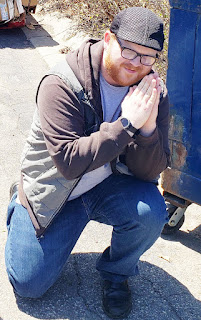 A lot of times, I play music for the people around me. It's actually pretty awesome to have someone point out a song that is playing, and share a story about their own past experiences, be it having a teenage crush on an artist, or the time on a road trip this song came on at the perfect moment watching as the sun dips below the horizon.

These are memories that just stick with us, and being the one to bring out these thoughts in people, through music, is really an amazing feeling.

A while back I was invited to do a podcast (the host is the aforementioned guy, again, from work, Kevin) about songs that were important to me or stood out in some way.

I came up with a list pretty quickly, although looking back, I wish I had taken a little more time preparing. Granted, I have no regrets about the songs I chose, but I feel that I could have done more. In all honesty, I could probably have gone on for hours if I hadn't been given a limit. I really appreciated the opportunity to talk about my songs because, if you hadn't noticed, I have some pretty strong feelings about the whole thing.

Depression. Anxiety. Paranoia; these are things that many of us deal with in silence.

This next part is going to seem a little off topic but it's relevant, I promise.

I was diagnosed with major depression in my mid-teens, but chose to do virtually nothing about it at the time. I was fine for years, I kept myself pretty well distracted. I'd have good days and bad days, as many of us do.

I was good up until about two years ago, when my grandfather passed away—I went to the doctor, got happy pills, and figured all would be well.

Boy oh boy, was I wrong.

This proved to be the beginning of a struggle no one could ever prepare themselves for. I descended into a veritable madness which lead to several trips to the emergency room dealing with some severe suicidal ideation. The last trip I took landed me in a psych ward for a few days.

One out of five stars; would not recommend.

While I was in this state, I was involved with a woman who would keep bringing me songs about people who are fucked up in the head, and she’d say things like, “OMG, that’s so you!,” and "When you hear songs like, this doesn’t it just make you feel like you really are crazy?"

Yes. It does. Especially when I am indeed crazy.

Aside from the fact that most of my issues stemmed from this tumultuous relationship, music still played into all of it. In my state of weak mindedness, I was actually being pushed further into the dark because of her choice of songs.

There’s this episode of “The Walking Dead” where they are trying to use music as a form of torture. It was an upbeat song, very catchy. But the character was locked in a dark cell with little interaction besides this song being blasted at him over and over and over. I suppose it would be tantamount to literally anyone but a child being forced to listen to that “Baby Shark” song.

Just thinking about it sends shivers down my spine.

After my bout with insanity, I started going through Google Play Music, or what Kevin and I have taken to calling “the ol' Google doodab,” checking out the stations I had created when times were good—mostly 90's/00's alternative rock. I hadn't really listened to a lot of that for a while, and II don't really know why, since it had pretty much been all I liked. So I started going through and came across "Desperately Wanting" by Better Than Ezra.


Suddenly, I was sitting in the stands at the Greene County Fair in Springfield, Missouri. I had gone there to see the band Eve 6—who, unfortunately, sucked live I am sad to confess. The last band to take the stage that night was Better Than Ezra; I had heard a few of their songs before, but didn’t really know who they were, or what they were all about. Honestly, it was one of the best shows I've ever seen, considering the circumstances (being that it was at a county fair, and all.) I hadn't thought about that concert in a long time, and now it's one of my favorite things to bring up when people start talking about shows they've been to. 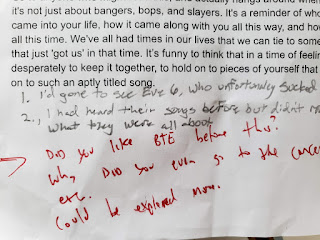 My struggle is far from over but by simply listening to a song, I took a step back toward the light, and if you’ve never done so, I’d suggest you take a moment to read the (albeit unverified) annotation for “Desperately Wanting” on Genius.

You could say it’s fitting.

Not to say that this is my favorite song—but it’s definitely on the list.

I've always liked music. It's always been a big part of my life. That day, after so much darkness, I realized what music can really do, not just be listened to and enjoyed but how it can truly move you.

So to anyone who might read this, and actually hangs around when I'm playing music, know that it's not just about bangers, bops, and slayers. It's a reminder of who you were when that song came into your life, how it came along with you all this way, and how it still makes you feel after all this time. We've all had times in our lives that we can tie to something as simple as a song that just 'got us' in that time.

It’s funny to think that in a time of feeling that you are trying desperately to keep it together, to hold on to pieces of yourself that my friend Kevin would hold on to such an aptly titled song.

1- Just a small aside: within the first year of this site, I asked to be a ‘guest author’ for my friend Colin’s blog, which was about books. I wrote something lengthy about The Perks of Being A Wallflower, and revisiting the book as an adult—realizing how poorly it has aged, and how it’s not the kind of thing you can really ever take with you through time—just the idea of it, or what it meant to you when you first read it. Colin never wrote another post for his own blog, and I have spent the last years feeling like I, more or less, killed his site.

2- I mentioned Wesley at length in the recent essay I wrote about Taylor Swift and “Cruel Summer.” Within the footnotes, I also mention his thinkpiece.