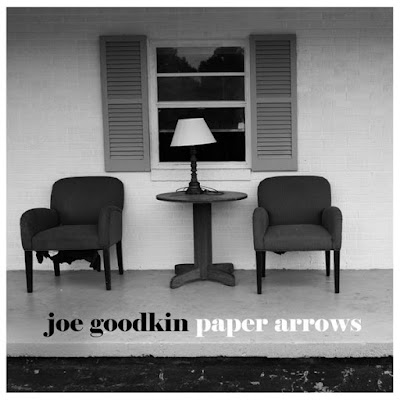 A man and an acoustic guitar.

It’s a delicate balance—it’s either going to work, stripping away the trappings of a song, down to its bare bones, in an attempt to evoke layers that may have been buried in a more bombastic arrangement; or, it’s not going to work, and it’s going to come off sounding boring and lifeless, or worse—like the guy at a party who pulls an acoustic guitar out of nowhere, and insists on trying to bang out the opening to “King of Carrot Flowers” by Neutral Milk Hotel.

On occasion, an ‘acoustic version,’ or someone simply relying on themselves, their voice, and a single instrument, requires patience. In the hands of a capable performer and songwriter, there will, almost always, be an emotional payoff in the end.

Long before he was traversing the United States performing Joe’s Odyssey—a deconstruction of Homer’s The Odyssey that places themes and imagery from the epic poem into 24 songs, performed in a continuous 30 minute cycle; and long before he released the series of unabashedly confessional EPs—the Records of Life, Loss, and Love, the Chicago-based singer and songwriter Joe Goodkin performed under the name Paper Arrows.

With that moniker, and backed by a revolving stable of players, Goodkin released five Paper Arrows albums between 2008 and 2013 before putting the project on hold. I asked Goodkin once, a number of years ago, if he ever toured, or planned on touring outside of Chicago with Paper Arrows and he said no—that it just wasn’t economically possible to take that many people on the road, which is why he’s focused so heavily on both the Joe’s Odyssey performances, and his own solo outings.

Goodkin, however, hasn’t completely forsaken the earlier part of his canon.

In preparing for shows in support of the Records of, Goodkin said he went back into his older material, pairing the songs down to solo arrangements—and the aptly titled collection, Paper Arrows, is comprised of 10 Paper Arrows songs that have been reimagined as just Goodkin and the acoustic guitar, alongside six additional songs that were intended for a Paper Arrows record that never came to fruition, presented here for the first time.

The first Paper Arrows song I heard, four years ago, after I was originally introduced to Goodkin and his music, was “Tell The Kids”—the glitchy, quickly paced opening track to the Paper Arrows effort, Days of Getting By. Musically reminiscent to some of the aspects from “Heavy Metal Drummer” by Wilco, “Tell The Kids,” as it turns out, isn’t about ‘kids’ at all; or at least human children—it’s a lament on Goodkin’s divorce, and the couple having to split up their cat and dog (he confesses to the true meaning behind the song on the opening track of Record of Life.)

So it’s fitting, I guess, that he chooses to open up Paper Arrows with a slightly slower, stripped down version of “Tell The Kids.” The song is no less impactful once you know about the heavy use of metaphor—and it is possibly more impactful in this new setting. With the accouterments of a steady, driving rhythm and skittering drum machine fills removed completely, Goodkin’s lyrics hang a little heavier, and hit a little harder than they did before—“In the end, everyone loses everyone,” he sings, in the song’s devastating opening line. And yes, I was always aware of the gravity of a statement like that, but in this context, there’s a very apparent, and very immediate somber tone taken, casting a long, pensive shadow over the rest of the song, now sung after a number of years of reflection.

From a structural standpoint, Paper Arrows is not sequenced in such a way that it places all of the older material first, then includes these newly recorded songs at the end; no—instead, Goodkin smartly weaves it all together to provide as much cohesion as he can across all of these songs.

Calling these ‘newly recorded’ songs ‘new’ is a bit of a misnomer—Goodkin originally began writing them in 2013 and 2014, after the ‘final’ Paper Arrows record, Good News For Love, was released. He, however, wrote the first song intended for the Records of series, “Gray,” at the end of February, 2014—focusing his efforts on those projects for the next four years.

“But, like, every year—usually in January—I'd come back to this set of songs I had,” Goodkin explained to me. “And either tinker with them or sometimes re-write them more extensively. And I was always surprised with how much I liked them. I sort of had this assumption that they were inferior to the Record of stuff because they were lower concept/lower intensity lyrically. But, especially as I tinkered, some of them really started to turn into things I liked and wanted other people to hear.”

As a whole, Paper Arrows is a way for Goodkin to look back at his songwriting past, as he works to connect it with the way he has been performing and writing for the last couple of years.

For someone who has really only been exposed to Goodkin’s confessional songwriting from his Records of Life, Loss, and Love, there is a surprising contrast between the his usage of real people as characters and true stories as material, compared to the more ‘traditional’ methods of songwriting he used with Paper Arrows. The songs are still incredibly stark in their honesty—but they are also steeped in evocative phrasing and imagery that comes when you use songwriting as a means of blurring the line between fact and fiction.

There is also the honesty that comes from Goodkin as not just songwriter, but a performer as well. In an effort to capture the spirit of his live shows, the material on Paper Arrows was recorded live, in single takes, without the use of additional overdubs or any editing. It makes for what is, at times, an incredibly fragile, fearless, and very human listening experience.
Paper Arrows is constructed so that it eases the listener into the point of emotional catharsis—and outside of one of it’s earliest emotional peaks, and one of the rawest in the way its performed—“Lonesome Sound—the album waits to spring songs like “Why We Work” and the absolutely devastating “Light Out” (one of the album’s finest moments) until well after the halfway point.

“Why We Work,” a slow burning, ‘alternative rock’ ballad from the final Paper Arrows record, Good News For Love, is now balanced on the pensive, steady rhythm of Goodkin’s gently plucked acoustic guitar—and the song’s refrain, “This ship won’t right itself, and that’s why we work,” becomes more of a reflection, or a mantra, regarding love and the human condition, as opposed to just the catchy thing that arrives after a song’s verse is finished.

“Light Out,” taken from Days of Getting By, features what Goodkin said is his wife’s favorite lyric that he’s penned thus far—“I was left knee deep in the water, and trying to catch your tears.” Originally a surprisingly bombastic, enormous sounding song, steeped in emotionally plunked piano notes and lots of borderline frenetic percussion, is now hushed during the verses, while Goodkin lets the tension go as his voice soars with abandon into the song’s refrain.

Being familiar with Goodkin’s output as Paper Arrows—even in the slightest bit—is helpful for understanding the attention to detail and the changes in arrangement on Paper Arrows, but it also isn’t completely necessary. In fact, it may serve a listener better to come to these songs with totally fresh ears, and then retrace the steps back to hear how the original compositions compare. In some cases, depending on where the song falls into the Paper Arrows canon, the changes are not that drastic, like in the case of “Almost Gone,” a stark rumination on the end of love, with lyrics like “Love means nothing if you leave,” and “It’s almost gone—the life we lived.” Taken from one of the earliest Paper Arrows albums, the original version of the song is still primarily just Goodkin performing the song by himself on an acoustic guitar, with just some additional, minor accompaniment.

With “December Static,” one of the oldest songs to be included in the set, Goodkin takes what was originally a very dramatic song on the piano, with lots of additional, atmospheric sounds underneath, and pulls it back to a plaintively plucked meditation, relying in part on the silences that come from when he stops playing the guitar, even for just a moment. It allows the fragility of the lyrics, and the bleak imagery within the narrative he’s created, to rise to the top—“I didn’t mean to let you down/but darkness came without a sound,” he sings at the end of the first verse.

Then, the later, “The winter left of black and blue. And the drugs don’t work like they used to. I didn’t mean to let you go—to walk alone into the snow.”

There are times when, as a songwriter, Goodkin will break the fourth wall—a device that, left in the hands of a less capable writer, could come off as a little saccharine or seem a little insincere. However, since a bulk of his work is so firmly steeped in honesty, there is never really a moment when it doesn’t seem natural when this does happen, or that you give it a second thought. He made use of it quite a bit throughout the Records of series, and it’s something that happens a few times on Paper Arrows—a self-aware choice that, in a sense, tries to break the tension that a song can cause, or that is carried through the album as a whole. It’s most noticeable on “One Hundred Songs,” and based on the title alone it shouldn’t be a surprise, but it also happens again on the album’s closing track, “Something Worth Fighting For,” which is one of the newly recorded songs included.

Goodkin, in press materials for the record, refers to the song as the ‘lyrical conclusion’ to Paper Arrows—“Started this song so many times/Dreamt the refrain a hundred more—Came through doubt and pain to love, and make something worth fighting for.”

What is most surprising throughout Paper Arrows is the imagery, or thematic elements, that Goodkin used when writing these songs; and what is possibly even more surprising is how the continued use of, or reference to, similar imagery and themes, spread across an album comprised of songs written at different times—e.g. “Everything, dear, disappears into the blue,” from the stark “Things We Would Rather Lose,” and the heartfelt “Until we reach the blue, I’ll run with you,” from “Lightning.”

An artist simply relying on themselves, their voice, and a single instrument, requires patience. In the hands of a capable performer and songwriter, there will, almost always, be an emotional payoff in the end—and by the end of Paper Arrows, Goodkin, as he did with his very personal Records of, finds a balance. On those songs, he found the balance between pathos and nostalgia; here, steeped in nostalgia of a different kind, he finds the surprising balance and overlap between pathos and hope.

Paper Arrows will be released on October 11th, as a digital album, via Goodkin's own Quell Records.