Old Timers (or, I Wrote Yet Another Thing About Cats, and It Was Published in 'The Wagazine') 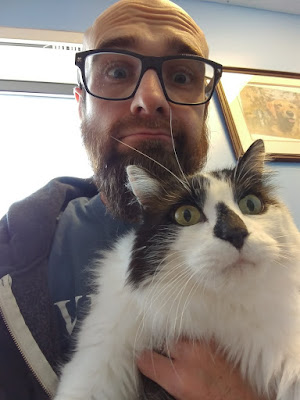 I'm still, more or less, getting the hang of being a 'freelance' writer, and the idea of pitching story ideas to various publications. However, I've apparently been doing something right, and over the last year, have developed a rapport with both the editor of River Valley Woman, as well as the editor of The Wagazine, a companion animal focused, quarterly publication, located in Rochester, Minnesota.

In the summer issue of The Wagazine, I put together a piece about animal communicators; for their autumn issue, with very little time to prep, I was asked to write the cover story about Believet- a non-profit that pairs service dogs with veterans in need.

The gal who edits The Wagazine told me they were looking for stories about cats, and I sent her the two I previously had worked on. I guess one of them made her cry, and she said she isn't even a cat person.

In an effort not to re-write the cat pieces I'd already done, I thought I would look at the three cats who have been at Prairie's Edge Humane Society the longest. One of whom ended up getting adopted shortly after I wrote the piece and sent it in before the deadline.

You can read the piece via The Wagazine, or check it out below.

I’m there twice a week—on Tuesdays as a kennel attendant; then, on Wednesdays, as a volunteer: socializing with new faces and with cats who are having difficulty adjusting to the atmosphere; or simply saying hello to those I’ve developed a bit of an attachment to.

There are times when a cat will be there on Tuesday, and I’ll barely get to know them—by the next week, they’ve been adopted.

There are times when it takes a little while—a few weeks, sometimes a few months, before a cat in question finds what is commonly called their ‘forever home.’

Sometimes months can turn into a year.

And a year can turn into two years.

If I am first to arrive at the shelter on Tuesdays, Johnny usually greets me at the front door; he just seems to appear, waiting intently as I fumble with my keys.

Once I’ve made it inside, he will say hello by flop onto his back; other times, he will slink around me, rubbing against the bottom of my pant legs. He follows closely as I walk through the building, turning on the lights, saying hello to the other cats, and punching my time card—waiting for me to put out his small dish of food before I am able to start any of the other morning tasks. 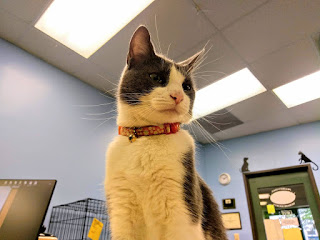 He’s been called many names—I’ve taken to calling him Jonathan—a full, proper first name for a handsome, mischievous, but well-meaning cat.

Johnny has been at Prairie’s Edge since February 2nd, 2016—Groundhog Day. He was brought to the shelter during a terrible snowstorm, and handed off to the Executive Director of Prairie’s Edge, Kathy Jasnoch.

Jasnoch sent the rest of the kennel staff home and waited for Johnny to be surrendered. “He was petrified when he got here, and I stayed with him,” she recalled, adding that to calm him, she gave him some of the special cat food that had come with him.

“I don’t know—the shelter staff calls him ‘my cat,’ but he’s not my cat,” she explained. “We’re just buds.”

Johnny had been part of a litter found in a storage unit in the Twin Cities—kittens that had been originally taken in by Prairie’s Edge. Johnny had been adopted out, but surrendered when his family was expecting a child.

“He likes to bite you a little bit,” Jasnoch continued, adding with the family expecting a child, she understood why he was being surrendered. “But they didn’t want to give him up. It took them a couple of tries to actually do it.”

Because Johnny has been at the shelter the longest, he has free reign of the building. In the morning, after the staff have arrived, you can catch him napping peacefully in a basket in Jasnoch’s office, trying to knock the water pitcher off of the kennel cleaning cart, or attempting to escape the myriad kittens running around in the lobby. 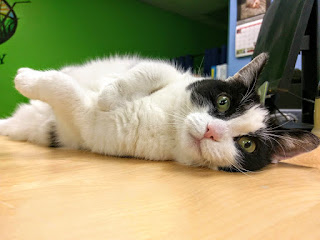 Alicia arrived at the shelter in September of 2016. A stray, picked up by Prairie’s Edge from animal impound, she was originally adopted a little less than a year later, only to be returned a few months after that—brought back because she did not get along well with other cat in the house.

Lisa Pumper, the Animal Care Coordinator at Prairie’s Edge, described Alicia’s personality as akin to a ‘crabby old lady’—even though Alicia herself is six years old, still relatively young, she is the shelter’s current curmudgeon in residence.

Pumper added that Alicia is the kind of cat one would think of when they picture the stereotypical cat—independent, and only really wanting attention or affection on her terms.

Like Johnny, Alicia roams freely for a bulk of the day at the shelter, confidently strolling around, occasionally squawking for attention. She can most commonly be found asleep on Pumper’s desk—usually on top of a file, or some other paperwork.

Bert has been at the shelter for about as long as I’ve been involved with Prairie’s Edge—like Alicia, he too is stray from animal impound, arriving at the shelter on February 13th, 2017.

A big ball of floofy white and black fur, Bert is also very handsome—he, too, can be mischievous, though less so when compared to Johnny. The best way to describe Bert, and his slightly crooked smile, is that he is ‘wacky.’ 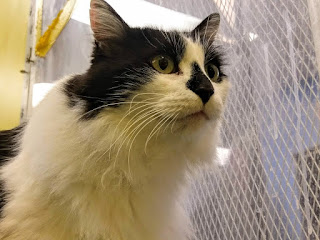 In my experiences with Bert—or Bertie, as I have taken to calling him—I’ve found he plays too hard. He is well meaning, but he gets worked up very easily, and is a little on the bitey side. They aren’t malicious or angry bites—but they are bites never the less.

With Bert, Pumper explained it is best for people to interact with him before the shelter gets too busy during business hours—when there’s too much commotion in the building, he can become stressed out.

Both Pumper and Jasnoch agree Bert is among the most intelligent cats at the shelter; I, too, would agree. Recognizing when his name is called, Bert also is very accommodating about understanding when it’s time to hop back into his kennel after it’s been cleaned.

During my conversation with Jasnoch and Pumper, Bert even seemed to know we were talking about him—as my tape recorder was rolling for the interview, he waddled into Jasnoch’s office, greeted us with his unique meow, then hopped up into my lap and hunkered down—something he’d never done before.

When I volunteer at the shelter, I do my best to take charming photos with the cats I’ve spent time with, to later share via social media—simply saying, with each weekly batch of photos, that my cat friends are ‘all very good.’

If that is the case though, then why are some of them perpetually overlooked for adoption?

Pumper agrees that Alicia, Johnny, and Bert are good cats—but concedes they may be looked over because of their age; Johnny is five, and Bert is around nine.

“They may also be looked over because of how long they’ve been here,” she continued. “I think people that frequent the shelter now just presume they are the shelter’s cats. And I think as staff—sometimes we forget they are here.”

Jasnoch felt similarly, adding with a cat such as Johnny, who is out wandering around during business hours, potential adopters may come in and think he’s not available.

“I would miss him,” Jasnoch reflected on the idea of Johnny finding a forever home. “But he doesn’t need to live here forever.” She added despite the fact that they are self-described ‘buds,’ she’s unable to take him home—she lives with two dogs, and is uncertain how they’d respond to a cat entering their territory.

“I’ve never taken Johnny and said to someone ‘Here’s a great cat,’” she concluded. “So maybe there is a part of me that really doesn’t want to not have him here.”

Shortly after I started writing this piece, Bert was taken in as a foster—on October 20th, he was officially adopted into a ‘forever family’; Alicia and Johnny are both still available for adoption. For more information on them, or any of the other ‘very good cats’ available at Prairie’s Edge Humane Society, please visit pehs.org
Labels: animals cats companion animal personal essays poorly written thinkpiece prairie's edge humane society shelter cats the wagazine