Album Review: Failure - In The Future, Your Body Will Be The Furthest Thing From Your Mind 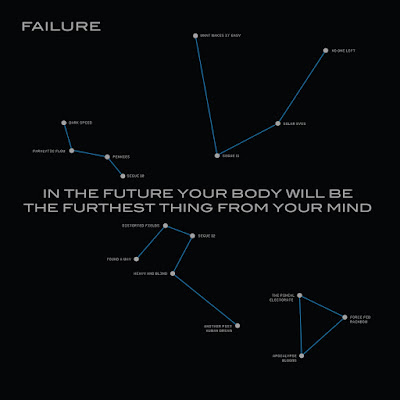 I saw a joke on Twitter the other day that began with “Why is 2018 so fucking long?’

The tweet in question then went on to list a handful of pop culture references that occurred this year including the “Rick and Morty”-inspired Szechuan Sauce at McDonald’s, and the Netflix original Anime series “Devilman Crybaby.”

“JFK was assassinated this year,” the joke continues. “Black Panther came out this year.”

This has been an unbearably long and unforgiving year—but the good news is…it’s almost over.

When the reunited, pioneering space rock trio Failure began releasing portions of their yet to be titled and uncompleted fifth full length in late March 2018, just to put things into perspective on just how long this fucking year has been, my companion rabbit Annabell was still alive.

I have specific, and sad memories based around trying to listen to the first segment of the album, released as a four song EP titled In The Future, at the beginning of April—trying to listen, and trying to write down my thoughts on the four songs included, as well as the (at the time) difficult to follow release strategy behind it.

I have these memories, and they all involve my attention being elsewhere—on something much more important, because during this time, Annabell had become gravely ill, and would pass away on May 29th.

The second installment of this album, Your Body Will Be, had arrived four days prior to that; the third, The Furthest Thing, coming after a bit of a delay, in September.

The year—marred by tragedy, grief, depression, and a deafening silence—isn’t over quite yet and I am still writing about the band Failure, who have now finally completed the circle by releasing the last collection of four songs—and thus, concluded their fifth album: In the Future, Your Body Will Be The Furthest Thing From Your Mind, a sprawling set of 13 songs accompanied by three instrumentals.

I have had my misgivings about both some of the previously issued material from this album—tracks from the first EP being, still, the least strong when compared to the others—as well as the strategy behind this process, and the mostly botched execution of it.

Now that In The Future can be listened to as a whole—as it was more or less intended to be—what becomes clear is the band didn’t so much save the ‘best’ for last, but they saved some of their most ambitious and interesting material for the effort’s final four tracks.

The album’s final act opens with the pensive, acoustic guitar-led “Another Post Human Dream”—sweeping and grand in its scope, there’s really nothing else quite like it on the record. It finds the band dropping the searing, dissonant edge of the electric guitar and the snarling, distorted fuzz of the bass—and in doing so, not that they really weren’t, but it makes the band slightly more approachable.

That approachability is also aided by the song’s lyrics. Failure famously bury a song’s actual intent, or meaning, amid fragmented imagery and stark metaphors—I mean, Fantastic Planet, more or less, is an album that uses symbolism of something like ‘space madness’ to veil lyrics about drug abuse and alienation.

In a recent interview regarding the roll out of this album, and the writing and recording process, the band’s vocalist (and de facto frontman) Ken Andrews said that In The Future contains some of the band’s most personal songwriting—adding he was going through a divorce from his wife of well over a decade, singer Charlotte Martin.

Knowing that bit of information, it’s maybe too easy to read a little too much into “Another Post Human Dream”’s lyrics—it opens with Andrews’ voice barely rising above a hoarse whisper: “I never believed that we could sink this way.” Then, later, as the song slowly unfolds itself, “Remember all the blue—It’s been a long time since I missed you.”

The song itself is moderately self-aware, or self-referential—as much as a band like this can be self-aware and self-referential. It opens with a warbled oscillating sound that is slightly reminiscent of the noise that opens “Another Space Song,” pulled from Fantastic Planet. The two songs also, of course, share similarities in title—“Another Space Song” used the heavy metaphor and strong imagery of space travel and loneliness to describe a longing for someone; here, there is still that loneliness, and longing, but it arrives steeped in a reflective sadness, and possibly regret.

It’s a gorgeous song, no matter what it’s actually about—placing itself among the band’s finest work.

Among the band’s most surprising accomplishments, across their entire canon thus far, is In The Future’s closing track—“The Pineal Electorate,” the kind of song that Failure, as a band, only showed small hints of in the past—specifically on the dreamy, piano driven “Mulholland Drive,” from The Heart is A Monster. However, it’s the kind of thing that multi-instrumentalist and the band’s co-songwriter (alongside Ken Andrews) Greg Edwards has tapped into before occasionally within his work in his other band Autolux, as well as in his involvement with the one-off Los Angeles psychedelic pop outfit, Lusk, and their only album Free Mars.

One of the very rare times when Edwards sings lead, “Pineal Electorate” is built around his smooth yet spidery voice, and the jaunty, Beatle-esque piano chords he plunks out, while Andrews (presumably) handles the fuzzed out bass, which, for the first 90 seconds of the song, give or take, is panned all the way onto right channel, while the band’s powerhouse drummer, Kellii Scott, is panned to the left. I would never consider a ‘big rock record’ like In The Future to be a ‘headphone album,’ but it’s a meticulous and wondrous production detail like this that almost makes for mandatory listening with a semi-descent pair of headphones, at least once, just so you can feel the way the song is mixed with the rhythm section split up like that, while Edwards’ voice and piano remains centered.

Everything then collides at around the two-minute mark, ushering in a small refrain to the song’s incredibly fragmented, psychedelic lyrics, as well as a blistering, trademark Failure sounding guitar solo, and a low undercurrent of strings.

“Pineal” becomes even more kaleidoscopic as it tumbles into a dissonant, cacophonic, and abrupt conclusion.

Eight months after hearing the first four tracks from In The Future, Your Body Will Be The Furthest Thing From Your Mind—and now having sat with the album as a whole, it seems to arrive, much like portions of The Heart is A Monster did, as a band that is grappling with the give and take of a specific aesthetic, over pop songwriting.

There are moments when one triumphs over the other—take the opening track, “Dark Speed,” which is probably one of my least favorite of the bunch, however, it is probably one of the most infectiously written—specifically when the band arrives at the song’s refrain. The same can be said for songs like “Paralytic Flow,” “Solar Eyes,” and “Found A Way,” among others. It’s not that the band strays drastically from its trademark sound—not at all; however, these songs in particular have a stronger emphasis on huge, memorable hooks, as opposed to crafting a dense sonic atmosphere.

So while the cutting and ramshackle edge the band achieved on Magnified and especially on Fantastic Planet are more or less things of the past, it’s not like Failure has ‘gotten soft’ as they have grown up and returned as a band. A record like In The Future is still a ‘rock’ record at its core, but it’s a million times more intelligent and well made than anything else that falls into this genre.

With the band favoring more pop oriented songwriting, there are still moments where the atmosphere, or the band’s iconic aesthetic, is the emphasis—the instrumental “Segue” tracks are clear examples of that, as well as the revised version of “Pennies”—a dreamy, slow burning song that dates back to the very, very early days of the band, and was originally included on the 2004 rarities collection Golden; and the aforementioned “Another Post Human Dream,” and “The Pineal Electorate” are outstanding illustrations as well.

There are also times where Failure manages to find that balance—where a song is catchy, or infectious, yes, but the band also manages not to forsake any of their sound in order to achieve it—“Distorted Fields,” pulled after the halfway point of the record, is the first instance where both the ‘art’ and ‘rock’ in ‘art rock’ collide. It has a memorable refrain, but sonar blip-esque ripples of guitar feedback also anchor that refrain down; “Apocalypse Blooms” and “Force Fed Rainbow,” both of which arrive in the album’s final act, also find the band creating that delicate balance with successful results.

Sometimes I am still in a minor state of surprise that I can say things like, “I am writing a review of the new Failure album” in 2018, give the fact that 20 years ago, I was a fat, sad teenager, sitting in my bedroom, getting lost within the soundscape of Fantastic Planet, only to discover, thanks to the crude dial-up internet we had, that the band had already broken up by the time I had really gotten into that record.

But now I am thin and beautiful, but still sad, and that visceral catharsis I found so long ago may not be the band’s current model, but there are still echoes of it reverberating out through Greg Edward, Kellii Scott, and Ken Andrews as they perform today, because Failure is a band where a number of things converge.

It’s where a metal head and someone who thinks OK Computer is the greatest album of all time may be able to find common ground; and it’s the place where you can both blast a record like In The Future, Your Body Will Be The Furthest Thing From Your Mind on your stereo, but you can also identify and enjoy the attention to detail within from the confines of headphones.