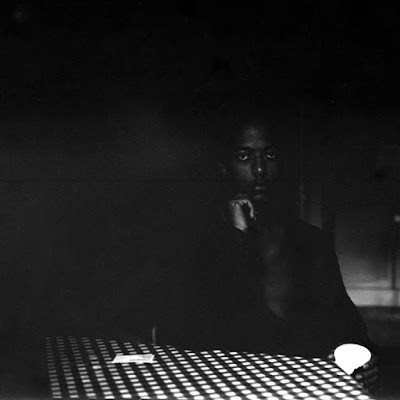 Imagine a world where Tricky’s Pre-Millennium Tension was considered the most important, and influential album of all time—with both Burial’s self-titled debut, and its follow up, Untrue, close behind it.

This kind of world is where Jack Richardson thrives, which he does throughout his auspicious debut full-length under the moniker Manonmars.

Richardson, much like the music he performs over, is more or less cloaked in shadow. A member of the UK-based collective Young Echo, he first came to attention MCing on the group’s radio program six years ago; most recently, he contributed vocals to the collective’s self-titled double album, released earlier in 2018. Now, with atmospheric beats and soundscapes created by the production duo O$VMV$M, it is more or less Richardson’s time for the spotlight—though, a spotlight is something that could never penetrate just how murky and claustrophobic the production of Manonmars is, and ‘light’ itself is really nowhere to be found on this album.

You realize the fatal flaw of Manonmars almost right away—it’s entirely too short. But maybe that’s intentional on the part of everybody involved in the album’s creation. Would you rather be left wanting more—devastated by the album’s brevity, quickly hitting the play button again to cue it back up from the beginning; or, would you rather be left with too much of something, eventually spreading itself too thin, ending up in diminishing returns after a certain point?

Arriving at a concise half-hour running time, Manonmars is 14 tracks, four of which are instrumentals. The instrumental tracks in question- “Blood,” “Planet,” “Weird Girl,” and “Symbols,” are all moody and evocative in their own respective ways—with three out of the four, I would go so far as to call them gorgeous. They provide a brief respite from the rest of the album. The minute long introductory track to the album, “Blood,” fades in slowly, and is punctuated by clattering noises and a low and mournful synthesizer pattern; “Planet,” is perhaps the most hopeful sounding piece on the record, or at least the most curious—built around a swirling, twinkling keyboard loop, with additional atmospherics coasting along the perimeter, it creates a world that is both bittersweet and full of wonder; the closing piece, “Symbols,” sounds like it is being broadcast from some kind of dystopian, Blade Runner-esque future—covered in reverb, the warbled, broken down sounding synthesizer strains arrive sounding cavernous, distant, and cold.

“Weird Girl” is the only instrumental included on Manofmars that is not as impactful—less than a minute in length, it’s the most dissonant, and winds up being exponentially less evocative in nature.

As a performer, Richardson’s delivery may not be for everybody—it isn’t an ‘acquired taste,’ but it’s a relatively sharp contrast when juxtaposed against American rap artists. Once you can get through his very thick, working class English accent, you begin to notice his emphasis on dry, deadpan humor—not even batting an eyelash or doing a little more to draw attention to a punch line or something extra clever in his lyrics. Everything arrives on Richardson’s time—the word ‘deliberate’ doesn’t do justice to his precise use of timing and language. His flow on the microphone….it is slow. Very slow. At times it sounds like someone just woke him up from a nap, and asked him to spit a few bars while he was still half asleep; or that he’s just not very enthusiastic about his chosen profession as a rapper.

When I still wrote for the newspaper, there was a time when I was chastised by one of my editors for using the word ‘unique.’ I think it was within a quote from somebody I interviewed—but I was lectured on how it’s a word to use only when something is actually unique; meaning, there is, really, nothing else like it.

I would go so far as to say that Manonmars is one of the most unique albums I’ve heard in a very long time—let alone this year.

Richardson wastes absolutely no time displaying just how clever of a lyricist he is—as a slow motion, spooky sounding beat unfolds behind him, the second line of “Luv” finds him saying, “Developing this image like I know InDesign,” then, shortly after that, references both The Roots, and their iconic drummer Questlove.

Later, on “Milk,” Richardson’s energy level picks up slightly—opening the track by saying, “As I kiss the sky, Manonmars like you missed a guy,” which, for some reason, is one of the album’s most memorable lyrics—maybe it’s with the reserved confidence and minor smirk with which he delivers it. Then, before the song ends in a mantra of “Grinding till my posthumous is harder than my previously released plans,” he makes the most surprising pop culture reference on the record, shouting out Doug Quaid—the protagonist from Total Recall, as well as the three-breasted woman from the original 1990 version of the film starring Arnold Schwarzenegger.

As Manonmars reaches its second half and begins its descent toward the conclusion, Richardson’s rapping, at times, becomes a little more urgent sounding—“hit them with the special moves,” he deadpans, though a little faster than he may have on the first half of the record, on “Getaway,” before bringing things back down to a more restrained delivery on the closing tracks like “Never” and “Devil Dro.”

One of the things that makes Manonmars such a compelling listen, and Richardson such a fascinating performer, is the immediacy with which this record grips you; there’s no need to warm up to it, or wait for it to become a ‘grower.’ All of its impact hits you right away, urging you to listen again, and again—something that provides you with the opportunity to begin unpacking just how clever Richardson is as a writer and MC, as well as how impressive and dark the production from O$VMV$M (Sam Barrett and Amos Childs) is—something that there are hints of in their trilogy of eponymous albums, though here, they’ve really come into their own, or were just saving the best beats for someone other than themselves.

Even though the pacing slows a little from time to time, Manonmars is an exhilarating listen that makes experimentalism accessible, and practically breathes brilliant new life into a genre that so often becomes stale and boring from an oversaturated market and lack of creativity. Because of its brevity, it seems like it’s over before it even really started, but as Richardson asks us to do on the track “Never,” “…pretend this shit’s eternal.” Given a 30 minute window, it creates a tangible, evocative world all of its own, pulling you in without hesitation—it’s unsettling at times, yes, but Richardson, Barrett, and Childs have constructed a place which one never really wants to leave.

Manonmars is out now as a digital download via Young Echo; the vinyl is out in the UK, and will arrive stateside on November 30th.