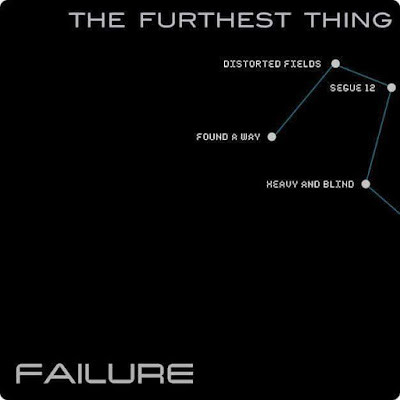 Failure are three EPs into the intentionally slow and fragmented release of their as yet untitled fifth full-length effort, and I still have no idea what is going on—between the band’s sketchily operated merchandise store, its Pledge Music site, and various interviews with the band themselves, the waters are still incredibly muddied.

Either way, Failure have returned with the third effort in this series of releases—The Furthest Thing, another collection of four tracks containing three songs, and an obligatory instrumental piece. Taken within the context of its two predecessors—In The Future, and Your Body Will Be (as I think it’s intended to be taken), it finds the group continuing to stabilize the balance between ‘modern alternative rock’ and the classic space-rock sound that the band pioneered in 1994 and 1996—making for a more cohesive sounding and enjoyable listening experience.

While the fan favorite unreleased track “Pennies” found its way onto the first of these EPs, In The Future saw the band stumbling, I think, to find that place where modern times and the times that their sound originated could meet, and they were able, for most part, to regain composure with the subsequent release of Your Body Will Be.

Quite a bit of time has passed since Your Body Will Be was released in May—it’s been a long summer, and while I didn’t necessarily forget that Failure were in the middle of this project, the arrival of The Furthest Thing took me by surprise.

The EP opens with a shot of alternative rock bombast—“Found A Way” finds the band focusing less on moody atmospherics and cryptic, fragmented lyrics, and more on something infectious and structured around a big, sing-a-long hook—with vocalist, multi-instrumentalist, and de facto frontman Ken Andrews howling away during the song’s refrain (his voice sounds great here, by the way), and the band’s drummer, Kellii Scott, absolutely pummeling away at his kit.

The Furthest Thing really starts to find its way on the second track, “Distorted Fields,” which is powered by a scuzzed out and snarling bass line—a long standing trademark of the band. It, too, is based around a very large sounding refrain, though here, the band really ups the dissonance throughout, creating some rather memorable sonic textures.

Ken Andrews and Greg Edwards often switch off between guitar and bass when performing live, so on studio recordings, I’m uncertain as to who is playing what, and when, At times, you can try to guess based on the sound, and the style, though whoever takes guitar duties on “Distorted Fields” really outdoes themselves with some of this stuff—like the sonar blip feedback burst that shakes out during the song’s refrain, and the searing, distended solo that harkens back to the band’s darkest work on Fantastic Planet, arriving shortly before the two minute mark.

The EP’s obligatory instrumental break—the 12th “Segue” track in the series that began in 1996, is among their most reserved—at two and a half minutes, a sequence of sustained, contemplative tones give way to minor waves of discord in an effort to build the tension as The Furthest Thing slides into its final track, and the strongest among the set—“Heavy and Blind.”

Opening with a rather downcast progression of chord strums and a frenetically pounded out rhythm by Scott, Andrews and Edwards find the balance between a gloomy rock sound and something bombastic in scope, all while managing to work in some of the band’s rarely used dreamy, swooning capabilities. Crammed into just over four minutes, if finds Andrews overlapping his vocals over hushed wordless singing in the background, with the song finally exploding in a burst of gorgeous, hazy cacophony as it concludes.

I have absolutely no idea what happens next—only Failure do, and working without a label, and releasing this music on their own and on their own timeline, it is uncertain as to when the next EP or conclusion of this ‘album’ will arrive. The Furthest Thing continues to show a promising sound, overall, for this fifth full-length, and if anything, it’s another snapshot of a band exploring innovation—both musically, as well as the way that music is delivered.

The Furthest Thing is available now as a stand alone download, as well as part of various bundles to purchase.