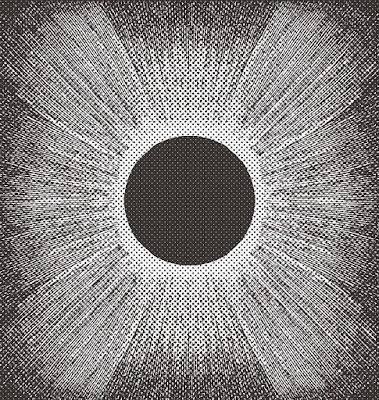 In way, you could say that I’m having a bit of a difficult time keeping up with Andrew Hargreaves’ output as of late.

As the man’s prolific streak continues—arriving, like, two months after a ‘solo’ deconstruction of pop music, The Ambushed Semiotic, as well as Before The Light, the Tape Loop Orchestra collection he released in the spring—Hargreaves has returned with yet another T.L.O effort—Return to The Light.

Return follows the aesthetic that Hargreaves began exploring last year with the release of the sprawling triple album boxed set Solar Light Emissions; both Before The Light and Return to The Light feature similar sleeve artwork, as well as album titles that stick with the theme, or idea, of ‘light.’

Like its predecessors, Return to The Light is structured around three unique compositions—two of which, “Outer Light,” and “Inner Voice,” are each pressed onto a side of vinyl, while the third piece, “Transcendental Voices,” is housed in the compact disc included in this lavishly assembled set.

With the Tape Loop Orchestra project, it’s been fascinating to watch how Hargreaves’ composition style has shifted over the course of the last six or seven years—at least since the release of his masterful In A Lonely Place, the record that served as my introduction to his work. No longer sticking with one sound, or tone, through the duration of a composition, there are now dramatic shifts that can either relieve, or create more, tension as the piece unfolds around you. While the pieces from In A Lonely Place, or the one-off single, Yesterday, This Would Have Meant So Much To Us, found Hargreaves set on evoking strong emotional—often sad—reactions through the music, his latter day work, Return to The Light included, finds him slightly less focused on making the listener sad, or melancholic, and is slightly more focused on crafting an underlying sense of dread, or at the very least, casting a long, long shadow over you while the record spins.

Both of the selections included on the vinyl—“Outer Light” and “Inner Voice”—begin rather ominously, though “Inner Voice,” possibly the album’s de facto first side, moves away from that rather quickly, embracing a sweeping, haunting string progression, as well as the sound of something—an additional atmospheric, we’ll call it—that hangs in the air, quietly, though gradually getting louder as the piece progresses, and mournfully.

Throughout the rest of the track’s 15-minute and change running time, Hargreaves walks an incredibly delicate line between the unnerving and the somber, while he works to create a natural sense of give and take between the two feelings.

Like many pieces in the Tape Loop Orchestra canon, both “Inner Voice” and “Outer Light” are based around multiple movements, or sections; in most cases, it is relatively clear where one portion is coming to an end, and something else is beginning. As “Inner Voice” approaches six minutes in, the original layers begin to decay, and the piece slowly begins a shift into a progression of ethereal, disembodied vocals, stretched out and manipulated to sound extraordinarily haunted and mournful—though, as it inches into its resolution, sounds less haunting, and just, like, way more mournful.

For a piece called “Outer Light,” Hargreaves seems to go out of his way to leave it cloaked in shadow; it opens with a stark, low churn and rumble, before it slowly makes its way out of that—about five minutes in—easing itself into some icy, glacially paced strings, with a mild cacophony of disembodied voices swirling around, serving as a means to usher in the piece’s second movement; then, later, as “Outer Light” moves toward its conclusion, Hargreaves keeps it on that fine line—it can be a little somber or pensive, sure, but it also creates an unsettling tension he manages to ride out until the end.

The companion to Return to The Light, the compact disc featuring “Transcendental Voices,” is something else entirely.

A massive 40-minute undertaking, it begins with a low, dreadful rumble, punctuated by sharp slices of a dissonant high pitch—the kind of thing you’d expect to hear in space if, like, space madness is about to overtake you.

That kind of feeling runs through the first five minutes or so, then Hargreaves shifts things into a different place, as actual warbled looping sounds give way to an intense, dramatic rushing sensation that, underscored by slow and deliberate strings, is quite gorgeous, but also overwhelming to the listener; there’s just a lot going on at once.

“Transcendental Voice” is structured so that it shifts into a new direction or movement roughly every five minutes—following that dramatic rushing, it pushes elsewhere—in similar, but slightly different, territory. The thing that these moments have in common is that there’s a loneliness to them. I’m not sure if that’s intentional or not on the part of Hargreaves, but subsequent movements have this kind of feeling cast over them of pensive solitude—the kind of thing you’d expect to hear in space, if, like, you’re just traveling in space by yourself and space madness has yet to set in.

With each release under the Tape Loop Orchestra moniker, Hargreaves continues to astound with his seemingly never-ending imagination when it comes to soundscapes and composition. A bulk of his canon, especially within the last two to three years, is marked in an indescribable way that makes it very ‘Tape Loop Orchestra’ when you hear it, but these pieces are all unique in such a way that he never repeats himself, or his ideas; I’ve never once thought ‘this all sounds the same,’ even though there are similarities.  It’s a fascinating juxtaposition of the familiar with the unfamiliar—Return to The Light is an innovative listening experience full of surprises; even when Hargreaves is not emotionally visceral, his work, as shown here, continues to affect.

Like every other Tape Loop Orchestra release, Return to The Light was a limited edition LP; it has since sold out from Hargreaves himself, as well as from Boomkat. However, you may purchase a copy at a higher price from Discogs.
Labels: album review ambient andrew hargreaves drone experimental new album new review orchestral tape loop artist tape loop orchestra weird