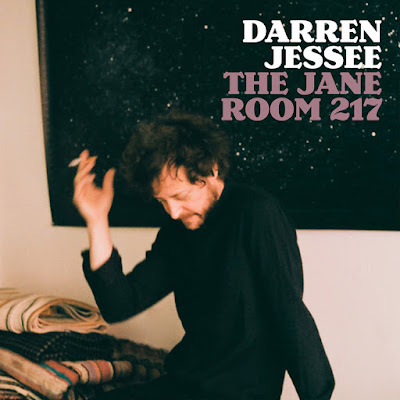 Talking about Darren Jessee’s The Jane, Room 217 requires a small amount of explanation, or set up, as it were—specifically to discuss what the difference between this, Jessee’s ‘first’ solo album, is, when compared to his output as Hotel Lights—the name he’s been releasing music under since 2004.

While Hotel Lights can be called a ‘solo’ project for Jessee following the break up of Ben Folds Five (he served as the band’s drummer and co-wrote “Brick,” just in case you were not aware), Hotel Lights has always sounded like the work of more than just one person—it sounded like a full band, mostly because it was; or, at least, it was Jessee fronting a revolving group of collaborators providing additional instrumentation—with the one constant, outside of Jessee, being producer and multi-instrumentalist Alan Weatherhead.

In the press materials for The Jane, Room 2017, Jessee concedes that he felt like he needed a band because he found confidence from working within a group; however, he also said he wanted to find the courage to be a ‘solo troubadour.’

Recorded in his apartment in New York, The Jane is an incredibly sparse collection of nine songs that, true to his wishes, find Jessee in full on ‘troubadour’ mode—it’s an incredibly fragile and melancholic set of tunes that, even though they are almost threadbare in presentation, are still incredibly rich due to the evocative imagery of Jessee’s lyricism, something that has been a trademark of his solo output since the self-titled Hotel Lights album was released almost 15 years ago.

The songs found on The Jane walk the line between love songs and somber, pensive reflections—a balancing act that, much like his use of language and imagery, he’s perfected throughout his body of work. However, here, because the songs are so sparsely arranged, those sentiments—both of love and a sadness one can’t seem to shake—seem magnified.

The Jane, Room 217 begins with a question—“What are you up to tonight?” Jessee asks on the album’s opening track, “Anything You Need,” before weaving fragmented imagery of “summer girls, reading books, in sheer dresses,” and explains to the object of his affection that “The vibe’s gonna be: you and me, anything you need.” There’s a fast reversal, however, two songs later, on “Letting You Go”—“I always knew I was your mistake,” he laments in a higher range that sounds like it’s on the verge of breaking. ‘Look at you go—letting you go is trying. Look at us now. Look at us now, we’re dying.”

The nine songs that make up The Jane, Room 217 are primarily comprised of skeletal elements—Jessee’s whispery thin voice, plaintive acoustic guitar strums, and the occasional overdubbed piano; however, as the songs from The Jane were recorded with the intention of being demos for another Hotel Lights record, Jessee eventually realized that the songs were able to stand on their own with little, if anything at all, added to them.

Mixed by Weatherhead, the only real additions included are that of the lush string arrangements courtesy of Trey Pollard—an extra layer that gives a number of songs from The Jane a palpable warmth; it’s apparent on “Dying Violins,” the final song on the album’s first side, and one of the real stand out tracks among the set. Not only does Jessee tap into vivid imagery with the repeated phrase, “We were drunk from dying violins,” but also the song itself, as a whole, swirls and swoons thanks to the emotionally evocative string arrangements.

Even with these minimal arrangements, there are moments throughout The Jane where you can hear, or at least imagine, what a song could become if it had been developed further into a Hotel Lights track—the album’s second track, “True Blue” is structured in this way, as is the slow shuffling “Ruins,” the opening track from the second side.

In a rather Darren Jessee fashion, The Jane, Room 217 ends with a trio of dramatic, ultimately cathartic songs. And here’s the thing—here’s why, in whatever form—writing for Hotel Lights, or with this set of ‘solo’ turns—why Jessee is such an important (if not criminally underrated) modern songwriter: he’s not just writing songs. He’s creating these fragments and moments set to music.

He’s been doing it all this time—right from the very beginning of that self-titled Hotel Lights album, and now here we are, nearly 15 years later on, and he’s still able to take you, as a listener, someplace. These moments created on The Jane are transformative. They are not of a specific time or place, but they can create a time and place through the use of tone and imagery. As The Jane, Room 217 begins its final descent, when Jessee describes a ‘chill through the window screen,’ and the subsequent sunrise across a face, on the gorgeous, redolent, contemplative “All But A Dream,” he wants you to feel that chill, juxtaposed with the warmth of a rising sun, and be put in that moment with him.

When he describes a piece of litter cast aside on “Plastic Bag,” and builds up the histrionic tension between piano chords and sweeping string accompaniment, you’re right there with him, watching as the dissolution of a relationship unfolds in front of you; and on the album’s final moment, “Go On Baby, Break Down,” you breath a sigh of relief as he sings, “let the healing begin.”

I’ve always looked at Hotel Lights, or the music of Darren Jessee, as it were, as ‘autumn music.’ Specifically, the self-titled Hotel Lights album, which is one of my go-to ‘fall into winter’ albums every year; so, as summer fades, the leaves begin to turn, a slight chill fills the air, and the year slides into autumn, it’s fitting that The Jane, Room 217 is a near perfect soundtrack for this transitional time. An experiment for Jessee in terms of his confidence—both for his songwriting as well as himself—he’s created a collection that lingers like a bittersweet memory, long after the record has ceased spinning.


The Jane, Room 217 is out now on vinyl, via Bar None Records. Please be aware that the vinyl does not include a coupon to download the record; it is available to download via the iTunes store.
Labels: acoustic album review. ben folds five darren jessee folk hotel lights melancholic new album new music new review singer/songwriter the jane room 217