These Little Things Can Pull You Under - R.E.M.'s 'Automatic For The People' turns 25 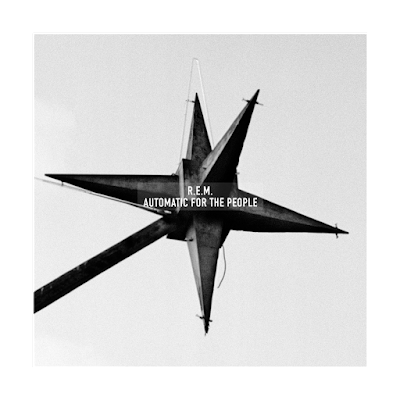 For the last, like, 12 years, my wife and I have had this joke that when we listen to Automatic For The People, during “The Sidewinder Sleeps Tonite” (easily the album’s worst/weakest song), we yell “Bumbaway Jamaica,” or sometimes “Bumblebee Jamaica,” since that’s what it sounds like Michael Stipe is shouting in the song’s refrain.

It was only recently—like, a few days ago, when I mentioned that I had to write a 25th anniversary thing about the album—that my wife thought to look up what the actual lyrics were. Turns out that it’s not “Bumbaway Jamaica” at all. It’s also commonly misheard as “Calling Jamaica,” but it’s not that either. It turns out the lyric is, “Call me when you try to wake her.”

If 1991’s Out of Time was a ‘transitional’ album for R.E.M.—moving from college rock heroes toward something much bigger and more thoughtful than that—Automatic For The People, released, like, 18 months after its predecessor, is, at least for the time being, the end result of that transition, and something they could never quite get back to.

There’s so much history and backstory to Automatic, it’s tough to know where to begin—following promotional duties for Out of Time, the band (minus Michael Stipe) began working on demos for the album, with the intent of making a ‘rock’ record, something they would eventually circle back around to with 1994’s Monster. Automatic isn’t a ‘rock’ record—far from it, actually. It’s slow, and sad, and most of the songs are based around acoustic instrumentation, however, it is so much more focused and full of intent when compared to the seemingly directionless or at least unfocused Out of Time; it’s easy to see why it’s become such an iconic and important record for the band.

Recorded in late 1991 and throughout the first part of 1992, there’s a palpable political tension in parts of Automatic For The People—all leading up to the 1992 Presidential Election. The most overtly political song is the slow burning, cavernous opening track, “Drive,” a song about the band’s support the National Voter Registration Act, as well as Stipe’s well documental disdain for George H.W. Bush—“Smack, crack, Bushwacked,” he mumbles in a low voice as the album’s first line.

Just as “Losing My Religion” was an unlikely success and unlikely single for the band the year before, Automatic For The People is also full of unlikely singles—songs that would go on to be some of the band’s most popular. “Drive” was released as the album’s first single, mere days before the record was released—it was followed a month later by “Man on The Moon,” which is still, 25 years after the fact, one of R.E.M.’s finest moments, blending Stipe’s evocative lyrics involving historical figures and fragmented imagery with a very downcast sounding music—all while still managing to make it accessible as a ‘pop song.’

I was around nine years old when Automatic For The People came out—so even though I was aware of contemporary popular music thanks to how much time I spent watching MTV—nine was too young for me to be aware of release dates. I’m not sure I was even aware that “Man on The Moon” was a single off of the record. It was “Everybody Hurts” that caught my attention—specifically the song’s legendary music video. I can recall seeing it for the first time and it stopping me in my tracks, even as a kid. I went as far to call my mom into the living room and have her watch it too. My mother bought the CD for Automatic For The People in 19931—complete with the yellow disc tray as part of the jewel case.

A glacially paced song like “Everybody Hurts” seems like an unlikely candidate for a hit single, but it, as well as its accompanying video, struck a chord at the time. The song’s subject matter and arrangements also are a far cry from the jangle pop of the band’s earliest material, as well as whimsical ditties like “Stand” or “Shiny Happy People.” “Everybody Hurts” is serious—like, really fucking serious. A bulk of Automatic For The People is though. It’s a dark record (a meditation on death and mortality at times) dressed up to be accessible or at least still listenable without being too depressive by the arrangements and instrumentation chosen. Even the album’s most serious moment, “Sweetness Follows,” is not a complete downer thanks in part to how it just soars at times.

Also, the inclusion of the aforementioned “Sidewinder Sleeps Tonite” was, apparently, done to lighten the mood. I mean, you can kind of tell since, thematically, it sticks out pretty badly, and is the worst song, by far, on the record.

The album’s penultimate track is also an unlikely candidate for a single, or at least an enduring song—“Nightswimming,” a sparse ballad featuring just bassist Mike Mills on the piano with Stipe’s bittersweet and plaintive vocals on top of it, joined by an oboe (again, what an interesting thing to include in a pop song) and it is just one of many tracks on the record featuring string arrangements by, of all people, Led Zepplin bassist John Paul Jones.

Automatic For The People is, like, peak R.E.M—or at least peak major label R.E.M. More confident than they were on Out of Time and already a household name at this point thanks to MTV, this represents a time for the band when they were aware of their celebrity but they hadn’t succumb to the anxieties that come along with it—that’d come two years later on Monster.

A bulk of the Pitchfork review of the 25th anniversary reissue of Automatic For The People s spent discussing the mythology of the record, and very little time talking about the remastering job of the album, the live record recorded at a hometown show at the 40 Watt Club, or the ephemeral disc of demo recordings—and I’m almost 900 words into this and let’s face it, my review is doing the very same thing. Why I even bring up the Pitchfork review is that writer Stuart Berman talks a lot about Michael Stipe losing his hair—something that signified the anxiety of being this famous was getting to him, as well as adding fuel to the rumors about his overall health.

While last year’s Out of Time reissue included a second disc of demo recordings, Automatic For The People’s 25th anniversary edition includes both a live album as well as the demo recordings.

There are a whopping 20 demos included on this collection, and they run the spectrum of being very, very close to the finished song, or being very rough sketches, sometimes without lyrics. For a passing R.E.M. fan, sure it may be interesting to hear rough, early version of “Everybody Hurts” (here as “Michael’s Organ”) or “Drive” (complete with Bill Berry’s seemingly unsure drumming), but a collection like this is for the diehard R.E.M. fan who needs to hear a ramshackle demo of “Sidewinder,” here titled “Wake Her Up,” including Stipe not even bothering to hit certain notes, and audibly laughing at one point.

The live album was recorded as part of a Greenpeace initiative to promote solar energy, and taped very shortly after Bill Clinton’s 1992 Presidential victory, the band sound great, walking some kind of line between sounding huge and tight but playing it very loose. Stipe opens up the set by warning the audience how unrehearsed they are—and it seems worth mentioning that R.E.M. went for a very long time without touring to support any records—not hitting the road properly until 1994. Opening with a hard and heavy version of “Drive,” they play four songs off of Automatic before dipping into hits from Out of Time and Life’s Rich Pagent. They also end the show with two covers—The Troggs’ “Love is All Around,” which one can’t laugh at now in a post-Love Actually world, and Iggy Pop’s “Funtime”—not exactly a miscast cover, but also not exactly what you’d expect from R.E.M.

As for the album itself? Truthfully, I can’t tell much of a difference between the original 1992 edition and this reissue. It maybe seems a little bit louder—maybe? But overall, there is nothing drastically different, so if you were going into this expecting to hear some kind of new depth or additional layers in the album, you may be disappointed. I mean, in general, Automatic For The People hasn’t aged terribly—you can tell, at times, that it’s a product of the early 1990s, but the production doesn’t sound dated, which is a pretty impressive accomplishment. So maybe the band didn’t think this needed to be updated at all.

I remember reading a quote from Thurston Moore a very long time ago that said something to the effect of, “If we (Sonic Youth) would have broken up after Dirty, we would have made so much money.” R.E.M. is not the kind of band that would have benefitted from calling it a day on such a landmark release, but if we’re being honest, it was kind of downhill from this point. They broke up temporarily while trying to record Monster, in fact, but at least temporarily, worked through the tensions to see it through.

Monster, despite being a record I actually hold pretty dear for some reason2, upon release, was a little maligned and possibly a little misunderstood. Its follow-up, New Adventures in Hi-Fi found the band navigating a different landscape when it came to ‘alternative rock’ and contemporary popular music. Sure it received good reviews but it wasn’t milked for singles the way Automatic For The People and Monster had been. By 1997, drummer Bill Berry left the band, and Stipe, Peter Buck, and Mike Mills trudged on without him, rather than fading away gracefully, continued to put out albums as a trio (never officially replacing Berry)—but can you really name any successful singles from the five albums that came between 1998 and 2011? Can you even remember any of the album titles?

25 years later, Automatic For The People is an unquestionable high water mark for the band, one that has (for the most part) held up very well, and is representative of so much more than just the music found within. While I want to like R.E.M. more than I do (I am simply a passing fan), this is not a record that I would say grew with me through my formative years and into adulthood; despite that, it’s one that I still enjoy listening to now (the singles are still pretty incredible after all this time), and upon this anniversary, it is worth revisiting—as someone returning to it with familiarity, or someone listening for the first time. 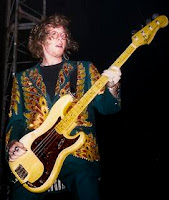 1- It was also in 1993 that bassist Mike Mills also started wearing that green flame suit (as seen at the Video Music Awards, and in the video for “What’s The Frequency Kenneth?” in 1994.)

2- If we’re all still alive in 2019, I hope that R.E.M. continues this reissue campaign and releases a 25th anniversary edition for Monster because I will legitimately buy the shit out of that.


Automatic For The People is out now in myriad editions, via the band's Craft imprint.