Let Me Know When We're Having Fun 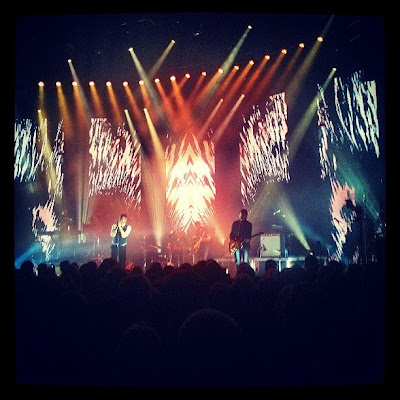 Tomorrow night, my wife and I were supposed to go see The National in St. Paul. It’s their largest headlining show in the Twin Cities—in the last six years, they've gone from playing the now shuttered hole-in-the-wall, the 400 Bar, to the small-ish sized club the Fine Line Music Café, to selling out First Avenue, to playing two sold out nights at First Avenue; now they've achieved “stadium status,” as I like to call it. They have a huge production now—video screens, elaborate lighting, etc, so they are set to play for roughly 5,000 people at the “Legendary” Roy Wilkins Auditorium.

Two drawbacks of The Roy—one, it’s divey. It smells musty inside, and because it’s an auditorium, it’s set up for sporting events. There’s also a concession stand in the distance, distracting you from the show; and two, the acoustics are not that great. I mean they aren’t as bad as the Yelp reviews said they were, but it’s a cavernous auditorium, so things don't sound as pristine as they would in a theatre situation.
One plus of The Roy—they have balcony seating. So when you are a curmudgeon like myself, and hate standing at concerts, you can just buy tickets for the balcony, and you can watch the show in relative comfort.

I say that we were “supposed” to go see The National because we had planned on going, but now it’s just not going to happen. A bulk of why has to do with being realistic about our current schedule—something you certainly don’t think about when you buy tickets for something months in advance.

I wouldn't say that my wife has a demanding job, but there are times where she has to work pretty late to get something finished. She’s a web designer for a marketing and communications firm. The problems come from when she is relying on others for content, and it doesn't get to her in a timely fashion. Such is the case right now—they have a big thing due Wednesday, and she doesn't have what she needs to be working on it. Since this is the case, she is, like, 80% sure she will have to work late on Tuesday, the night of the concert.

But how are we to know this? This is the kind of thing you don't take into consideration when buying concert tickets for something in the future—“Should we go to this show? I mean, Wendy may have to work late this night. Oh well. Best not to make any social plans ever.” 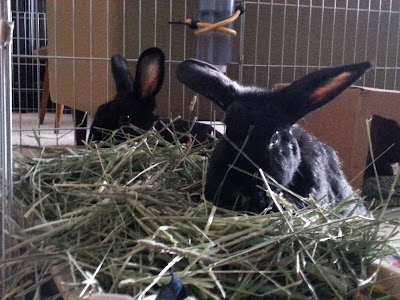 (more than likely, they are up to something.)

A few months ago, back in May, we had a rather extensive wellness and physical exam done on both of our companion rabbits. One of them, Sophie, had a mystery lump on her back that continued to get bigger, so it was decided that it'd be best to have it removed in August. Our Vet’s office is roughly 45 minutes away, so we try to have every appointment scheduled on a Saturday. Just to get this out of the way, I took the first available Saturday in August—three days ago. And I took it thinking that it would be shitty and selfish of me to schedule it later in the month because we had this National concert a few days after the procedure. I also took it thinking that maybe it'd be fine to leave our rabbits alone for the night, or find someone to watch them for a while.

And chances are, they would be fine. However, the evening is when they are most active, and while they’ve been good about it so far, Sophie has to wear a shirt to cover her incision, and we have to make sure that neither she, nor her sister, fuck with the shirt—pull on it, bite at it, etc. Also, there was some horseplay on Saturday night we had to break up, so there were some reservations about leaving them unsupervised in their living area for such an extended amount of time.

So all signs pointed to us going to this concert not being a great idea. Which, really, is not that big of a deal. I mean it sucks that I spent $100 for the tickets, but I found a good home for them to go to. And my wife has seen The National three times already; I have seen them four.

So while my wife was disappointed that her job is kind of dictating her after-hours plans right now, and while I was slightly disappointed we weren't going, I was actually kind of relieved. I say that, because I have a problem with buyer’s remorse and even a bigger problem with concert anxiety.

The two go hand in hand, really. One causes the other, in my case anyway.

I grew up in a pretty rural area, so I only went to three concerts in high school—they were all many hours from my home town; and then I think is saw maybe one or two shows total throughout college (hey, it’s tough to get off campus.) So in moving to a town south of the Twin Cities, even though I’ve been here since 2006, it’s taken a long time for the novelty of being so close to so many concerts to wear off. And to an extent, it hasn't worn off all the way. Although by now, you'd think I'd know better and you think it should have.

Here’s how this almost always plays out—


I'm not exactly sure when this all started—or if it was always a problem, and it’s just gotten worse in recent memory. In fact, I'm uncertain if I can remember a show where not even one of those thoughts was prevalent in mind, thus making it nearly impossible for me to enjoy myself.

A few times since starting this blog at the beginning of the year, I’ve been asked what “Anhedonic” means. It’s a term that most are probably not familiar with, and this was something I actually went into some detail about in a pretty personal piece I wrote for the blog but ended up scrapping in the end. Anhedonia is a condition where you are unable to feel joy from an otherwise normally joyful situation, and it’s a condition that I was formally diagnosed with, and have probably been suffering from long before that. 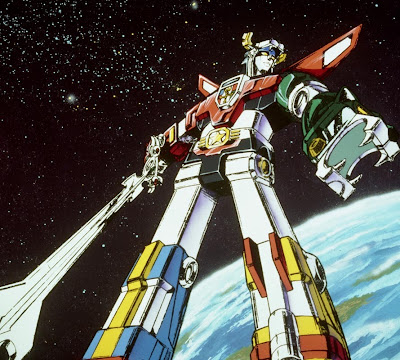 Clinical depression, anxiety, and anhedonia come together, forming like Voltron, making it nearly impossible sometimes to deal with even the most basic of social situations. It makes you selfish—where you will literally do anything, and throw any kind of fit, to get out of something you don't want to do; and it also, as indicated, makes you self-sabotage things that you, at one time, were looking forward to.

Shortly after purchasing tickets to The National concert, and shortly after going to see Sigur Ros at the very same venue in April, I decided it was time to really “break the cycle,” if you will, that I always found myself in. So I had said that unless something MAJOR was coming to town—Radiohead, My Bloody Valentine, David Bowie—that I was going to be taking a break from concerts for a while. This also meant talking myself out of upcoming things that had peaked my interest, knowing full well that nothing would change, and I’d still have a miserable time. There was a shoegaze/noise festival at First Avenue over the 4th of July weekend that I would have loved to have gone to—but who do I know that likes shoegaze enough to go with me?

In mentioning this to my wife, she said, “If you want to do that for your birthday, you should.” “You know I won't have any fun,” I responded. “So what’s the point?”

Electro-country artist Daughn Gibson was coming through the area, playing a show with gloomy post-rockers Merchandise. Again, two acts that I have enough of an interest in to want to see live. But again, who is going to go with me? I had sent information about both of them to my usual “go to” concert buddy, but he never got back to me. But I also never followed up (for obvious reasons.) Of course I wouldn’t have a good time. The show day came and went. I was a little disappointed to read on City Pages the next day that there were only a handful of people at the show. I’m sure my presence would have made all the difference.

It’s not really “comforting” to know that other people feel somewhat the same way—but it is good to know that I am not alone. A friend of mine recently gave up his ticket to see Beyonce at the Xcel Energy Center in St. Paul, because he was afraid he would not be able to deal with the crowd in a giant venue like that, and that his anxiety would cause the people he was going with to have a shitty time. And I mean in general, the issue of personal space is always a sticking point. At a standing room only, sold out show, you are literally ass-to-ankles with the complete stranger next to you. If it’s a low key show, maybe you won't have to deal with too much body contact, but if it’s something dancey, like M83, expected to get grinded upon without warning. So what does this mean? I can't exactly find shows that are on par with my terms—low attendance, near my house, and during the middle of the day. Does this mean that I throw away my social life, vowing to never go to concerts ever again? That seems like I'm overreacting just slightly. But how do I magically get better, and find it within myself to have a good time at something?

That’s not even rhetorical. What’s it going to take for that to happen?