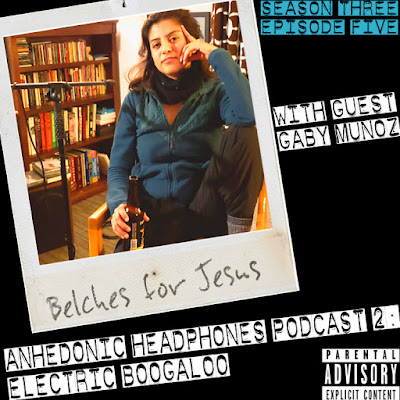 Well, much to my surprise, getting these podcasts out into the world happened a little faster than I thought. Like, it takes a lot to schedule the recording; it takes time to record them; and then it takes a lot of time to edit them down. My intent for this third season was to do six—but because of dat rona, I was unable to figure out how to get my sixth guest over to record his episode prior to, like, social distancing and self-quarantining.

So we have reached the end of season three, and there are a lot of unknowns moving forward with season four, but for now, I've saved the wildest episode for last, as my friend Gaby slid through and chopped it up with me for well over two hours, as we discussed her love of electronic, dance-oriented music, her dislike of incels, and the vibes—specifically if you know them.

As always, listen to the episode below via the lil Podbean streaming doodab, or subscribe to my dumb podcast in all its glory through Spotify, Apple, or Google. Or check out the Podbean page for additional info about this episode, and the 18 others that came before it.