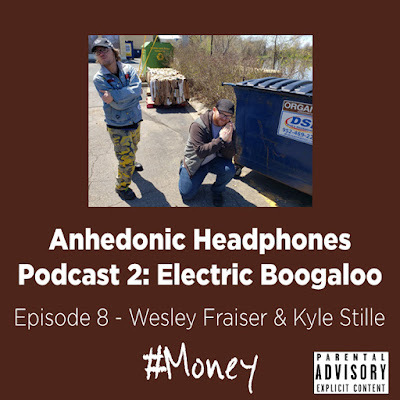 I had wanted to get into double digits of the podcast before I started inviting people back on the show to talk about more music, but right out of the gate, when I asked Wes to be a guest (he was on the second episode) he said he wanted to do one with Kyle (who was the guest for episode four.)

Kyle and Wes have known each other for most of their lives, and have been pretty good friends for a number of years. They warned me it was going to get weird. But it didn't get is weird as it could have. Mostly they just drank soda and talked about the weird novelty music they wanted to select for this episode, and how it soundtracks the late nights of their friendship.

You can listen to it in all its glory via the streaming doodab below, of through subscribing (if you have not already done so) in the iTunes store or in Google Play. You are also strongly encouraged to check out this episode's entry via the Podbean site, for full credits on the music Sara brought in to discuss.
Labels: flannery brothers fuzzy bunny fish fry humor king harvest nostalgia podcast rick and morty soda swiss army man terry folds weird