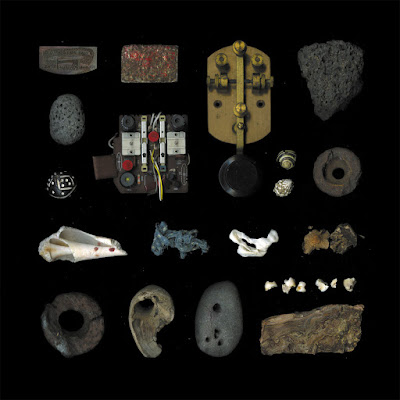 After learning ambient/experimental artist Ian William Craig was releasing a new collection, I knew in advance that it was going to be good and incredibly evocative—but I wasn’t prepared for just how good and how evocative it was going to be, right out of the gate.

There’s a moment shortly after Thresholder begins, and within my first listen of the album, I found I was simply just not ready for the heavy emotional impact that hits you, seemingly out of nowhere.

If you’re listening to the album without paying attention to which track you’re on, this moment seems like it arrives in the space between the first piece, “Elided,” and the second, “Some Absolute Means”—tracks connected by a low rumble of static and dissonance. The moment itself creeps in slowly, as Craig loops and manipulates his voice—it swirls around in the distance creating a strong undercurrent; other, stronger parts of it howling wordlessly, all while the massive sound of an organ continues to build, and build. It creates a state of cacophony so strong that by the time it finally crests, you are well into “Some Absolute Means”—specifically near the four-minute mark, as the piece itself descends into resolution.

But it’s within those first four minutes, give or take, that something powerful happens as the oscillating vocal samples, whooshes of static, and the ominous rumble of the organ—it stopped me in my tracks, and assured me, as if I needed any additional assurance, that I was bearing witness to something very important.

It shouldn’t surprise me, though, that Ian William Craig’s music would do something like this to me, considering the kind of immersive emotional experience I had with him at the start of 2015 through “A Slight Grip, A Gentle Hold (Part 1)” from his breakthrough effort, A Turn of Breath, which was reissued and expanded earlier this year.

Thresholder is a collection of 11 previously unreleased pieces, recorded over the span of time between the release of A Turn of Breath, in 2014, and 2016’s Centres; and while last year’s Slow Vessels found Craig experimenting less and less with loops and manipulations of his own voice, favoring, instead, relatively straightforward (albeit sparse and moody) acoustic songwriting, Thresholder is, from beginning to end, full of the ‘William Basinski meets Bon Iver’ aesthetic that many have come to know and admire from Craig as a composer and performer.

For something that is, more or less, an odds and ends collection, covering a two year period of time, it is worth noting that Thresholder is surprisingly cohesive in sound—or at least, it is able to maintain a very specific kind of atmosphere and tone across all 11 tracks—bringing you into Craig’s carefully crafted environment, and never letting you go until the very end.

All of this hyperbole doesn’t mean that every piece on the collection is as emotionally impactful as the slow burning devastation of “Elided” and “Some Absolute Means.” Nothing include on Thresholder is unsuccessful, per se, but there are some tracks that are more successfully executed than others—and some are more finished, or more fully developed and realized than others.

There are some moments on album that arrive as sketches or fragments: the two-minute “Idea For Contradiction 1” is a bit of an experiment in reverb control, as it finds Craig singing wordlessly in a secret cistern underneath Gothenburg, Sweden—letting his voice swirl and ripple, naturally, through the cavernous, dense stone environment; the last piece, “More Words For Mistake,” by the time it concludes, has the feeling of field recording, as a harsh wind rustles over the microphone—but leading up to that, it is built around a series of small, restrained loops that eventually give way to a large, distorted rumble.

Another impressive element to Thresholder is that, as “Elided” and “Some Absolute Means” appear to be connected seamlessly through tape hiss, the two subsequent pieces—the mournful, haunting “TC-377 Poem” (named after a reel to reel tape machine manufactured by Sony) and “Mass Noun” are also conjoined compositions. “TC-377” finds Craig working with erratic, jittery loops of his voice, creating an unsettling though gorgeous atmosphere; “Mass Noun” is much more ominous in nature, the swirling sounds of the tape machines give way to a distended and dread filled grumble.

There are parts of the album’s second half that are connected as well, following the somber minimalism of “And Therefore The Moonlight”—the combination of affected vocal sampling and unnerving higher tones (possibly created by Craig’s keyboard) from “The Last Westbrook Lament” rival any of the sinister sounding incidental music from the third season of “Twin Peaks”; that piece then effortlessly slides into “Discovered in Flat,” a meditation on all the ways one can distort wordless singing.

Thresholder’s penultimate track, “Idea For Contradiction 2,” finds him diving head first into the torrential dissonance that had only been hinted at in moments earlier on in the album—the kind of all encompassing ocean of noise that I found both so disquieting and alluring the first time I heard A Turn of Breath.

With something so otherworldly sounding as Ian William Craig’s music, sometimes you just have to wonder how is he doing this? While videos do exist of Craig creating his spectral, visceral sounds—just like a magician, it’s best to allow Craig to work within a minor veil of secrecy or mystique, and let the soundscapes he creates speak for themselves, rather than dissect them part by part.

Much like A Turn of Breath, Thresholder is, overall, a wondrous and imaginative listen, filled with emotional moments that will stay with you for long after the hiss of Craig’s tape machines has disappeared.