I Wrote A Thing About Little Acorn Sanctuary for The Wagazine 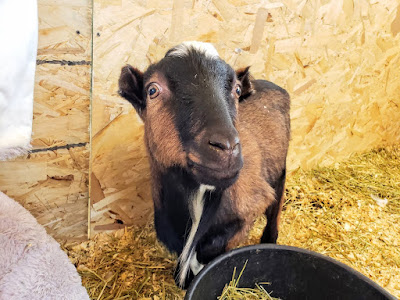 Near the start of the year, in an effort to continue building the relationship I have cultivated with The Wagazine, I told my editor at the publication that I was interested in putting something together for the spring issue.

The assignment I was given was to write a profile of Little Acorn Sanctuary. Located a few miles outside of my town, the sanctuary was started by two women who started taking in rescued farm animals—goats, mostly, as well as a handful of chickens. I spent a portion of a Wednesday afternoon in mid-January speaking with Tara, one of the women who runs the operation, and she was kind enough to take time out of her own day to answer my questions, engage in a thoughtful discussion about animal activism (she, like me, is vegan), and introduce me to the animals they care for.

The spring issue of The Wagazine will be hitting the streets soon, and the content inside is already on the magazine's website. You can read the published version here, or read the original down below. Again, a million thanks to Tara, her family, and their menagerie of animals, and to Ellie for continuing to humor me with opportunities to write.

I started calling them ‘sad days’—the days where I find it’s more challenging to manage my poor mental health, and redirect myself into focusing on something else.

In a text message exchange with my wife, she asks how I’m doing, and I tell her that I’m having a bit of a ‘sad day.’

She responds, “Maybe the animals will help?”

She’s right, of course—about the animals. That tight grip of sadness loosens as I am on the receiving end of seemingly endless kisses from Piper, an energetic, affectionate, and very smiley Pit Bull.

It’s a little easier to let go of that depressive feeling, even for just a little while, when a handsome, curious, and very chatty goat named Martin is playfully bopping his head against the back of my leg.

Little Acorn Animal Sanctuary is located roughly seven miles outside of Northfield, Minnesota, in Castle Rock Township—you turn off the highway onto one dirt road, then, eventually, turn down yet another to get there. The couple who founded and operate the sanctuary, Tara and Becky Lien, along with their two young children, bought the property around two years ago; Little Acorn itself is less than a year old—established as a non-profit during the summer of 2018.

The robotic voice giving me directions from my phone instructs me to stop at the wrong address first—I do not know that I am supposed to take the second dirt road. The address I stop at doesn’t look particularly like an animal sanctuary, and the woman who answers the door is decidedly not Tara Lien; this woman, however, is visibly irritated by how often people mistake her house for the sanctuary, though she is polite enough to tell me to make a turn up ahead.

From the inside of the house, there is a sizzling coming from the kitchen.

I take the second dirt road, and make my way up a long, curving driveway to the Lien family home. After getting out of the car, from a small barn-like building in the sprawling backyard of the property, I see the head of goat, curiously peaking out from the door, as if to say, “Who is this strange man? Is he here to visit me?”

Originally from New Jersey, Tara Lien has lived in Minnesota for a little over a decade—she concedes the winters have taken some getting used to. It’s the middle of January, and cold on the day I visit her at Little Acorn—though not as cold as it will become in the days ahead.

Both Tara and her wife Becky have day jobs—Becky is microbiologist; Tara is a school social worker within a very specialized program. In what is a surprising ‘small world’ story, Tara’s boss is a longtime friend of my wife.

The Lien family moved to Castle Rock Township because they were looking for a place where they could have backyard chickens as pets, more land to garden, and eventually, a couple of goats. The first two goats, Tucker and Riley, were not so much ‘rescued’ as they were purchased, as babies, for $20 each, from very bad situation.

“We drove halfway home and I’m holding these goats,” Lien recalls. “And they are covered an lice and fleas,” adding the animals were in such rough shape, they had to be shaved completely, and given numerous shots and medications from a veterinarian.

The Liens did not set out to become an animal rescue, or sanctuary—but changed with the arrival of Martin.

Martin was born to a goat farmer—but born blind. “Someone posted about him on Facebook,” Lien said. “They are going to dispose of him in two weeks if no one will take him. My wife Becky—she didn’t ask. We didn’t have a conversation. She said we’d take him.”

But the Liens had to figure out how to get Martin from Kansas to Minnesota.

Through social media, seven different strangers volunteered to caravan Martin, from car to car, and after he arrived, Lien recalled this was the moment when she thought she and Becky should ‘go all in’ on the idea of a sanctuary.

Shortly after rescuing Martin, the couple rescued Pancake, whom Lien called ‘the starved goat.’ Once incredibly malnourished, complete with a distended stomach, Pancake is now healthy and thriving—mischievous but well meaning, he is Martin’s buddy, and seems to have the most energy out of Little Acorn’s ‘special needs’ goats.

After Pancake, came Sven, the most sensitive of the group—he struggles with mobility due to frostbite on his legs, as well as a case of overgrown hooves. Since arriving at Little Acorn, he was the recipient of a specially made cart to assist him with getting around, as well as a plethora of oversized stuffed animals he instantly took to cuddling with.

Late in the fall, the Liens took in two Cornish Cross chickens—Hedwig and Snowcomb, and inside the house, the menagerie continues, with the family’s two dogs—the aged, small, but very stoic Rocco, and the most recent addition, Piper, the highly excitable Pit Bull adopted from a rescue in St. Paul.

For the coming year, Lien said she’d like to see Little Acorn grow, but just a little bit.

They haven’t reached capacity yet, and are still able to take on a few smaller farm animals. “I think because we’re so new, getting word out is going to be such a big thing,” Lien said. “My goal for this year is to be able to fundraise to build a bigger barn.”

For any non-profit, no matter what sector the organization may be in, funding for the foreseeable future is always going to be a concern, and Lien understands this. Currently, Little Acorn has a Patreon site, which, at the end of January, reached the milestone of having over 100 sponsors. “Patreon has been helpful because it allows people to give regularly,” Lien said, adding she had begun working with Eureka Compass—a vegan bodega in St. Paul.

“Eureka Compass reached out to us about a philanthropic relationship and partnership,” she said. “They have a lot of knowledge about that kind of thing, so it’s going to be so helpful to get that advice and steer us in the right direction.”

To get the word out about Little Acorn—both for fundraising purposes as well as awareness about their mission, Lien primarily uses the sanctuary’s Facebook and Instagram accounts, regularly posting photos and videos of the animals. The organization’s website is currently what Lien calls ‘a work in progress,’ though through it, you may order Little Acorn merchandise (hats, sweatshirts, t-shirts, et. al) which are produced locally, and are housed in a makeshift gift shop in the front hall closet in the Lien home.

Once winter recedes, Lien said there will be a page on the site for volunteers to sign up and assist on the sanctuary, as well as information on open house-style events where the public can come and meet the animals—previous open houses have been announced via the Little Acorn social media accounts.

Prior to my arrival at Little Acorn Sanctuary, I began following the organization’s social media pages—in going back through enough posts, I got the impression that the Lien family was not only rescuing farm animals, but that they were also vegans—it turns out I was right.

Lien had been a vegetarian since she was a teenager, and has gone back and forth with cutting out eggs and dairy. She said after moving out to their current property, and obtaining a small flock of chickens, she started to learn about chicken hatcheries, and that was the turning point for her. She said Becky, who has also been a vegetarian most of her life, is now “90% vegan.”

The couple’s oldest daughter—nine years old—is also vegan, and has become a very intense, vocal advocate for animal rights; their youngest daughter—seven years old—already a picky eater, is a vegetarian.

Lien said it she tries not to be too pushy with their vegan lifestyle when visitors come out to meet the animals at Little Acorn, adding in an ideal situation, anyone who walks through the door would walk out and no longer use animal products for anything.

“I like to tell people about the different industries and give information,” she said. “A lot of people who come to see us eat meat, drink milk, and eat eggs. I have had people say that since they met our chickens and goats, they no longer each chicken or goats. It’s a step in the right direction.”

She added that, as a social worker, she strong believes in ‘harm reduction,’ and encourages dialogue on what may be considered, by some, to be controversial topics.

“I really want people who have different opinions to come together and have a conversation,” Lien continued. “Being able to have those conversations…I’m unwilling to tiptoe around what I want to say, but it’s about finding that balance.”

After meeting all the residents of Little Acorn, and before I depart, Lien and I chat about my own experiences as a vegan, as well as what it was like living with companion rabbits, and the work I do with the humane society in Northfield—my weekly attempts to ‘socialize’ shy, scared, or stressed out shelter cats.

“I had a cat for years,” she tells me. “I chose her from the rescue because she attacked me when I tried to hold her. I thought she definitely needed a home. And looking back on that, of course this is where we ended up—with all these animals. The ones that nobody wants.”