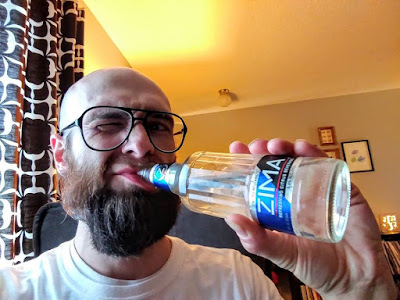 In a sharp contrast to the last two Columns of Disquiet that I've written that were both very personal and possibly a little too heavy handed, even for me, I wanted to try to steer things in different direction this week.

I was struggling with what to write about, and there was a day during the first week of July, when my wife was rattling off all the things that I could write about, and Zima was one of them. But what about Zima, exactly? That was what I had to figure out, and in doing that, it became kind of personal anyway, but maybe funnier than the last two?

Drink up folks. Summer is almost over and Zima is only here for a limited time.
Labels: 1990s alcohol anxiety nostalgia personal essays poorly written thinkpiece The Column of Disquiet the next ten words zima