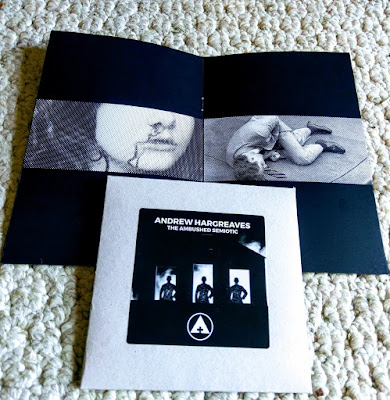 Shortly after The Ambushed Semiotic’s opening track, “Betamarx,” begins, it becomes very apparent why Tape Loop Orchestra mastermind Andrew Hargreaves has opted to release this effort under his own name, rather than the moniker of his other solo project.

Within recent years, Hargreaves has hit a prolific stride with the Tape Loop Orchestra—in 2016, he released two albums under the TLO name: Go Straight to The Light of AllThat You Love, and The Invisibles; last year, along with an odds and ends collection of ephemeral noises (Instrumental Transcommunications), and a studio recording of a 40-minute live composition (Held Against The Light), he compiled a massive boxed set of new and connected material, Solar Light Emissions.

Earlier this year, he continued the ideas and themes from the Solar Light Emissions set with Before The Light (albeit, I slept on that release), and only a few months later, issued The Ambushed Semiotic, a cycle of seven tracks that are independent of his Tape Loop Orchestra output—all drastically different from anything he has done before as an artist and composer, though still familiar enough to those who have followed his growing body of work over the last five to six years.

Hargreaves describes The Ambushed Semiotic as ‘distant pop’—which is about the most accurate and concise way of explaining what occurs throughout the seven pieces included on this limited edition CD. It is a reduction and reconfiguration of ‘pop music,’ and throughout, yes, Hargreaves relies on the usage of tape loop manipulation and ambient drones, but here, he incorporates dusty, broken sounding drum machines and synthesizers to give these pieces a more traditional ‘song’ structure, as opposed to the sprawling, slow moving compositions he’s known for with his TLO canon.

However, that doesn’t mean Hargreaves has made an album of radio-ready bangers—no, far from it, but what Ambushed Semiotic does is work to try and bridge the gap between the ambient and atmospheric with glitchy, but still focused, electronic music.

The most successfully executed, or at least constructed, examples of that can be found throughout—the album’s opening moment, “Betamarx,” pulses along ominously, though playfully, as synthesizers ping-pong off of one another while static and cacophony swirl around underneath; a skittering, hard hitting beat slithers along underneath of “Emotional Regulation,” all while harsh white noise and dulcet synthesizer tones do their best to cover it up; and a dizzying array of warbled samples and manipulations collide and tumble over a reserved, bouncing rhythm on “Artificial Anger.”

The other pieces on Ambushed Semiotic find Hargreaves working within territory that is, not so much ‘less focused,’ or ‘less structured,’ but the constraints feel a lot looser—a track like “Information Economy” blends a number of synthesizer progressions, along with a low, rumbling, and at times bouncing rhythm, and a bed of reverberating dissonance underneath it all. But, because that low and rumbling rhythm isn’t running consistently throughout, it has a different tonal feeling when compared to other pieces included in the collection.

The same can be said for the torrential downpour of synthesizer washes and manipulations of “Fingerprints of Intelligence,” as well the somber and pensive strains of “Liestyle Influenza,” which happens to arrive as the piece that is most similar in soundscape to Hargreaves’ work under the Tape Loop Orchestra name.

At a little over a half hour in running time, Ambushed Semiotic doesn’t overstay its welcome, and throughout the seven tracks, Hargreaves walks a very fine line between music that you can get lost in, and music that is just there. There are times when you are very aware of what is happening, getting completely wrapped up in what is unfolding around you, and there are other times when the pieces are slightly less demanding, and can easily shift themselves, at least for a moment, into the background.

I think it goes without saying that Hargreaves, as the Tape Loop Orchestra, has spent a number of years now composing and assembling a very specific kind of idiosyncratic music, and over the last five years, the project has matured and grown in a number of surprising ways—so in that sense, a ‘solo’ album that deconstructs the idea of pop music shouldn’t be a surprise at all, but it is still a bit of a startling turn.

For longtime fans of the Tape Loop Orchestra, it may take a little bit of time to ease into The Ambushed Semiotic, however, it is a fascinating experience, listening at how Hargreaves is able to, seemingly effortlessly, juxtapose something accessible, or at least the idea of something accessible, with an ocean of reflective discord, focusing on the small glimmers of beauty and wonder that form in the spaces in between.

The Ambushed Semiotic was released as a limited edition CD of 200 copies. Those are all sold out now, but you can buy an overpriced copy via Discogs.