In the winter of 2002, I was in my sophomore year of college; all of 19 years old. Shortly before leaving campus for the holiday break, I blind bought a CD copy of the Bright Eyes record Lifted, or, The Story is in The Soil, Keep Your Ear to The Ground, from Moondog Music, simply based on the glowing review the record had been given in Rolling Stone—they had put it at number four on their list of the best records of the year

This was at least two years before I had been pointed in the direction of Pitchfork, et. al for music criticism—everything I heard about, I heard about through Rolling Stone, Spin, or when MTV2 still played music videos.

I tried with Lifted—I really did. I tried during those final weeks of school before I headed home for Christmas. I tried while driving around in my mother’s car. I tried with my Discman, and my headphones pressed down tightly over my ears.

I tried, but I just couldn’t make it click for me.

There were times that I wondered if I was just ‘doing it wrong.’ “This is supposed to be good, right?,” I thought to myself as I tried to find something worth liking about the album’s sprawling, dramatic opening track, “The Big Picture,” or the frenetic strums of its follow up, “Method Acting,” or the album’s ‘single,’ “Lover I Don’t Have to Love.”

But I couldn’t do it.

I mean, two people, who have never met one another, and will never meet one another, both told me, at different times, that Oberst’s lyrics were like ‘fragile poetry.’

I think I’ve maybe always been predisposed to have an aversion to yelpy singers—it took me a long, long time to make my peace with the Arcade Fire, specifically their debut, Funeral, the yelpiest of the bunch.

I pretty much wrote off the idea of Bright Eyes, and Oberst, himself, in any form, after that December. That copy of Lifted, at some point, found its way to a used CD shop, and despite how he was touted as some kind of ‘new Dylan,’ or a folk/indie savior, I was totally fine sitting out the subsequently released records under the Bright Eyes moniker before retiring the name in 2011.

I never felt compelled to investigate the last decade’s worth of Oberst’s solo output, or his short lived, early 2000’s emo/rock band Desaparecidos, which he reunited in 2015.

I get the impression that I am not missing much—I know I’m in a very small minority on that—but I don’t think it’s for me. 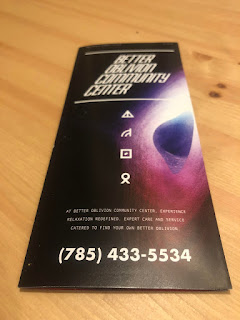 On January 22nd, in the day’s mail, there was a non-descript white envelope with no return address. Postmarked from Indianapolis, I was a more than a little perplexed when I opened the envelope to find a brochure for the “Better Oblivion Community Center.”

With no note included, I was left to skim the brochure itself, and wondered what in the fuck this was, who sent it to me, and why.

The following day’s date, January 23rd, is featured prominently on the inside left flap of the brochure.

A quick internet search of ‘Better Oblivion Community Center’ provided me with a Brooklyn Vegan article that alleged the entire project, elaborate and shrouded in mystery, was a new band featuring Phoebe Bridgers and Connor Oberst—that the brochure itself had been mailed out to music press earlier in the month, and whatever the Better Oblivion Community Center was, ‘it’ was making its debut on “The Late Show” with Stephen Colbert on January 23rd.

The strange thing about Better Oblivion Community Center, the debut release from the band of the same name—the band that, yes, is co-fronted by Phoebe Bridgers and Conner Oberst, is that the content the album is comprised of has little, of anything, to do with the marketing campaign taken on by Bridgers’ label, Dead Oceans.

BOCC is not a ten-song album about dry ice meditation, human empathy, or as the back of the brochure implores you, to ‘Discover True Bliss.’

The album’s roll out—mysterious billboards and brochures in the mail, a vague social media presence, a piss take of a press release that fills in for the product description in the Dead Oceans’ webstore, and culminating with a network television debut—it really feels more like an advertisement for a product than anything else. The performance, a little ramshackle, was complete with VHS tape style effect superimposed onto the final product, an info-mercial telephone number flashed cross the screen occasionally, and a kitschy, pre-recorded audience cut away shot to Bridgers and Oberst, sitting in the crowd, feigning surprise that they’re on camera.

Even in the days that have passed after the album’s unveiling, they’ve managed to keep it up this bizarre act—a music video for “Dylan Thomas” is referred to as a commercial for their ‘cherished center,’ and the band will be ‘holding meetings’ as it goes on tour, asking participants to ‘experience a healing sound bath.’

The fact that Oberst and Bridgers have formed a band together and put out an album shouldn’t be all that surprising—Bridgers opened up for Oberst on his 2017 tour, and he contributed vocals on “Would You Rather,” from Bridgers’ solo debut, Stranger in The Alps.

BOCC was, more or less, recorded in secret over the summer of 2018—roughly the same time Bridgers was working with her other group, boygenius, the trio she formed with Lucy Dacus and Julien Baker. In an interview from “CBS This Morning,” regarding the secrecy surrounding the album, the pair said they wanted it to be a surprise so that listeners did not make any assumptions about what the Better Oblivion Community Center sounded like.

Upon the album’s release, coinciding with the band’s performance on “The Late Show,” critics dubbed it as ‘essential listening’ for fans of both artists, as well as being referred to as ‘soft rock for hard times,’ or ‘tight knit folk rock.’

Spread across 10 songs, almost all of them co-written by Oberst and Bridgers, Better Oblivion Community Center is a record that plays its hand almost entirely too soon, and spends almost its whole 37 minute running time never quite getting comfortable enough to find a cohesive sound, making for an uneven, frustrating listen.

The record opens with one of it’s strongest pieces, the slow burning and evocative “Didn’t Know What I Was in For,” where the first voice you hear is that of Bridgers, slowly painting a vivid picture that becomes increasingly more abstract as it progresses. “My telephone, it doesn’t have a camera—if it did, I’d take a picture of myself,” she sings quietly on the song’s first verse. “If it did I’d take a picture of the water, and the man on the off-ramp, holding up the sign that’s asking me for help.”

It’s a dark song, lyrically—a reflection about the stark juxtaposition between privilege and the actual horrors happening within the world we live in. It’s set to a gently strummed acoustic guitar, what comes off as an e-bowed acoustic guitar (it can be done, I guess), along with minimalistic electronically generated percussive swooshes, and, eventually, a small amount of actual percussion—a number of the album’s drum tracks are provided by Autolux’s powerhouse Carla Azar.

B.O.C.C.’s first single, and perhaps the most infectious song of the bunch, is the album’s third track, “Dylan Thomas.” Thomas, himself, is quoted in the group’s mysterious brochure—“Grave men, near death, who see with blinding sight; Blind eyes could blaze like meteors and be gay; Rage, rage against the dying of the light.”

The song is unrelenting in its rhythm, or the brash, tandem delivery from Bridgers and Oberst with the delivery of the song’s lyrics—“So sick of being honest, I’ll die like Dylan Thomas—a seizure on the barroom floor.” But, Thomas didn’t die from a seizure; he more or less drank himself to death, but also, at the time, was suffering from emphysema, bronchitis, and pneumonia, and was in a coma when he died.

Either way, it’s a gritty image, as is the image conjured up in one of the song’s final lines: “I’m taking a shower at the Bates Motel.”

I’m not really sure what kind of songwriter Connor Oberst has matured into—if he is still writing ‘fragile poetry’ or not, but what’s blatantly missing on B.O.C.C. is the very dark sense of humor that Phoebe Bridgers displayed on both her solo album, as well as her contributions to the boygenius EP. Lyrically, yes, there is a darkness running throughout this record—but it isn’t funny, or clever, and that makes this album a little bit of a challenge. By the end, Better Oblivion Community Center isn’t exactly as thought provoking or attention grabbing as Bridgers is capable of being on her own, or as she was with her other group.

The last of the album’s most memorable material arrives near the end in the form of “Big Black Heart”—a track that features a thick, heavy, and swooning delay on the guitar, creating a dreamy, post-4AD soundscape that begins as a hush, then eventually explodes into a searing cacophony.

Because Phoebe Bridgers has become such an important artist to me recently—I did name Stranger in The Alps as my second favorite album of 2017, and the boygenius EP was in the top three for last year, I stop short of wanting to say that Better Oblivion Community Center is a pretty forgettable outing, but save for the three tracks highlighted here, there isn’t a lot that is going to stick with you after it’s over.

And a lot of what may stick with you isn’t going to do so for good reasons—like the miscast use of synths at the album’s halfway point, on “Exception to The Rule,” or the extremely cloying lyrics of “Chesapeake,” which are among the worst of the album. With that being said, there is a lot of lazy, perplexing songwriting on B.O.C.C.—like Bridgers’ verse on “Dylan Thomas”: “I’m strapped into a corset/climbed into your Corvette/I’m thirsty for another drink,” or “You need an occupation to warrant a vacation without anticipation,” on “Exception to The Rule,” or the eye-rolling “Pulled back the curtains, took in the view—then you showed me the rest of you,” from the opening verse of “Big Black Heart.”

Oberst, now pushing 40, has grown into his voice as best he can—time has made it a little lower, though it’s still yelpy and lispy, coming off like a large, thin sheet of ice that could crack with even the slightest step. I hesitate to say he and Bridgers are an odd pairing, though their age difference doesn’t exactly make them peers who are collaborating—Bridgers is still barely in her 20s; I will say that even though they both make sensitive ‘indie’ music, despite their friendship outside of this project, and despite the Venn Diagram overlap of their listeners, B.O.C.C. is the kind of record that leads one to believe their respective aesthetics and approaches to songwriting are not the kind that can work together with truly successful results.

Calling this record ‘essential’ for fans of both artists is a stretch—this is the kind of record, like so many that buckle under the weight of their own whimsical roll out, that will be remembered more for its release strategy and marketing rather than the actual content itself.